If a federal judge allowed a lawsuit to proceed alleging that police led participants in a far-left protest rally into a gauntlet of violence-prone right-wing counter-demonstrators, and that several protesters were pummeled and hurt as a result, it would be nationally prominent news.

But the national establishment press, and the California press outside of the San Francisco Bay area, have just demonstrated that when the political affiliations of those involved are different, it's not news, even when the aggrieved protesters win a significant court victory affirming their depiction of events.

On Tuesday, pro-Trump supporters at a June 2016 rally in San Jose, California, who allege that police led them into a mob of anti-Trump protesters and then stood by as they were violently attacked, won a major court victory when a federal judge allowed a portion of their legal action against the City and the police officers directly involved to proceed.

(If the American Civil Liberties Union was the organization it claims to be — working "to defend and preserve the individual rights and liberties that the Constitution and the laws of the United States guarantee everyone in this country" — it would be heavily involved in this matter, or at the very least would have denounced the violence when it occurred. Nope.)

In her ruling, federal judge Lucy Koh -- appointed by Barack Obama -- appeared to find plausible pro-Trump demonstrators' arguments that the events which transpired in the aftermath of the San Jose rally occurred as they claimed (bolds are mine throughout this post):

... construing the facts alleged in the FAC in the light most favorable to Plaintiffs, the complaint plausibly suggests that by directing Plaintiffs in a particular direction from the Trump Rally, the police officers exposed Plaintiffs to a danger that they would not otherwise have faced.

... Plaintiffs have sufficiently alleged ... that the police officers continued to direct Plaintiffs in the direction designated by the crowd-control plan after realizing that doing so placed Plaintiffs in serious danger. 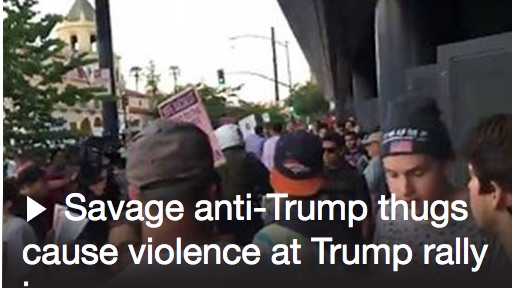 Additionally, as Warner Todd Huston at Breitbart noted, "it is clear she felt that if some of the facts alleged by the plaintiffs turn out to be true, the law will likely be on their side."

Judge Koh previously removed San Jose Mayor Sam Liccardo from the case's list of defendants, while the current ruling removed San Jose Police Chief Eddie Garcia. Nevertheless, the judge decided that the City of San Jose remains potentially on the hook because Chief Garcia effusively ratified the officers' actions (and inactions) even after their violent results:

... (remaining) Defendants were on notice that the state-created danger doctrine applied to police crowd-control decisions.

... the Court finds that Garcia’s statements after the Trump Rally praising the actions of police officers are sufficient to state a claim that the City is liable for the police officers’ allegedly unconstitutional actions in directing Plaintiffs along a particular path after realizing that doing so placed Plaintiffs in danger.

The police officers are still individual defendants despite the general doctrine of public-sector immunity because the judge also found plausible the plaintiffs' claims that "those officers’ actions during and after the Trump Rally after allegedly realizing that the crowd control was placing Plaintiffs in danger."

A Google News search done Sunday at 10:30 a.m. Eastern Time on "San Jose Trump Koh" (not in quotes, past week, sorted by date, showing duplicates) returned only five results. Besides the Breitbart item just noted, there are three stories from San Francisco-San Jose establishment press outlets, and one at the lawyer-targeting Courthouse News Service.

Related searches at the both the Associated Press's main national site and at the New York Times indicate that neither outlet has posted a related story. The Times's omission is particularly glaring, given that on March 13, the day before Judge Koh's ruling, it posted an interview with the "telegenic" Mayor Liccardo as part of a clear effort to place more news emphasis on events occurring inside the once-Golden State and to raise Liccardo's national profile.

The police failure after the San Jose pro-Trump rally in June was so obvious and dangerous that even liberal-media observers at the scene were alarmed. Once such observer was ABC reporter Tom Llamas, an intense anti-Trump antagonist whom then-candidate Trump denounced in August after he tried to PC-shame Trump into abandoning the use of the term "anchor babies." But in San Jose in June, Llamas tweeted that "The police in San Jose have appeared to lost (sic) control. Trump supporters being terrorized and beaten up by mobs of protestors."

Shortly after last June's ugly events, Mayor Sam "Telegenic" Liccardo gave further aid and comfort to the violent anti-Trump hooligans — many of whom have been accused of being paid to be there, and further of being paid by Hillary Clinton campaign operatives — when he blamed Trump for the violence inflicted on his supporters:

The mayor, a Democrat and Hillary Clinton supporter, criticized Trump for coming to cities and igniting problems that local police departments have to deal with.

“At some point Donald Trump needs to take responsibility for the irresponsible behavior of his campaign,” Liccardo said.

In the context of that statement, and even though he has been spared personal involvement, the fact that the current lawsuit by Trump supporters has been allowed to move forward is a sharp rebuke delivered to a man who seems to believe that he and his city are untouchable. Indications are that the city isn't — and if that indeed ends up being the case, Liccardo's political career could suffer some collateral damage.

All of this should be news, but almost no one outside of the San Francisco Bay area would have any idea that this ruling even occurred if it weren't for center-right news outlets and blogs.