On Saturday, President Donald Trump tweeted that "The media has not reported that the National Debt in my first month went down by $12 billion vs a $200 billion increase in Obama first mo." Demonstrating that "fact checking" by the partisan press is a sick joke which has instead turned into a vehicle to make cheap political points, Politifact rated Trump's utterly true statement "Mostly False."

That's it. All the facts are there. They all check out. From a fact-checking standpoint, there's nothing wrong with what Trump tweeted. Politifact's only rational evaluation should have been "True."

But as I said in the opening paragraph, fact-checking is now a sick joke and long ago ceased being a genuine enterprise in objective evaluation.

Trump tweeted, "The National Debt in my first month went down by $12 billion." 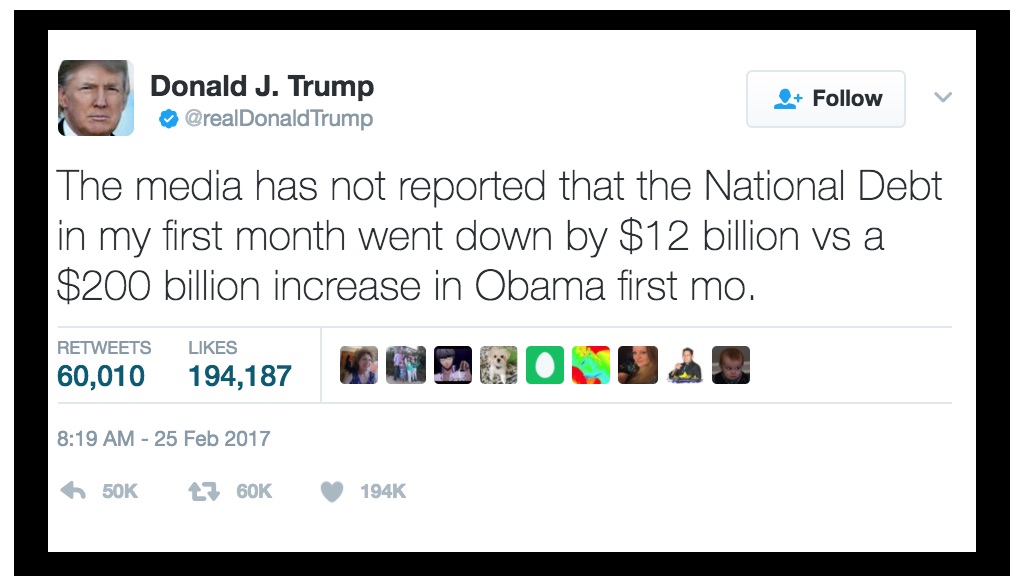 Trump would be wise to not read too much into this figure, which sounds more noteworthy than it actually is. The national debt fluctuates up and down depending on the day. While the debt is "down" after one month, experts say that trend will reverse and the debt will continue to rise.

This factoid is a gross misrepresentation of the state of the debt and the role the new president had in shaping the figure.

We rate this claim Mostly False.

Though the national debt reduction is interesting, unusual and unexpected — increases during the same period during previous eight years have averaged $128 billion, ranging from $54 billion to the just-cited $212 billion – Trump's implied contention (and it's only implied) that the press should have covered the change as a story is weak.

As a Treasury Department spokesperson told me today, there can be any number of reasons why the national debt fell by $12 billion, and virtually none of them would have any relationship to White House actions taken during Trump's first 30 days. This spokesperson also confirmed that Treasury is taking no extraordinary actions to keep the national debt balance low in advance of the debt-limit situation which has to be addressed by March 15, when Congress's debt ceiling suspension expires.

My own investigation leads me to believe that a major contributor to what appears to be a positive development isn't positive at all.

Trump's tweet was at best unusual, given that — unless he knows something we don't know and isn't telling us, which seems highly unlikely — his actions during his first month in office had little if any impact on the result.

Additionally, without further detail, it's also not credible to claim that there has been an alleged "Trump effect," which would involve Americans who have known since November 8 that they have a president whose agenda, unlike his predecessor, is not about imposing ridiculous regulatory and other burdens on individuals, families, businesses and investors, changing their behavior in a way that positively influences federal finances.

If the press had merely said, "Fine, though all of this is true, it's not a story, and here's why," and stopped there, Politifact wouldn't have embarrassed itself (assuming it's capable of being embarrassed) by "fact-checking" an obviously true statement and labeling it "Mostly False." Others in the press could have made points which appear to be quite valid. One could even defensibly claim that Trump may be spending too much time reading center-right blogs which celebrated this non-event a day or two before Trump's tweet instead of running the country.

But the press can't help itself. Everything Donald Trump said must be disputed and (in their fevered minds) thoroughly discredited, with no exceptions allowed.

As long as this continues, sites like Politifact only further discredit themselves and, by association, any others in the media (if there even are any) who are trying to take a more measured approach to covering this new administration.