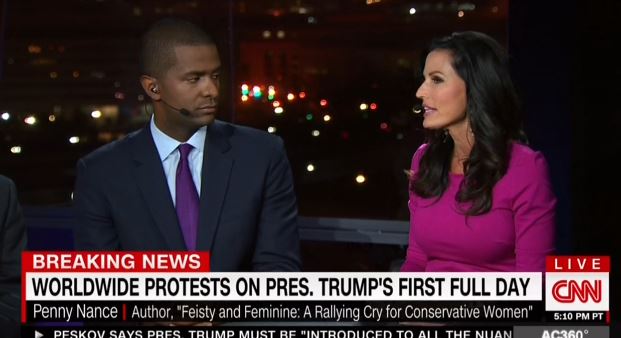 On CNN's Anderson Cooper 360 on Saturday, Bakari Sellers described Saturday's "Women's March" as "something we haven't seen in this country or around this world in a very long time." Concerned Women for America CEO Penny Nance then pointed out the obvious, at least as far as the U.S. is concerned, which is that the Annual March for Life in Washington has routinely drawn crowds in the hundreds of thousands, and that January rallies in other cities, especially on the West Coast, have drawn ever-increasing throngs of prolife Americans.

Nance clearly got under Sellers' skin when she questioned the validity of calling Saturday's event a "Women's March." After trying to laugh her off when she noted that prolife women were excluded, an exasperated Sellers admitted that it was really "a march for liberalism."

Here is the video of the relevant segment (HT The Daily Caller via Gateway Pundit):

Transcript (full program video is here; bolds are mine throughout this post):

BAKARI SELLERS, CNN: But the fact is that people came out today in something we haven't seen in this country or around this world in a very long period of time. This is not anti-Trump. This is pro-America.

PENNY NANCE: Yeah, the March for Life, which has been going on for 43 years, will have about 400,000 (to) 500,000 next weekend. So I'll need all of you back here to have this same conversation next weekend, because that is ignored on a regular basis.

This is not new. I welcome it, by the way. I believe in the First Amendment. Anytime women and men get together and show their beliefs and strongly support their candidates or whatever that is, that's fantastic it's good for America. But this was not a women's march.

NANCE: Pro-life women were told: "Need not apply." We were not welcome here. Kellyanne Conway was not invited to speak at this march.

Concerned Women for America was not welcome — why are you laughing? — it's a women's march, we should have been included. We are not.

SELLERS: It's not about women. It's about liberalism.

NANCE: And therefore, women are not, women are not monolithic. This is the same group of progressives who have been all along fighting against Donald Trump and conservative values. And they're welcome to do it, but let's not misname it.

SELLERS (after several attempts to interrupt): Listen. We can actually cast this aside, we can castigate it as if it's not something that's not true —

NANCE: No, I say great. You're welcome.

SELLERS: It's fine. We're going to have 400,000 people her who march here who are prolife, and I appreciate that —

COOPER: Penny's point is that it shouldn't have been called a women's march. It seems like you're arguing past each other. Do you have any issue with what it was billed as?

SELLERS: Not at all!

No, Anderson Cooper, it's not "okay."

Sellers had no problem calling Saturday's event a "women's march" because in the liberal mindset, anyone who is prolife — in fact, anyone who does not unconditionally support abortion on demand — is not a genuine woman. Only women with far-left views are considered genuine women, and his provoked admission that it was a "march for liberalism" proves it.

Penny Nance did a very nice job of drawing the truth about Saturday's march and the feminist agenda out of the condescending and arguably misogynist Bakari Sellers, who may have thought she would wilt or become unhinged after hearing him laugh at her. Instead, she got to him.

As to Nance's reference to the same old progressives who have been fighting all along, it was certainly that, with the same involvement of George Soros-backed organizations one almost inevitably finds behind these enterprises.

At the Women in the World blog at the New York Times (of all places), Asra Q. Nomani, who says she voted for Donald Trump, questioned the alleged the “huge, spontaneous groundswell” behind the march, and found that it was far from spontaneous (links are in original):

I know — and most of America knows — that the organizers of the march haven’t put into their manifesto: the march really isn’t a “women’s march.” It’s a march for women who are anti-Trump.

... I stayed up through the nights this week, studying the funding, politics and talking points of the some 403 groups that are “partners” of the march. Is this a non-partisan “Women’s March”?

Roy Speckhardt, executive director of the American Humanist Association, a march “partner,” told me his organization was “nonpartisan” but has “many concerns about the incoming Trump administration that include what we see as a misogynist approach to women.” Nick Fish, national program director of the American Atheists, another march partner, told me, “This is not a ‘partisan’ event.” Dennis Wiley, pastor of Covenant Baptist United Church of Christ, another march “partner,” returned my call and said, “This is not a partisan march.”

Nomani found that the "nonpartisan" claims were rubbish:

Following the money, I pored through documents of billionaire George Soros and his Open Society philanthropy, because I wondered: What is the link between one of Hillary Clinton’s largest donors and the “Women’s March”?

I found out: plenty.

By my draft research, which I’m opening up for crowd-sourcing on GoogleDocs, Soros has funded, or has close relationships with, at least 56 of the march’s “partners,” including “key partners” Planned Parenthood, which opposes Trump’s anti-abortion policy, and the National Resource Defense Council, which opposes Trump’s environmental policies. The other Soros ties with “Women’s March” organizations include the partisan MoveOn.org (which was fiercely pro-Clinton), the National Action Network (which has a former executive director lauded by Obama senior advisor Valerie Jarrett as “a leader of tomorrow” as a march co-chair and another official as “the head of logistics”). Other Soros grantees who are “partners” in the march are the American Civil Liberties Union, Center for Constitutional Rights, Amnesty International and Human Rights Watch. ...

Nomani updated her post with a response from the Open Society Foundation which, in essence, said, "We didn't write any checks for the women's march, and what the groups we fund do with the money we give them is their business." Uh-huh.

Nomani, who is Muslim, even noted — with supreme irony given the CNN video above — that "Ironically, CAIR (the Council on American-Islamic Relations) also opposes abortions, but its leader still has a key speaking role," leading to this conclusion:

The left’s fierce identity politics and its failure on Islamic extremism lost my vote this past election, and so, as the dawn’s first light breaks through the darkness of the morning as I write, I make my decision: I’ll lace up my pink Nikes and head to the inauguration, skipping the “Women’s March” that doesn’t have a place for women like me.

Only liberal women who buy into the entire agenda need apply.