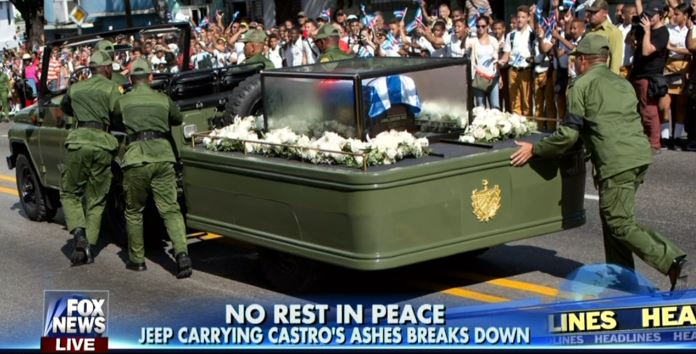 A funny thing happened on the way to delivering Fidel Castro's ashes to their final resting place. According to an Associated Press photo caption, soldiers had to "push the jeep and trailer carrying the ashes of the late Fidel Castro after the jeep briefly stopped working during Castro’s funeral procession near Moncada Fort in Santiago, Cuba."

FoxNews.com had a sense of the symbolism: "The breakdown of the jeep in the midst of adoring crowds chanting 'Long live Fidel!' was symbolic of the dual nature of Castro's Cuba." AP news reports did not. They were too busy being awestruck by the "near-religious farewell to the man who ruled the country for nearly 50 years" to mention such a contradictory detail.

The FoxNews.com report says that the AP "contributed" to it, but certainly not anything related to the jeep's breakdown. A search at the AP's main national site on "Castro jeep" returned only one current item, a timeline report covering the events which noted that at 8:55 a.m. that "The Russian jeep that carried his ashes across Cuba could be seen leaving the cemetery around 8:50 a.m., and military officers outside the cemetery said the ceremony had ended." The AP didn't tell us whether the jeep was seen moving under its own power.

An unbylined, four-paragraph item filed Sunday evening whose purpose appears to be to tease subscribing outlets into buying photos is where the wire service truly went overboard (bolds are mine throughout this post):

AP PHOTOS: IN CUBA, A NEAR-RELIGIOUS FAREWELL TO CASTRO

In Havana's Plaza of the Revolution, hundreds of thousands paid tribute to images of Fidel Castro and signed oaths of loyalty to the socialist system he created. On the lonely roads of eastern Cuba, crowds waited for hours to salute the casket holding his ashes.

For four days, Associated Press photographers documented the mourning by Cubans as Castro's ashes were carried across the island to their final resting place. It was a near-religious farewell to the man who ruled the country for nearly 50 years.

President Raul Castro said Saturday that Cuba will bar statues of Castro and monuments bearing his name, in keeping with the former leader's desire to prevent the growth of a cult of personality. But for those watching state media, where Cubans endlessly described Castro in messianic, almost god-like terms, a cult of personality already seemed well underway.

The "near-religious" reference to Castro is especially appalling when one recalls that he exercised extremely tight controls over religious expression until the early-1990s. Even now, according to the U.S. State Department's 2015 International Religious Freedom Report, "(the) government monitored religious groups, and the Cuban Communist Party, through the Office of Religious Affairs (ORA), continued to control most aspects of religious life."

As to developing a cult of personality around Fidel Castro, Cuba doesn't need to work on it. The U.S. media and far-left U.S. academics have already done that for them.

A separate detailed late-evening dispatch by AP reporters Christine Armario, Andrea Rodriguez and Michael Weissenstein was a bit more restrained, but definitely had some over-the-top moments:

A wooden box containing Fidel Castro's ashes was placed by his brother and successor on Sunday into the side of a granite boulder that has become Cuba's only official monument to the charismatic bearded rebel who seized control of a U.S.-allied Caribbean island and transformed it into a western outpost of Soviet-style communism that he ruled with absolute power for nearly a half century.

The private, early-morning ceremony was attended by members of Fidel Castro's family, the ruling Politburo of the single-party system he founded, and Latin American leaders who installed closely allied leftist governments in Venezuela, Bolivia, Nicaragua and Brazil.

After nine days of fervent national mourning and wall-to-wall homages to Castro on state-run media, the government barred independent coverage of the funeral, releasing a handful of photos and brief descriptions of the ceremony later in the day.

... Mourning for Castro has been fervent and intense across the country since his death, particularly in rural eastern Cuba, where huge crowds have been shouting Castro's name and lining the roads to salute the funeral procession carrying his ashes.

"All of us would like to put Fidel's name on everything but in the end, Fidel is all of Cuba," said Juan Antonio Gonzalez, a 70-year-old retired economist.

It appears not to have occurred to any of the three AP reporters that failing to express anything less than "near-religious" ardor for Fidel Castro might affect a person's ability to avoid the serious problems associated with getting tagged as a troublemaker by the country's "collective surveillance" apparatus.

Similarly, it wouldn't have occurred to these reporters to see any symbolism in the breakdown of the jeep carrying Castro's ashes in a country whose citizens haven't had a chance to buy a new car for well over a half-century. This is, after all, the Associated Press, where Castro may be dead, but the "Cuban 'Revolution' Has Never Ended, and Lives On."