His announced presence received a decidedly mixed reaction from the play's audience, followed by a public lecture from a cast member with the full cast present after the play's curtain call. Naturally, President-Elect Donald Trump took umbrage, and tweeted his displeasure at Pence's rude treatment.

Saturday, in a story which ultimately appeared on the front page of Sunday's print edition, Patrick Healy at the New York Times treated the cast's boorishness as — not kidding — a "showdown" which supposedly set off a "furious debate over American principles."  Here is the lecture Pence received from the stage after the play's conclusion:

'HAMILTON' CAST MEMBER BRANDON VICTOR DIXON: Thank you so much for joining us tonight. You know, we have a guest in the audience this evening — and Vice President-elect Pence, I see you walking out but I hope you will hear just a few more moments.

We have a real message here and we hope that you will hear us out.

And I encourage everybody to pull out your phones and tweet and post, because this message needs to be spread far and wide, okay?

Vice President-elect Pence, we welcome you and we truly thank you for joining us here at Hamilton, an American musical. We really do.

We, sir, are the diverse America who are alarmed and anxious that your new administration will not protect us — our planet, our children, our parents — or defend us and uphold our inalienable rights, sir. But we truly hope this show has inspired you to uphold our American values and to work on behalf of all of us. All of us. (Applause)

Again, we truly thank you for sharing this show, this wonderful American story told by a diverse group of men [and] women of different colors, creeds, and orientations.

Note that Dixon didn't refer to "all colors, creeds and orientations," because he couldn't. That's because, in violation of "the policy of Actors Equity, the Broadway union," the play's producers issued a casting call for only "non-white" performers.

Excuse the cynicism, but was Dixon's plea to "pull out your phones and tweet and post" rooted in activism, or a desire to lengthen the play's run?

Trump tweeted his displeasure Saturday, doing what anyone would hope his or her boss would do when rudely treated in such a public way by his or her hosts, in the process turning a few of the social justice warriors' favorite precious terms back on them:

Based on Healy's writeup, there must have been fainting spells in the Old Gray Lady's newsroom when its members learned of Trump's tweets, which in their fevered minds have moved the nation close to a crisis. The headline and Healy's first paragraph demonstrate that this assessment is no exaggeration:

A surprising confrontation erupted on Saturday between President-elect Donald J. Trump and the cast and creators of the Broadway hit “Hamilton,” setting off furious debate over American principles like free speech, respect and the ability to challenge authority in the Trump era.

It wasn't a "confrontation" or "showdown." Trump merely observed that the Vice President-Elect was rudely treated, and firmly requested an apology.

Naturally, that apology will never come. Dixon's response, as the Times reported:

@realDonaldTrump conversation is not harassment sir. And I appreciate @mike_pence for stopping to listen.

Last time I checked, a "conversation" involves at least two people who can speak to each other. Dixon had the stage and a sound system. Pence didn't. Dixon delivered a one-way public lecture, secure in the knowledge that Pence couldn't respond.

Pence and Trump got some support from a seemingly unlikely source mid-day Saturday, when Stevie Van Zandt, a member of Bruce Springsteen's band who is no fan of the incoming administration, called the treatment the Vice President-Elect received "bullying," emphasizing that "You don't single out an audience member and embarrass him from the stage."

As to the Times's opening contention that the incident has set off a "furious debate over American principles like free speech, respect and the ability to challenge authority in the Trump era" — what utter nonsense. Paraphrasing John Hinderaker at Powerline, the only question open to some (but really not much) debate, is this: "Are there any liberals out there who aren't insufferably rude and arrogant?"

In the fantasyland Healy built, the actors are the victims. The poor, put-upon cast claims that they "could barely go on stage the day after the election." The Times reporter pathetically tried to tie Dixon's lecture into bigger-picture matters involving post-election "demonstrations," and couldn't resist the opportunity to deliver yet another round of tired, stereotypical tropes about Trump, his electoral victory, and his incoming administration.

Here are just a few items from Healy's horror which presented that outlook:

... The clash between the “Hamilton” actors and Mr. Trump captured the sharply divergent feelings of many Americans 11 days after the election: a showdown between the values of multiculturalism on the left, including the racially diverse “Hamilton” cast and the world of entertainment, and the conservative principles of the incoming Republican administration, which was backed strongly by working-class white voters and traditional Republicans. 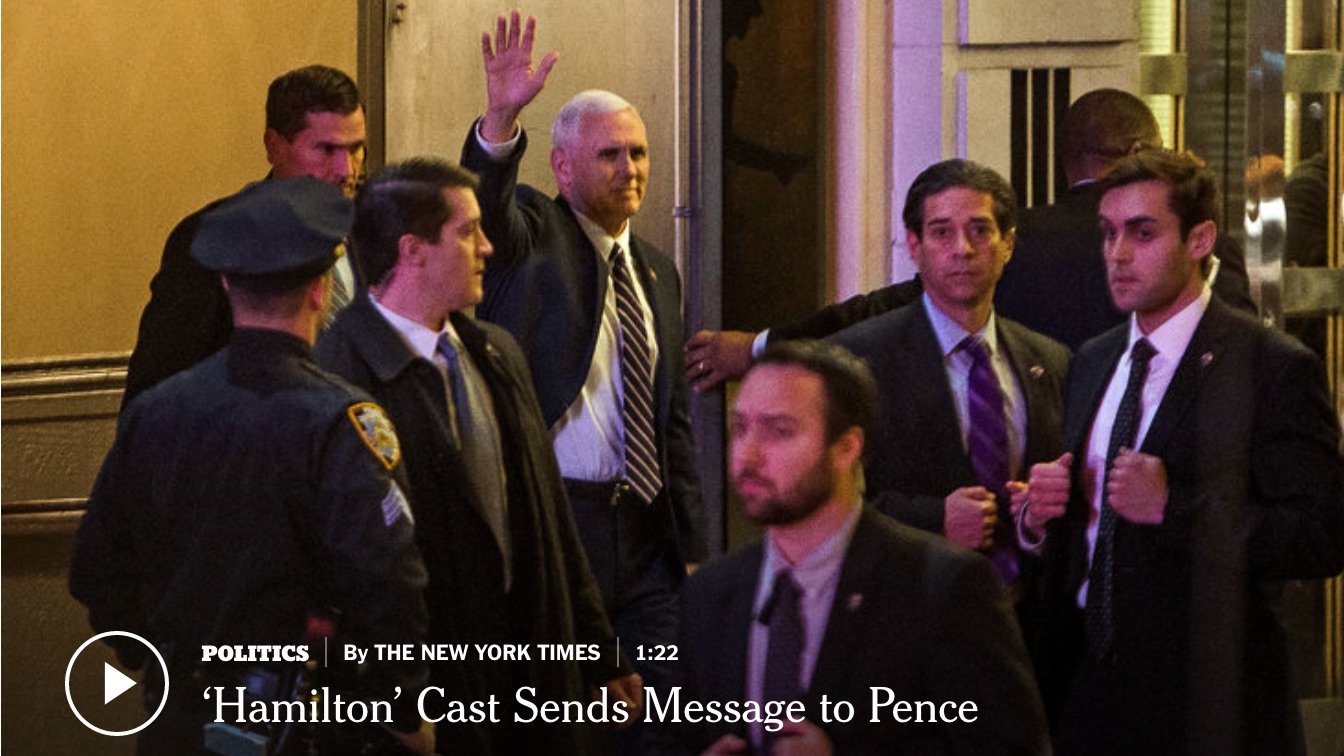 ... His (Trump's) maneuver, in two posts to Twitter early Saturday, stunned the cast members and, judging by social media, jolted many Americans who are worried about the president-elect’s tolerance for dissent after a campaign in which he was criticized for inflaming racial tensions. But it also touched off reaction among other Americans who treasure the traditions of, and respect for, the office of the presidency.

... The values and politics championed by the cast are in conflict with the remarks and actions of Mr. Trump (i.e., a de facto admission that there is now viewpoint diversity — Ed.), who has called for deporting undocumented immigrants, has declined to forcefully denounce expressions of bigotry among his allies and has so far appointed only white men to major cabinet positions. He has also pledged to change libel laws and sue news media organizations whose coverage he does not like, and he has demonized street protesters who have criticized him.

... Mr. Trump lashed out at the show, the most acclaimed Broadway production in years, at a time of demonstrations against his coming presidency. Those include frequent street protests outside Trump Tower ...

As noted earlier, Trump didn't "lash out" at the show itself in any way. He demanded the common courtesy adults expect, but naturally didn't get it from the show's liberal children. (Update: Early Sunday morning, after the Times dispatch was published, Trump tweeted that he hears that "Hamilton" is "highly overrated," and repeated his call for an apology: "The cast and producers of Hamilton, which I hear is highly overrated, should immediately apologize to Mike Pence for their terrible behavior.")

Healy did get one thing right: "The statement from the “Hamilton” cast on Friday was, on one level, a breach of theater protocol." Yes it was, and when you boil it down, that breach, directed at a Vice President-Elect, really should be the only story here. Imagine if a red state theater cast had done something similar after a play President Obama or Vice President Biden attended.