The national press is predictably failing to describe the true nature of the post-election "protests" and of the "protesters" involved who are upset at the presidential election's result.

We've seen versions of this movie before, repeatedly. As fellow NewsBuster Jeffrey Lord said on CNN yesterday, it's been going on for 50 years — only there are now more tools available to detect what we've always suspected.

The primary features seen in the Portland, Oregon "protests," where the worst of the rioting has occurred and where this post will therefore focus, are these:

It was rioting — and it has happened several nights

The Associated Press is giving "protesters" priceless free publicity and encouragement by creating daily summaries of "protests" around the nation. With one exception, which it attributed to a police description, the wire service has resisted calling what has happened in Portland a "riot." The new term: "destructive protest."

In a city that has seen large and destructive protests, a few hundred students from several schools walked out of class to gather in the rain near City Hall.

The group held signs saying "Students for change" and "Love trumps hate." They marched across a bridge, some of them climbing up it, while officers stopped traffic.

It was peaceful, following smashed windows and other vandalism at recent rallies. Daily demonstrations have led to $1 million in damage and more than 100 arrests.

A protest organizer says activists were contacting counterparts in New York, Boston, Washington, D.C., and other cities in an effort to stop Trump from prevailing on his issues.

As will be seen later, the goal goes beyond "stop(ping) Trump from prevailing on the issues."

Failure to communicate the degree of the destruction

We should be seeing more tweets like this one after Thursday's rioting, but we're not:

Most involved did not vote

KGW in Portland is reporting that the majority of those arrested during the riots have something in common with San Francisco 49ers quarterback and national anthem kneeler Colin Kaepernick — they didn't vote:

More than 70 percent of the 112 anti-Trump protesters arrested in Portland didn’t vote in Oregon, according to state election records. The other approximately 30 percent did cast a ballot in Oregon or in another state.

At least seventy-nine demonstrators either didn’t turn in a ballot or weren’t registered to vote in the state.

KGW compiled a list of the 112 people arrested by the Portland Police Bureau during recent protests. Those names and ages, provided by police, were then compared to state voter logs by Multnomah County Elections officials.

Records show 39 of the protesters arrested were registered in the state but didn’t return a ballot for the November 8 election. Thirty-six of the demonstrators taken into custody weren’t registered to vote in Oregon.

By the way, Kaepernick wasn't registered to vote either.

Local and state officials fail to do their jobs

Arrests were made, but as KGW reports in the video below, charges were not filed due to a claimed paperwork overload. The reporter in the video relays the city's message that charges may be reinstated later and that everyone got a potentially expensive "traffic citation." Excuse me for being skeptical:

Perhaps the "paperwork" issue is real, but that begs the question of why the National Guard wasn't called in, as the Oregon Republican Party demanded on Sunday to no avail (even that call was tardy), to free up the cops to complete it.

The problem here is that a far-left mayor and governor don't seem to mind the violence and destruction because it furthers what they must believe is a far more important objective, namely to create the false impression of a popular groundswell against Trump even taking office — and yes, that is the "protesters'" goal.

Readers here will of course ridicule the idea that preventing Trump from being inaugurated is even possible, but that's not the immediate point. The point is that doing so is the stated goal of those in Portland and around the nation, and that the professional protesters involved are taking advantage of a large number of breathtakingly ignorant people to advance that cause.

In the second half of the video above, the reporter, Pat Dooris, interviews an 18 year-old who was among those arrested. Surely not knowing any better, he let it be known that preventing Trump's inauguration is the ultimate goal, while singlehandedly and inadvertently making a case for raising the voting age back to 21 (Warning: This dialog may temporarily lower readers' IQs):

REPORTER PAT DOORIS: Thij Bowen is 18 years old. He voted for Clinton in his first-ever presidential election. He could not resist joining the protests. 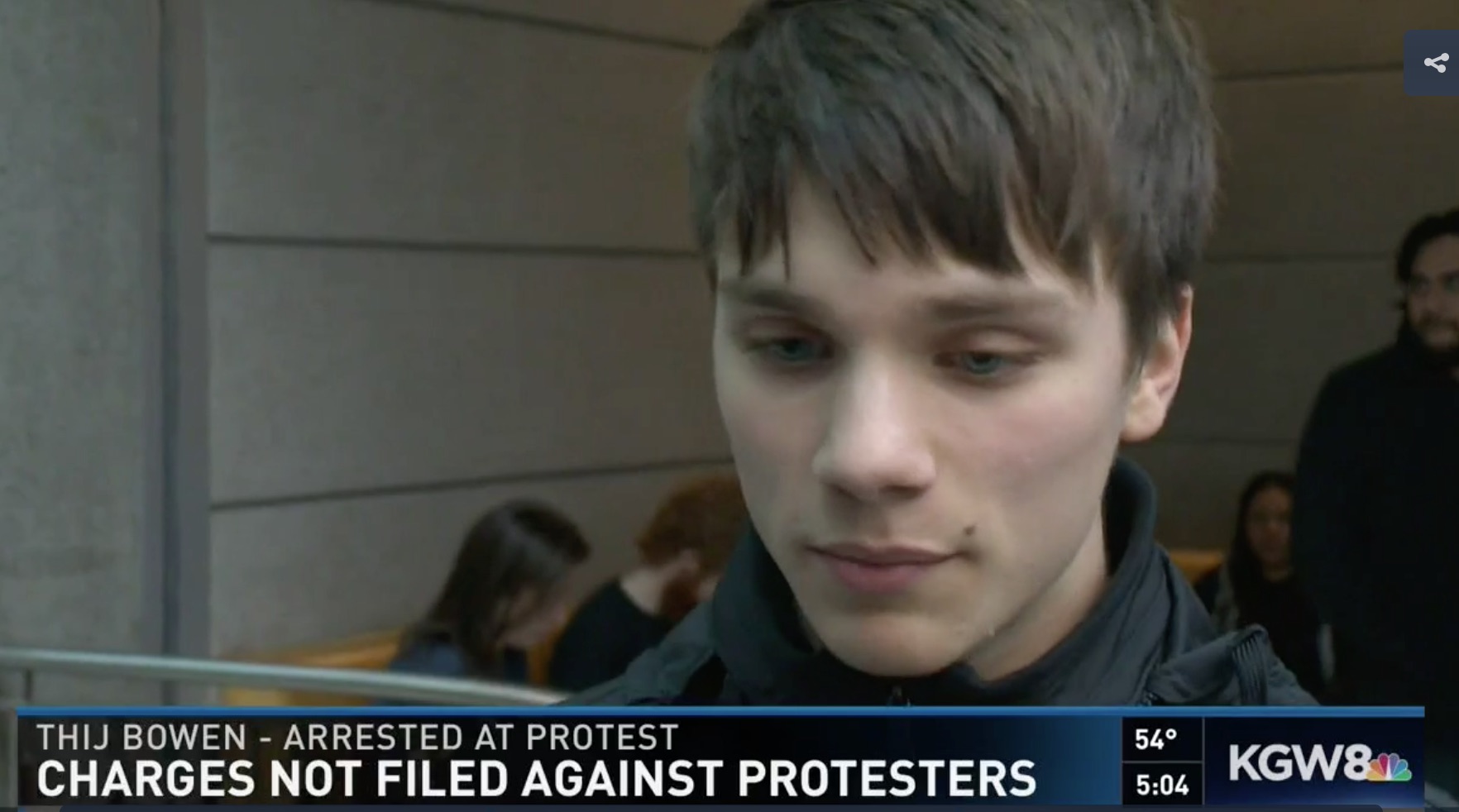 THIJ BOWEN: I was protesting because, um, well, one because, um, it's it's a community type of thing and the whole city was kind of agreeing on it, so it's been going on for five days already, and I think it will be going on for a few more days.

DOORIS: His mother said the family is Dutch. Her children grew up speaking four languages, and learning it is important to be involved in your community. Ty hopes the protests somehow keep Trump out of the White House.

BOWEN: I don't agree with his standpoints. I think he's not intelligent enough to be president. So I wanted to stand up right before it's too late. So right now is when you've got to show your support for somebody else.

DOORIS: He had his criminal charges dropped today. They can always be added back later for him and the others. In addition to that, everybody got a traffic citation today, which carries a potential fine of up to $1,000.

Yeah, this 18 year-old who, at least in this interview, could barely put coherent thoughts together, denigrates the intelligence of a guy who built a hospitality industry empire and pulled off one of the biggest electoral upsets in U.S. history.

Note, however, that Bowen stated the goal to Dooris, who it appears had to string together the thought for him, namely that the idea is to "somehow keep Trump out of the White House."

He didn't come up with that idea on his own. Instead, stopping Trump's inauguration is clearly what "protest" organizers are deluding these poor saps into believing they can accomplish. Thus, I would expect that they will attempt to continue "protesting" on a nearly daily basis until Inauguration Day, and that they will by that time have convinced an establishment press eager to do so anyway into writing that Trump is a "polarizing" figure (favorite press buzzword) even before he takes office.