Former NPR CEO: Abandoning Objectivity 'Is the Price to Pay' to Defeat Trump

A Wednesday column at Vanity Fair by former National Public Radio CEO Ken Stern started on a promising track, but ended up in the same place as the rest of the establishment press: Donald Trump must lose, even if the press has to abandon all semblance of fairness and objectivity to accomplish that task.

Stern observed the obviously unbalanced presidential race coverage at the Washington Post with its "incredible array of (Donald) Trump-phobia" and "virtually no mention of Clinton or any other candidate." But then, as will be seen after the jump, he basically justified it all, while vainly hoping that establishment press can somehow pick up the pieces when the election is over (and, presumably, Hillary Clinton has won).

Stern served as a handsomely paid high-level executive at NPR for 8-1/2 years.

An eight-year stint as Chief Operating Officer seen as successful was followed a short six-month reign as the organization's CEO. At that point, in early 2008, he was forced out, apparently because of "anxiety among local stations" that the national organization was siphoning off its audience with its own online and other efforts. During his CEO term, he announced plans for a new NPR headquarters. Completed in 2013 for $201.7 million, it drew sharp criticism for its opulence, especially given NPR's significant reliance on taxpayer funding. Stern is currently President and Co-Founder of Palisades Media Ventures, a media consulting firm.

Here are key paragraphs from Stern's Vanity Fair column (bolds are mine):

MAYBE THE RIGHT-WING MEDIA ISN’T CRAZY, AFTER ALL
After Trump, can the media escape the confirmation bias trap that it has set for itself? 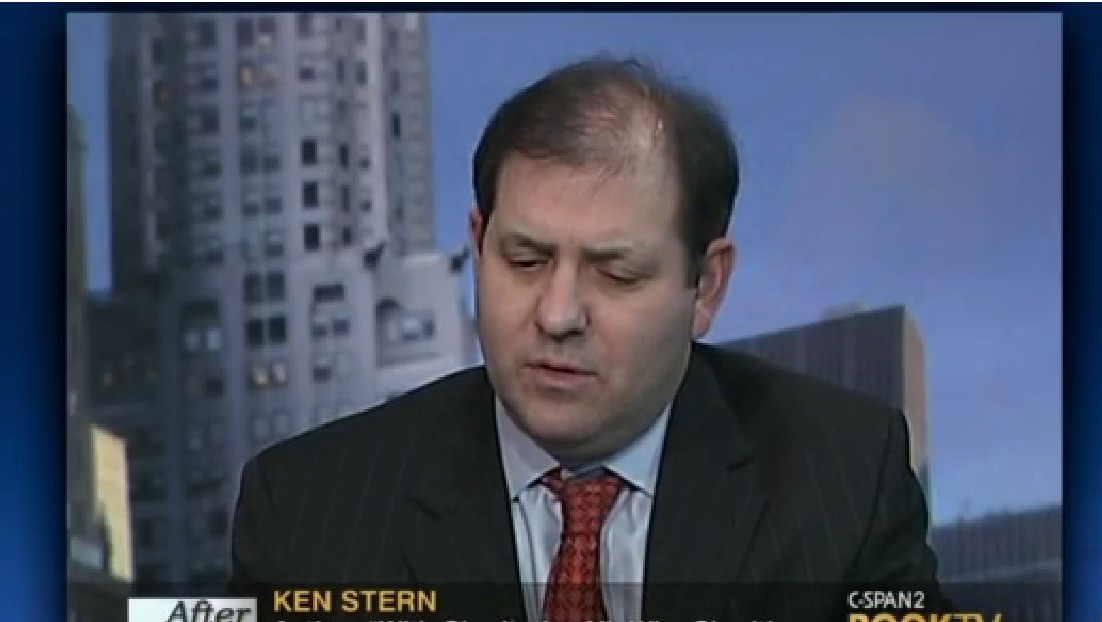 ... When I checked the news the other day ... I counted some 20 articles about the presidential race, each espousing the unequivocal view that one candidate is collapsing due to moral failings, financial improprieties, and complete and utter lack of judgment and ethics. Notably, I was not reading Breitbart. Instead, I was reading The Washington Post, delivered to my doorstep, and the attacks were squarely waged not against the Clintons but rather against Trump.

... If you think this is limited to the National News portion of the paper, you would be mistaken. The Metro section, which typically reports on the Washington, D.C. area, was headlined by a news article describing the dysfunction at the Trump campaign in Virginia and a column arguing that Trump watching should be rated R for children. The top article in the Style section sported a massive feature on the Trump meltdown, supplemented by a column attacking Steve Bannon, the C.E.O. of the Trump campaign and the former head honcho at Breitbart. The sports section featured a column attacking Trump and defending, of all things, locker-room culture. Only the Health section lacked a Trump hook. (Trump, as you may recall, temporarily banned WaPo reporters from his campaign events.)

Rather remarkably, there was virtually no mention of Clinton or any other candidate running for president on this particular day. And so I repeated this little thought experiment again last week and the results were largely the same. The Post should not be blamed for criticizing a candidate who has demonstrated xenophobic, racist, and sexually predatory behavior. But even at the end of perhaps the worst stretch of weeks for a candidate in modern American electoral history, perhaps 45 percent of the electorate, some 55 million voters or so, still will vote for Trump. And some of them may wonder if the Post put their fat thumbs on the electoral scales.

Very few among the 55 million, and likely quite a few more, aren't "wondering," Ken. We know that the Post and the rest of the establishment press have "put their fat thumbs on the electoral scales." Many journalists have openly declared their intent to do that, while most of the rest have made their intent obvious in their words and deeds, up to and including colluding with Democrats and the Hillary Clinton campaign to coordinate their messaging and to present them in the most favorable possible light.

Continuing, as Stern descends into fantasy, but observes that his former journalistic icons are no longer trying to be presenters of "a balanced view" (as if they ever really were):

... there has always been, at the very least, a concerted effort at places like The New York Times and The Washington Post to offer a balanced view, even if that effort is occasionally undermined by inevitable group think and lack of connection with parts of the country.

This effort, whether or not it satisfies a Breitbart or Fox audience, has always set them apart from partisan media like the Washington Times. But this election is different: for the first time in my memory, some of the major media organizations in this country have now abandoned all semblance of objectivity in furtherance of electing Hillary Clinton, or perhaps more accurately, in furtherance of the defeat of Donald Trump.

Well no, not really, he says, while he effectively predicts that Mrs. Clinton will win:

... Having helped successfully scuttle the nomination of one candidate, it may be terribly tempting for our leading organizations and media outlets to seek an encore performance.

There is additional complexity here. We have typically understood the media debate in this country as being waged between right vs. left. But that vertical division within our politics has been replaced by a more dystopian horizontal battle line. Many media consumers now perceive our political struggle as being disputed between establishment members and outsiders, somewhat divorced from political perspective.

... Trump is an affront to American democracy and common decency, and if this is the price to pay for keeping him out of the White House, so be it. But there is most certainly a price to pay. The next time Fox News or Breitbart caterwaul about media bias, the claim will have substantially more bite to it.

No Ken, the claim about media bias has now been proven absolutely true beyond any reasonable doubt. 75 percent of the country sees it, recognizing that the press wants Mrs. Clinton to win; only 8 percent think they want Trump to win (and I would argue that many of them are leftists deliberately lying). There's little if any chance that the establishment press even cares any more about how they're perceived. Barring a sea change both in leadership and in the journalistic trenches, the press will henceforth consider the price paid in forfeited credibility worth it if they can stop people like Trump, as well as Ted Cruz and Mike Huckabee, against whom Stern, in unexcerpted text, believes the press would likely be just as aggressively hostile and unfair.

The establishment press clearly sees its role as opposing outlets like Fox, Breitbart and others, and is working with the establishment controlling the levers of political power to suppress them. It infuriates them that outlets like Fox and Breitbart are "stealing" their once captive audiences. It is beginning to dawn on them that they can't win a fair, free-market fight and keep operating as they would prefer to.

Stern claims not to be longing for the "good old days," but he wraps up his piece by decrying the "fragmentation" of the news audience and the fact that "Audiences are increasingly seeking, and demanding, news that fits their personal notion of what is important and what is true." He worries about the survivability of "a democracy that depends on some notion of shared values and common discourse."

The problem, of course, occurs only because people won't accept objective truth. Unfortunately for Stern, it's the establishment press which routinely attempts to substitute its own "facts" for what is obviously and objectively true (See: Politifact, Snopes and any number of other left-wing "fact check" sites), and then shrieks hysterically at anyone who dares to show them that they're objectively wrong as fanatical liars.

Trust me, Ken. There are far larger elements of craziness and far less open-mindedness in the establishment press's newsrooms than there is in the mainstream center-right.