The left continues to insist that voter fraud is a myth, specifically that "voter fraud is very rare, voter impersonation is nearly non-existent," and that "most allegations of fraud turn out to be baseless."

Part of the support system for that insistence comes from the press, where reports of election fraud routinely get ignored or downplayed.

One particularly egregious example of this has to do with Democrat Andrew Spieles in Virginia. A local paper reported on September 15 that Spieles has admitted to turning in voter registrations for 19 dead people in Virginia. As far as I can tell, it took two weeks for anyone in the national press to give the story any attention — and no other national press outlet has.

The original story about fraudulent registrations appeared in James Madison University's student newspaper, The Breeze, which would not name the person involved "to avoid connecting the accused student with any campus organizations."

Translation: Spieles, as we'll see later, is a Young Democrat on campus, and the paper didn't want to embarrass that group. One doubts that they would have been so accommodating to a conservative or Republican organization.

It's clear that The Breeze knew who and what it was protecting. It already knew of Spieles, having included him in a March story about a mock Student Government Association presidential debate with students impersonating the then-five remaining candidates from both parties. Spieles played Ted Cruz.

The Harrisonburg, Virginia Daily News Record, which is a subscription site, picked up the story and did name Spieles, but not in the small portion of reporter Tony Brown's dispatch the paper made publicly available online:

HARRISONBURG — Authorities say a James Madison University student confessed that he acted on his own for nonpolitical personal reasons when he filed voter registration applications in the names of dead people, not on behalf of the voter registration organization he worked for.

But two sources close to the FBI and Harrisonburg Police Department investigation said Thursday that agents are continuing to carefully examine all applications turned in since February by the HarrisonburgVotes registration-drive organization, “just to be thorough."

Spieles, the "James Madison University student" (identified in Brown's third sentence), can "say" whatever he wants, but there are only two conceivable motivations for turning in fraudulent voter registrations, neither of which are "personal."

The first would be to enable people who aren't the persons being registered to vote in their name. The second would be to test the system to see if such registrations will be processed and posted. The second motivation could theoretically be honorable, equally as honorable as when videographer James O'Keefe proved in 2012 that anyone could go "into (then-Attorney General Eric) Holder’s voting precinct in the District of Columbia and "obtain Eric Holder’s ballot." Of course, O'Keefe did not cast the ballot. But it's far more typical that registrations are filed in other people's names in the hope that either the review process for registrations is inadequate, that the review doesn't get completed by Election Day, or that the registration is now active and available for future election tampering.

That was the modus operandi of the old ACORN, which did token work in housing tax assistance as a cover for its primary mission of corrupting the voting system until O'Keefe's heroic videos in 2009 led to its shutdown. (This author is fully aware that local outfits and operations doing what ACORN once did are still present in many metro areas throughout the country.)

Given that the left is far more interested in compromising the integrity of the voting process to increase "access" than in ensuring that there are adequate controls in the system, any action relating to submitting false voter registrations has to be considered "political" in some sense.

Republicans in the Virginia House have posted the remainder of Brown's Daily Record story, which identified Spieles, and reads as follows:

HarrisonburgVotes co-founder Joe Fitzgerald identified the student as senior political science major Andrew Spieles. One of the sources close to the investigation confirmed the identity of the suspect. Fitzgerald said he fired the student immediately after the suspect confessed on Aug. 15, and contacted authorities the following day. 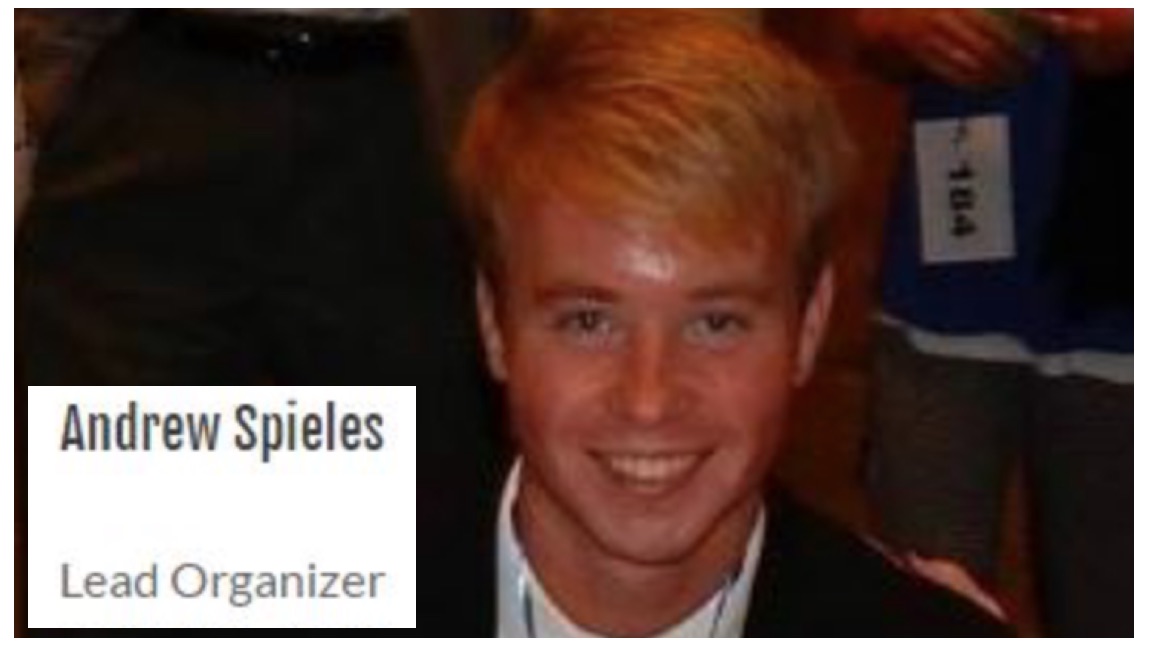 “He’s smart, and he understands the [political] process,” said Fitzgerald, a prominent local Democratic politician who founded HarrisonburgVotes with lawyer Tom Domonoske, a member of the nonpartisan Harrisonburg School Board. “Who the hell knows what his motivations were?”

A Harrisonburg lawyer believed to represent the suspect would not confirm or deny that he is counsel for the student.

One of the highly placed sources said the investigation began when the Harrisonburg Registrar’s Office alerted authorities to suspicious applications.

It remains unclear who, if anyone, will be charged. City Director of Elections Deborah Logan said she will turn in all applications found to be false to the Harrisonburg Electoral Board so that they can be disqualified.

The only evidence of any national press interest in Spieles appeared two weeks after the Daily News Record story broke on September 29 in the Washington Post at its Virginia Politics blog. Although the story has a human interest element, it is otherwise woefully incomplete:

He fought in World War II. He died in 2014. And he just registered to vote in Va.

The FBI and local police are investigating how at least 19 dead Virginians were recently re-registered to vote in this critical swing state.

One case came to light after relatives of a deceased man received a note congratulating him for registering, Rockingham County Commonwealth’s Attorney Marsha Garst said Thursday.

“His family members were very distraught,” said Garst, who confirmed the existence of the FBI and police investigation but said she could provide few details because the case is ongoing.

All 19 were initially registered as voters in the Shenandoah Valley city of Harrisonburg, although a clerk double-checking the entries later raised questions about one. She recognized the name of Richard Allen Claybrook Sr., who died in 2014 at age 87, because his son is a well-known local judge. She happened to recall that the judge’s father had died.

“He was a retired Fairfax County elementary school principal and had fought in World War II,” said his son, retired Harrisonburg General District Court Judge Richard Allen Claybrook Jr. “So our family is very disgusted that they would pick his name, because he was such a law-abiding citizen devoted to public service.”

All of the forms had been submitted by a private group that was working to register voters on the campus of James Madison University, according to the Harrisonburg registrar’s office. The group was not identified. No charges have been filed.

The Post's Laura Vozzella didn't even name Spieles, let alone identify him as a Young Democrat. She didn't even name HarrisonburgVotes, the "private group ... working to register voters," claiming it was "not identified." Well, maybe the registrar's office isn't allowed to identify the group, but as noted, two newspapers, one on campus at JMU and the other the town's local paper, did identify HarrisonburgVotes.

The Daily Record and The Breeze also identified Joe Fitzgerald, the HarrisonburgVotes head who everyone is presumptively believing was unaware of what Spieles was doing, even though he was a "lead organizer" for the group. But the Post's Vozzella did not.

Readers will be completely unsurprised to learn that Spieles name was found in no relevant story at any establishment press outlet in a Google News search on his name. As usual, the only outfits exhibiting meaningful interest in the details of this matter have been on the center-right, which have gone back to the original stories and spread their details throughout the land.

As I noted on Thursday, there is no way to reliably claim that voter fraud doesn't exist or is extremely rare in today's no-excuses-needed absentee voting environment, and absolutely no way to believe that in a 100 percent mail-in balloting state like Washington, where a local TV station reported on Wednesday that "(Washington State) elections officials say the state's elections system operates, more or less, under an honor system."

It's clear that the national establishment press is determined to keep those ugly truths away from the vast majority of the American people.