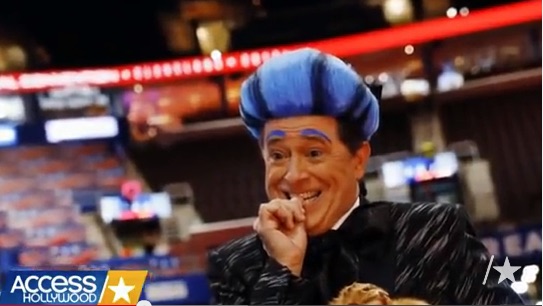 CBS News has fancied itself as a serious, hard-news operation since the days of Walter Cronkite. For all of its heavily documented bias, and though it's now handicapped compared to its Big Three and Fox competition by not having a cable affiliate, it has generally covered and treated the major party conventions as important national events.

So one would think that someone at what used to be known as the Tiffany Network would have persuaded Stephen Colbert, an alleged comedian who has so completely stopped being funny that his late-night show is regularly finishing at or barely above third in the 18-49 ratings to both Jimmy Fallon and Jimmy Kimmel, to stay away from the site of the Republican National Convention. Nope.

If CBS News tried to talk the squanderers of David Letterman's Late Show audience down, Colbert and his show's producers didn't listen. They're in Cleveland all week. Failing that, you would think that the newsies might have suggested a bit of decorum. If so, that didn't fly, either.

So on Monday, Colbert, dressed like a dolt, and took to the stage to conduct a mock convention opening.

Colbert's stage crash, which appears to have taken place several hours before scheduled fesitivities began, given that few if any seats in the arena were occupied, received a smattering of cheers from those present.

The video below appears to capture only a portion of Colbert's appearance:

STEPHEN COLBERT: He has formed an alliance with Indiana Governor Mike Pence.

Sorry, I blacked out there for a moment.

So it is my honor, to hereby launch and begin the 2016 Republican National Hunger for Power Games!

Look, look. I know I'm not supposed to be up here. Honest. Neither is Donald Trump.

As seen after Colbert was forced offstage, the person taking the video, or someone standing very close, thought that his stunt was hilarious.

Given that those on hand at that point would have primarily been party officials, security personnel, and some members of the media, I wonder (no, not really) who thought Colbert's crassness was funny? Perhaps some of them were even employees of a formerly serious news operation called CBS News.

Though Colbert got some of the attention he craved from Access Hollywood, it's hard to imagine that this will help his show's ratings. It seems more likely to hurt them, especially since he once again made a mockery of his claim that he "didn't want to be a political champion" when his show lauched last year. Uh-huh.

Does anyone believe that the crowd reaction would be similar if a comedian who leans center-right, e.g., Tim Allen, were to try the same stunt in Philadelphia before the opening of the Democratic National Convention this coming Monday?