One of the more important elements of the establishment press's daily routine is protecting leftists, particularly members of the Obama administration, when they say really dumb things. They do this by not reporting them.

Reacting to Tuesday afternoon reports that Russian hackers have successfully breached the Democratic National Committee's computer network and stolen files, particularly the "entire file" of opposition research on presumptive GOP nominee Donald Trump, White House Press Secretary Josh Earnest childishly blamed congressional Republicans. Yeah, really. If a White House spokesman attempted something this absurd during a Republican or conservative administration, it would already have been the subject of jokes on Tuesday's late-night TV shows. Naturally, Earnest's idiocy has only been documented at a few center-right blogs and outlets.

According to the Washington Examiner (HT Doug Powers at MichelleMalkin.com), Earnest's blame game went as follows:

The White House reacted to reports that Russian hackers penetrated the Democratic National Committee's computer network by complaining that Republicans have blocked additional money for funds to enhance the nation's cybersecurity. 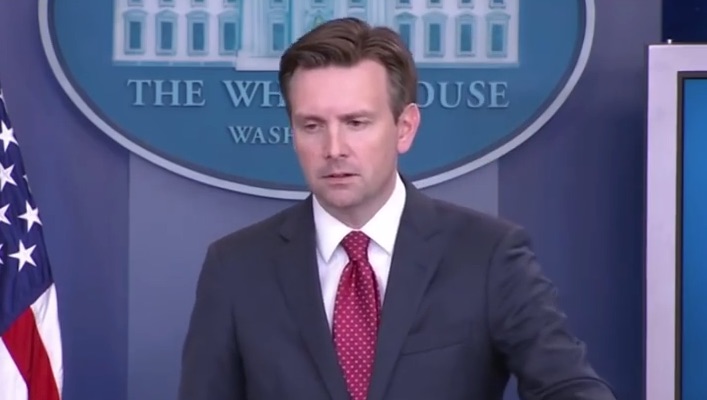 "This administration takes our nation's cybersecurity quite seriously," press secretary Josh Earnest said, referring to a proposal in the president's budget that would increase resources to guard the nation against hacks of this nature.

"Republicans for the first time in 40 years declined to even hold a hearing on that specific budget proposal, which means that the president has put forward a specific plan, laid out exactly how he believes we should pay for [enhancing] our nation's cybersecurity, and Republicans in the House and Senate have indicated they don't even want to talk about it," Earnest said. "So, that's rather disappointing."

As if extra elaboration is necessary, cybersecurity protections at the national level cannot possibly protect those who fail to take the necessary steps to protect themselves. That, not "national cybersecurity," was the problem at the DNC, according to someone said to be in a position to know, as Byron Tau and Damain Paletta reported at the Wall Street Journal late Tuesday afternoon:

The DNC had relatively weak cybersecurity protections considering the scale of interest from foreign adversaries, a person familiar with the matter said. Foreign hackers attacked U.S. presidential campaigns in 2008 and 2012, so the DNC should have known it would be a target this year as well, this person said.

Though it has been predictably downplayed in the press, the Obama administration's irresponsiable nonchalance about cybersecurity and identity protection, particuarly in regards to the late-2013 rollout of Obamacare, goes back years, and is beyond dispute. Then there's the matter of presumptive Democratic Party presidential nominee Hillary Clinton's use of a private server while she was Secretary of State — a server her people still insist was never breached, even though they had to shut down their systems in response to attacks, and even though a guy nicknamed Guccifer and the Russian government are both said to possess thousands of her system's emails. That the DNC isn't properly protecting itself shouldn't surprise anyone.

The three main establishment press reports on the DNC breach at the Associated Press, the Washington Post and Reuters do not mention Earnest's immature reaction to his party's failure to protect its data. The New York Times posted the AP and Reuters stories at its web site, appears not to have included them in Wednesday's print edition, and only included the breach as a virtual afterthought in its "Tuesday Evening briefing."

I found no evidence as of 10:30 Wednesday morning that any of the four outlets mentioned in the previous paragraph have noted Earnest's remarks in updated or subsequent reports.