In a properly functioning news environment, where genuine journalists recognize important news and report it without first screening its relevance through a PC filter, the deaths of volunteer firefighter Peter Hacking and his two young daughters in a car crash near Wylie, Texas last week would have become a widely covered national story by now. Sadly, virtually the only reason it's known at all outside of Texas is because a center-right media outlet learned of it, and Matt Drudge has headlined it.

Given the prominence of illegal immigration in the two major parties' presidential contests this year, and the death of Kate Steinle at the hands of an illegal immigrant who had previously been deported several times in the sanctuary city of San Francisco last year, the Hackings' deaths should be national news.

Why? Because the person drove the other car and whom authorities believe was clearly at fault was also in this country illegally, and had also previously been deported.

The Dallas Morning News and several other Texas outlets reported the three deaths on Thursday. At the time, the names of those in the other vehicle, but apparently not their immigration status, were known:

A Nevada volunteer firefighter and two children died Thursday in a crash that shut down State Highway 78 in Wylie, the Texas Department of Public Safety said. 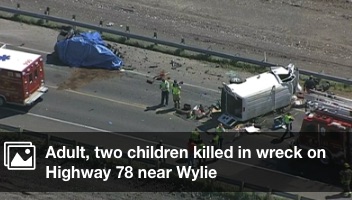 A van traveling south on Highway 78 swerved into the northbound lane, striking a car. It was not clear what caused the van to swerve, Haschel said.

All three people in the car died at the scene, including fire Capt. Peter Hacking, 36, and two of his children, 4-year-old Ellie and 22-month-old Grayson.

“It is with great sadness that we announce the loss of a beloved father, husband and firefighter,” the fire department said in written statement. “We appreciate the outpouring of condolences and support from our neighboring departments and community.”

The people in the van — driver Margarito Quintero, 33, and passengers Fransico Rameriz, 34, and Rigoberto Cruz, 19 – were taken to Baylor Regional Medical Center at Plano with serious injuries.

Hacking was an employee of A.H. Belo Corp., the parent company of The Dallas Morning News. He had worked with the company since 2008 and was part of the IT applications team that supported circulation and marketing groups.

The Dallas-Fort Worth CBS affiliate reports that "Last year, Hacking was Volunteer Firefighter of the Year," and that "because the three people in the van remain in serious condition, they haven’t been able to talk to them yet to find out what happened." Looking at photos from the crash, it's astonishing that anyone survived.

Coverage of the original crash also appeared at the web sites of Fox News stations in Austin, Metro DC, Atlanta and Phoenix.

The same CBS affiliate, with the help of a radio station's reporter, appears to have broken the story of the driver's illegal alien status on Tuesday:

Sources tell CBS 11 News the male driver of the van who killed Nevada volunteer fire Captain Peter Hacking and his kids did not have a driver’s license and will be charges (sic) with Criminally Negligent Homicide when and if he recovers from critical injuries.

KRLD’s LP Phillips confirmed with ICE on Tuesday evening that the driver is in the country illegally.

According to ICE, Margarito Quintero entered in the country in 2006 & was deported in 2008.

ICE had not (sic) contact with Quintero until the accident last week.

Captain Hacking, his four-year-old stepdaughter Ellie and 22-month-old son Grayson died on Highway 78 in Lavon, after being hit head on. The 36-year-old firefighter left behind a widow, a 9-year-old son and four stepchildren.

Breitbart.com has picked up the story. A Google News search on Peter Hacking's name (in quotes, sorted by date) shows no national establishment press interest in the story at all, let alone its latest developments. Of course, the Associated Press and the New York Times have nothing. Their PC filters, especially the one that dictates that "thou shalt not report negative news about anyone who is here illegally unless absolutely forced to by wide coverage elsewhere," are quite strong — especially when it could become a presidential contest topic which, if widely known, would make the illegal immigrant amnesty movement look really bad.