On Wednesday, at a joint press conference with Argentine President Mauricio Macri in Buenos Aires, President Obama told the world that it can defeat the Islamic State "in part by saying, you are not strong; you are weak."

Fortunately for him and unfortunately for those who wish to be fully informed, the establishment press is almost always there to save Obama from himself. Google News searches indicate that fewer than 3 percent of outlets felt that Obama's naive belief that telling IS that "you are not strong" is part of a genuine strategy to defeat the group should be relayed to their audiences.

A Google News search at 11:45 a.m. ET this morning on [Obama "you are not strong"] (typed exactly as indicated between brackets, during past week, sorted by date, with duplicates) returned fewer than 30 items, precious few of which were from establishment press outlets. A more generic search on "Obama Argentina" (not in quotes, same parameters) returned more than the maximum number (1,000) Google will list. Thus, the 3 percent conclusion noted above is valid.

One of the wholly predictable news organizations which failed to report Obama's embarrassing statement was the Associated Press.

Oh, AP was there, as its timeline entry at 1:50 p.m local time yesterday demonstrates (bolds are mine throughout this post):

He says groups like that can't destroy or defeat America, and they don't produce anything. Obama says the terrorist organization is made up of vicious killers and murders (AP meant "murderers" — Ed.), and they have perverted one of the world's great religions. Obama says a primary goal of the Islamic State group is to strike fear and disrupt civilized societies.

But he says it's very important that societies not respond with fear.

Obama commented at a news conference with Argentine President Mauricio Macri, one day after the Islamic State group claimed responsibility for terrorist attacks Tuesday in Belgium that killed more than 30 people.

Based on reviewing other Obama-related dispatches from Argentina, either Josh Lederman, Kathleen Hennessey or both filed that entry.

As will be seen in the following full-context excerpt from the joint press conference, Obama was not referring to the United States in his statement; he was referring to a vague "us." Given that the most recent terrorist attack occurred in Brussels, he clearly meant for "us" to include more countries than the U.S. (numbered tags are mine):

Q. President Obama, in the wake of the Brussels attacks, [1] you obviously thought a lot about whether to go ahead and attend that baseball game yesterday in Cuba and to continue on to Argentina and complete this trip. But you're catching some flak from some political critics at home. And I'm wondering, would you walk us through why you decided that this was the correct course in terms of optics and message? What is that message?

And finally, on the trip, it seems to me that both in Cuba and in Argentina, you are seeking to roll back some of the maybe overreach or interventionism of the Cold War era. I'm wondering, now that you're here, whether that's shaping your views on intervention in Syria and a plan B.

And, President Macri, President Obama believes that normalizing relations with Cuba will give the U.S. a lot more credibility and leverage around Latin America. [2] I'm wondering if you also believe that's true. And will you both commit to attending the Olympics in Brazil, no matter what happens with its stability? Thank you. 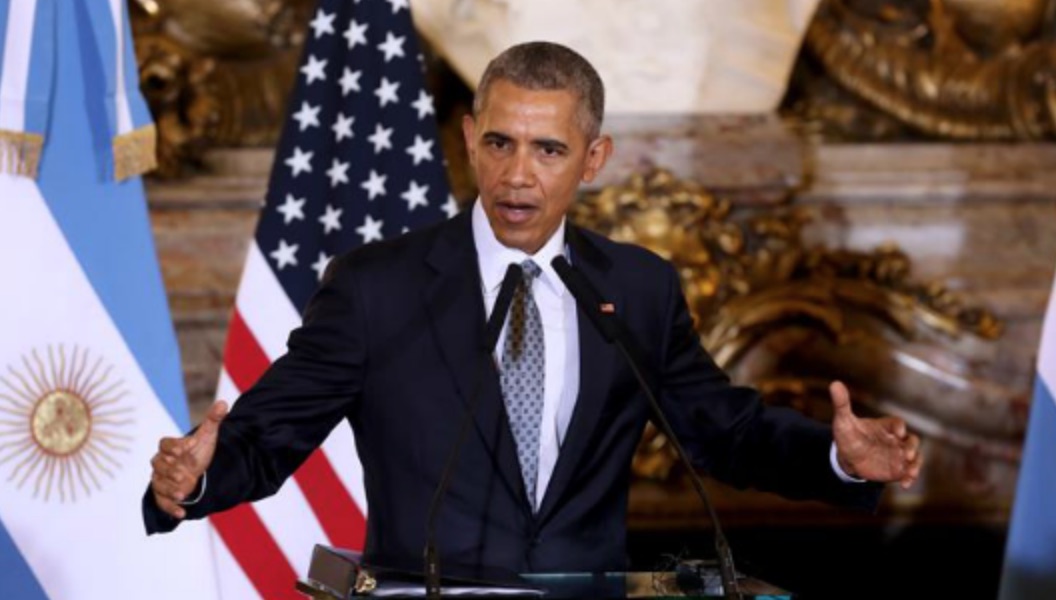 PRESIDENT OBAMA: Margaret, I addressed this issue a little bit at the baseball game when I was interviewed by ESPN, but let me reiterate it. Groups like ISIL can't destroy us, they can't defeat us. [1] They don't produce anything. [3] They’re not an existential threat to us. [4] They are vicious killers and murderers who perverted one of the world’s great religions. [5] And their primary power, in addition to killing innocent lives, is to strike fear in our societies, to disrupt our societies, so that the effect cascades from an explosion or an attack by a semi-automatic rifle.

And even as we are systematic and ruthless and focused in going after them -- disrupting their networks, getting their leaders, rolling up their operations -- it is very important for us to not respond with fear. As I said, that's hard to do because we see the impact in such an intimate way of the attacks that they make. But we defeat them in part by saying, you are not strong; you are weak. We send a message to those who might be inspired by them to say, you are not going to change our values of liberty and openness and the respect of all people. [4]

And I mentioned at the baseball game yesterday, one of my proudest moments as President was watching Boston respond after the Boston Marathon attack, because they taught America a lesson. They grieved -- I was there for the memorial. We apprehended those who had carried this out. But a few days later, folks were out shopping. [6] A few days later, people were in that baseball stadium and singing the National Anthem. And “Big Papi” was saying what he felt about Boston -- Boston Strong -- and how a terrorist attack was not going to change the basic spirit of that city. Well, at that moment, he spoke about what America is.

And that is how we are going to defeat these terrorist groups. In part, because we're going after them and taking strikes against them, and arresting them, and getting intelligence on them, and cooperating with other countries. But a lot of it is also going to be to say, you do not have power over us. We are strong. Our values are right. You offer nothing except death.

[1] (tagged twice)  — The question was about "the wake of the Brussels attacks." Obama's response relating to "us" certainly had to include Europe, and, contrary to what AP claims, includes no specific reference to America. The fact that he used a U.S.-based example in the remainder of his remarks doesn't change that.

[2] — The reporter is characterizing Obama's position correctly. How coddling a ruthless dictatorship gives the U.S. "more credibility and leverage" in countries which mostly have or aspire to have representative governments is a mystery. Macri's answer (not excerpted) was predictably diplomatic, but at least mentioned "the Cuban youth who want more freedom, to find more partners around the whole world."

[4] (tagged twice) — This "existential threat" term is getting intensely annoying.

At one level, one could Obama of essentially saying, "Well, even though they're a legitimate threat to kill and injure us randomly and almost at will, they're not a threat to wipe us out, so what's the big deal?" That's easy for a guy with a Secret Service detail and the entire intelligence and defense apparatus there to support his continued existence to say.

But let's look at the "milder" definition of "existential threat," namely that "it involves a group with the capability to permanently change another group’s values and the way it governs itself against the latter’s will," Obama is essentially saying that as long as we continue to not alter our daily lives in response to terror and don't change our political views or our outlooks on law enforcement and terror prevention, there's no existential threat — even if people occasionally die, get maimed, or lose everything they have as a result of successful attacks.

In other words, the burden of preventing the arrival of an "existential threat" is on us. It's up to us not to change our lives even if the likelihood of harm becomes objectively intolerable. If the attacks occur often enough and do enough damage to alter the attitudes  of the American people, it would appear, according to Obama's "logic," that it would be our fault if IS were to turn into an "existential threat."

This is rubbish. The "successful" Brussels attacks and the existence of hundreds if not thousands of people on U.S. soil who wish to do us harm make the Islamic State an existential threat right now — and no amount of PC language can change that.

[5] — Here we go again. Islam is "a religion of peace." Wrong: "it is indisputable that the texts [of Islam] encourage violence and terror."

[6] — While Bostonians' response was noble, there's a limit. Would another similar attack in Boston change the average person's attitude towards going "out shopping"? The really outrageous aspect of all of this is, at bottom, that we're expected to put up with occasional terrorist attacks which take lives and change others forever. Further, it's almost our duty not to change how we conduct our lives no matter how many successful terror attacks occur. All of this is against human nature, and common sense.

In unexcerpted material, Obama claimed that in the U.S., "we have an extraordinarily successful, patriotic, integrated Muslim American community." Tell that to the victims of the "bloodbath" in Columbus, Ohio, to the 14 who died and dozens who were injured in San Bernardino, and to the victims of other Islam-inspired attacks in the U.S. during the past seven years. In most instances, we have learned that fellow Muslims up to and including Muslim clerics knew enough of the perpetrators' plans that they should have at least contacted law enforcement with their concerns. But they didn't.

Additionally, we've had outfits like CAIR insist that Islam has had nothing to do with any of this, even though the perpetrators have almost always cited Islam as their motivation. If that qualifies at "successful" and "patriotic," I don't want to see what "unsuccessful" and "unpatriotic" look like.