Conservative and center-right columnists often have to do far more digging than their liberal counterparts, simply because overwhelmingly left-leaning beat journalists, aka "Democrats with bylines," provide such unbalanced reporting on current events on a daily basis.

Fortunately, the Washington Post's Marc Thiessen did the entirely necessary work of rummaging through available information about federal court nominations in 1988 and 1992. Any beat reporter could have done the same thing, but either didn't, or decided not to report what was found. What Thiessen unearthed makes an argument-ending mockery of Vice President Joe Biden's claim, made in a Monday evening tweet, that when he was then Chairman of the Senate Judiciary Committee, he "urged the Senate and White House to work together":

On Monday, an enterprising individual poster at C-SPAN performed a very valuable public service. This poster went around the establishment press firewall and put up a June 25, 1992 video of Biden declaring that President George H.W. Bush should "not name a (Supreme Court) nominee until after the November election." As I noted in a Monday NewsBusters post, "There are still plenty of reporters around, perhaps some of them now serving as editors, who were on the beat a quarter-century ago and who should remember Biden's contentious statement." This is particularly the case at the New York Times and the Associated Press, which have consistently assigned specific reporters to cover matters affecting the Court.

On Tuesday I posted and cited a June 26, 1992 New York Times story by Neil A. Lewis showing that Biden went further in that Senate floor speech than the C-SPAN video indicated. Lewis reported, quoting from that post, that "Biden would not entertain any Republican Supreme Court nominee in any year at any time as long as he chaired the Judiciary Committee 'unless the President consults the Senate in advance.'"

That same post excerpted a June 1992 interview Biden had with E.J. Dionne at the Washington Post found by Ed Morrissey at Hot Air, wherein Biden essentially demanded an advance ideological litmus test (bolds are mine throughout this post):

The president, he said, should be prepared to compromise with the Senate not only on the identity of a nominee but also on the question of what judicial philosophy should be reflected on the court. “Unless the president is willing . . . to actually sit down with and compromise with the Senate beforehand, it is bound, guaranteed, that there will be a serious fight no matter who is sent,” Biden said. 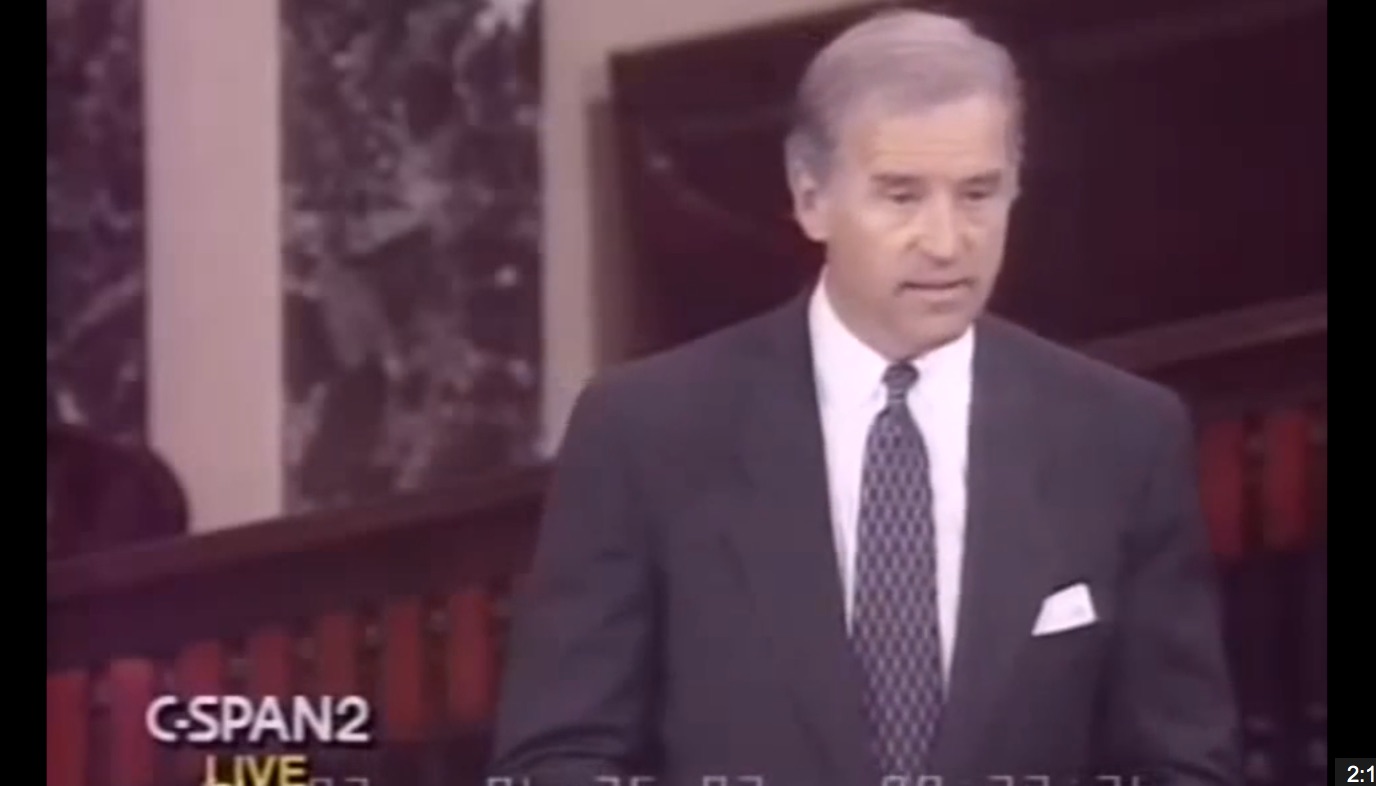 ... According to a report by the Congressional Research Service (CRS), in 1992 Biden killed the nominations of 32 Bush appointees to the federal bench without giving them so much as a hearing. And that does not count an additional 20 nominations for the federal bench where Biden did not hold hearings that year, which CRS excluded from its count because they reached the Senate “within approximately [four] months before it adjourned.”

So none were cases in which time simply ran out. There was plenty of time to consider the nominations. But Biden refused. Why? According to an article in Texas Lawyer magazine, cited in the CRS report, some of the “nominees reportedly fell victim to presidential election year politics, as Democrats hoped to preserve vacancies in expectation that their presidential candidate would win election.”

... That’s not all. In 1988, then-Chairman Biden also killed the nominations of nine candidates for the federal bench appointed by President Ronald Reagan without so much as a hearing. The New York Times reported at the time that “Democrats were determined to bury” some of the nominations because, as one liberal lobbyist told the paper, “the appellate seats were too precious to for us to give up” in a presidential election year.

... Both parties have a history of killing judicial nominations without a hearing in an election year, particularly in cases where the nomination would shift the balance of the court. The CRS report notes that in 1995 and 1996, when Republicans controlled the Senate, they killed 14 of President Bill Clinton’s nominees to the federal bench without a hearing.

While Thiessen's "both parties" point is valid, the fact is that wholesale "killing (of) judicial nominations without a hearing in an election year" is a practice begun by and practiced far more ruthlessly by Democrats than Republicans during the past three decades.

Many among the horde of journalists currently calling for preemptive surrender by GOP senators in this matter surely know this history. While they've certainly found it inconvenient that it's been exposed, it would seem that they really don't care all that much. They figure that if they help Harry Reid follow through on his promise to apply unrelenting pressure loudly enough and long enough, they'll intimidate the Senate majority into entertaining a Supreme Court nominee this year. Based on the history, and the absolute certainty that there will never be any reciprocity, such an effort is best seen as an attempt to impose the equivalent of mob rule.