Press Definition of 'Joke': Any Statement That Insults or Threatens a Republican or Conservative

Just as a reality check, I asked a friend today what his reaction would be if I said with a sincere-sounding voice that he makes me want to strangle him. He said, "Almost sounds like a threat." I said, "No, it was supposed to be a joke." He said, "No it's not."

I also asked another person what her reaction would be if I earnestly called her "demented." She said, "You'd be insulting me." I asked, "What if I said I was just joking?" Response: "I'd say, 'The heck you were.'" In the past ten days, members of the press have decided that threatening language and an insult, both directed at GOP presidential candidate Carly Fiorina, were only "jokes." There is virtually no chance that these same people would give the same treatment to threats and insults directed at Democrats and leftists.

The Thesaurus does not identify "insult" or "threat" as a synonym for "joke."

The women of The View now want us to believe that they were just "joking" when they characterized Fiorina's appearance as "demented" last week. A couple of them are alleged comediennes, though as far as I can recall the last time they said anything genuinely funny instead of deliberately hurtful was during the twentieth century.

As alleged comics, these women should know that a "joke" in their profession has a structure, i.e., a setup and punchlline. Neither was present when Michelle Collins told her fellow hostesses that Fiorina "looked demented!" at the GOP debate last week. What she said was simply a garden-variety, playground-mentality insult. The group's cowardly failure to acknowledge that obvious truth when they had Fiorina on their show earlier this week utterly lacked honesty or integrity. These same women would go apopleptic if a "comic" appearing on their show tried to get laughs by stating that "Hillary Clinton cackles like a chicken!"

Speaking of Mrs. Clinton, at a campaign event in New Hampshire on Tuesday, a person claiming to be a former Hewlett Packard employee told the Democratic presidential candidate that "Every time I see her (Fiorina) on TV, I want to reach through and strangle her."

At the Associated Press Tuesday afternoon, Ken Thomas characterized what the man said as a "joke."

Thomas and the AP also did their level best to minimize the incident's visibility. Thomas buried the following passage five paragraphs deep in a story whose headline and opening paragraphs were all about the candidate's plans to supposedly reform the scandal-plagued Veterans Administration:

A search at the wire service's main national site indicates that no other AP report has covered the incident. By contrast, the AP dedicated single-topic stories to former candidate Scott Walker's insistence that he could not definitively declare that President Barack Obama is a Christian, and to Donald Trump's "failure" to correct a man who, at a campaign rally, characterized Obama as a Muslim. This disparate treatment occurred despite the fact that, while the GOP candidates were noncommittal and did not address the comment, respectively, Mrs. Clinton clearly enjoyed what the man who would like to "strangle" Fiorina said.

Sadly, though what the man employed was threatening language with no humorous content, the Republican National Committee partially bought into the idea that there was "joke" hiding somewhere. It's some consolation that at least the RNC's official statement denouncing the incident made it clear that it was Mrs. Clinton who considered what the man said to be funny: 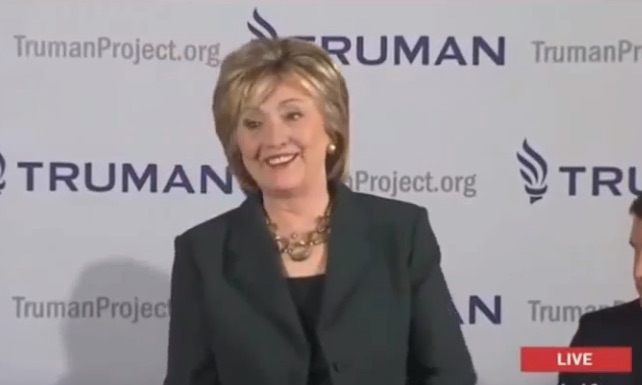 In response to Hillary Clinton laughing at a male audience member who said “Every time I see [Carly Fiorina] on TV, I want to reach through and strangle her,” Republican National Committee Press Secretary Allison Moore released the following statement:

“By laughing off a male questioner’s desire to strangle Carly Fiorina, Hillary Clinton and the Democrats have lost all credibility claiming to be a party that stands up for women. Jokes about committing acts of violence against women are always in poor taste and should be condemned every time.

“Hillary Clinton routinely exhibits the worst kind of hypocrisy on women’s issues, whether it’s launching attacks on equal pay despite paying women less than men in her Senate office or her foundation’s acceptance of millions of dollars from foreign governments that oppress women’s rights. It’s clear women just can’t count on Hillary Clinton to stand up for them. She should apologize immediately.”

The AP's Thomas appears to have taken Moore's statement as permission to characterize what clearly was not anything resembling a joke as a joke.

We can be quite certain that no one in the lapdog press will get close enough to Mrs. Clinton to ask her if she will apologize for her boorish behavior. We can be equally certain that boorish behavior by Democratic candidates, spokespersons and supporters will be similarly ignored or downplayed — as long as they insult or vaguely threaten Republicans or conservatives.