On June 30, the Washington Post announced that it would be "compiling a database of every fatal shooting in the United States by a police officer in the line of duty in 2015." The Post has been "tracking more than a dozen details about each killing — including the race of the deceased, the circumstances of the shooting, and whether the person was armed."

The paper's work thus far has been a revealing exercise which should be getting far more attention than it is. I believe would be getting the needed attention if the revelations were different. You see, the analysis of fatal shootings thus far shows that, in layman's terms, the overwhelming majority of them were wholly justified (HT to an Investor's Business Daily editorial).

Specifically, as summarized in the midst of an October 24 story by Amy Brittain recalling the heartbreaking March 24 death of Officer Trevor Casper in Fond du Lac, Wisconsin during his first solo day on the job:

... only a small number of the shootings — roughly 5 percent — occurred under the kind of circumstances that raise doubt and draw public outcry, according to an analysis by The Washington Post. The vast majority of individuals shot and killed by police officers were, like (Steven Timothy) Snyder (who fired on Casper first and who also died during the related gunfire exchange — Ed.), armed with guns and killed after attacking police officers or civilians or making other direct threats.

“We know that anecdotally, because typically that’s why police officers choose to use deadly force,” said Pasco, whose organization includes 335,000 officers nationwide. “These are circumstances where their lives or the lives of citizens around them are in imminent danger.”

In 74 percent of all fatal police shootings, the individuals had already fired shots, brandished a gun or attacked a person with a weapon or their bare hands, according to an analysis of actions immediately preceding the shootings, which draws on reports from law enforcement agencies and local media coverage. These 595 cases include fatal shootings that followed a wide range of violent crimes, including shootouts, stabbings, hostage situations, carjackings and assaults.

Another 16 percent of the shootings came after incidents that did not involve firearms or active attacks but featured other potentially dangerous threats. These shootings were most commonly of individuals who brandished knives and refused to drop them.

The 5 percent of cases that are often second-guessed include individuals who police said failed to follow their orders, made sudden movements or were accidentally shot. In another 4 percent of cases, The Post was unable to determine the circumstances of the shootings because of limited information or ongoing investigations.

The Post continues to update its database. As of this moment, it shows the following breakdowns of 827 fatal shootings by police:

Of the 770 instances where the race of the person killed by the police was known, 27.2 percent were black; this is more than double their representation in the U.S. population. 17.5 percent were Hispanic, which is roughly the same as their 16.4 percent representation. The statistics make a mockery of the Black Lives Matter group's attempt to explain this disproportionate representation away, namely that black "victims" are "just in the wrong place at the wrong time." They aren't.

The IBD editorial makes important points about those who are playing politics with police officers' lives — points which the Post, at least for now, appears reluctant to make:

The Washington Post has just conducted a massive survey of police shootings and found that — surprise, surprise! — virtually all of them are justified. Thanks. Now where do cops go to get back their reputations? 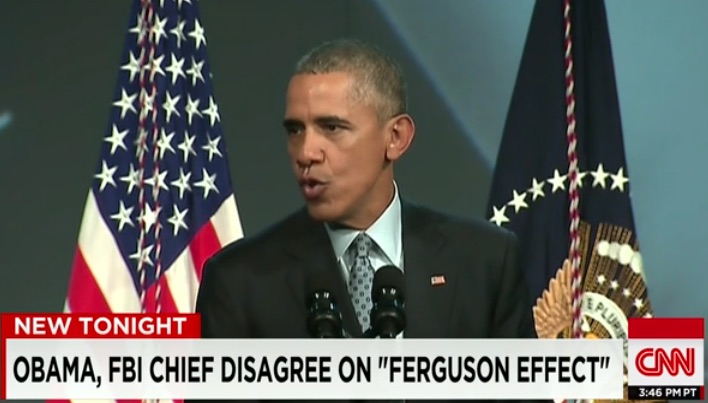 Certainly not the White House. It's claiming there's "no evidence" to support the FBI director's recent statements about a "Ferguson effect" hampering police work.

In fact, data show police morale and arrests are down in St. Louis, Baltimore, New York, Seattle and other cities where police are under siege, while crime is spiraling out of control.

... Seeing its war on cops and soft-on-crime approach backfiring with surging crime rates, the White House is trying to cover its tracks by dismissing the alarming trend. The president himself has taken to the podium to pooh-pooh the link between cop-bashing and the national crime wave.

Obama even called FBI chief James Comey to the White House for an unscheduled meeting Thursday. No doubt the purpose was to get Comey to couch the truth of what's become an embarrassing political situation for the president and a crisis for the public.

But the Post has undercut Obama's main excuse for federalizing the nation's 18,000 police departments through "criminal justice reform."

... (Thanks to the Post's data,) So much for the myth racist cops are shooting people for no reason. But the damage is done. Authority is breaking down in violent hot spots across the country as cops back off. Cries of "overpolicing" black urban areas has led to tragic underpolicing.

Baltimore residents complain of drug dealers walking down the street, openly firing guns in the air like the Wild West. The Los Angeles police chief says a resurgence in gang shootings has turned L.A. into Dodge City. In Charlotte, N.C., meanwhile, "people are just pulling out guns and shooting one another," the deputy police chief said.

In case readers are wondering whether IBD's "cherry-picking" quote is accurate, it is, and it is in proper context, as CNN reported last Tuesday:

President Barack Obama warned Tuesday against cherry picking data to advance theories on crime, saying a hard look at available evidence is required as the country's leaders grapple with incidents of violence.

The President's remarks came as the White House continued to push back against the idea that police are struggling to tame crime because they're worried about coming under greater scrutiny in the social media age.

"We do have to stick with the facts. What we can't do is cherry pick data or use anecdotal evidence to drive policy or to feed political agendas" ...

The Post isn't "cherry-picking." It's just that President Obama apparently has no interest in helping the nation's police officers get their reputations back.

The Post's finding should be thrown in the face of every Black Lives Matter activist and apologist who dares to characterize police as chronically at fault and trigger-happy. This would happen if the Post's findings were more widely known. It's quite reasonable to believe that the establishment press would cite the Post's data frequently — if it only contained the desired opposite findings.