A mini-war broke out yesterday between the Washington Post's Philip Bump, who would apparently prefer to keep discussions of Hillary Clinton's health off the table, and Matt Drudge. As would be expected, Drudge won in a rout, while Bump continues to pretend that he didn't.

Bump, in his disingenuous Friday morning entry at the Post's all too appropriately named "The Fix" blog, told readers that his own doctor's opinion concerning Mrs. Clinton's health should trump Drudge's. Bump should have known better — maybe he did, and didn't care, rolling the dice on Drudge ignoring him. The issue isn't Bump's doctor, who has never examined Mrs. Clinton, versus Drudge. It's Bump's doctor versus a media-published statement made by Mrs. Clinton's own doctor.

Here is some of Bump's bloviating:

Which doctor is smarter about Hillary Clinton: Matt Drudge or a doctor? 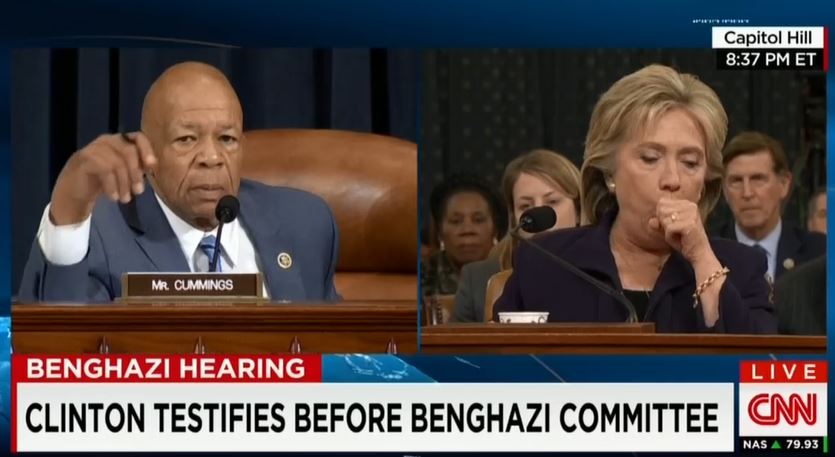 ... For Drudge, the biggest story (of the Benghazi hearing) was Hillary Clinton's health.

"Hillary health was biggest revelation at hearing," Drudge tweeted shortly after the hearing ended. "Coughing fit. Slow-speaking, obviously induced by meds. Choose not to believe if you must." (About 10 hours into the hearing, Clinton's testimony was briefly interrupted as she had to cough.)

He went on to issue his assessment of her illnesses.

Matt Drudge is not a doctor. So I called my doctor to see how seriously we -- and Clinton -- should take Drudge's diagnoses. Philip Weintraub is an internist and cardiologist who has been practicing medicine for 35 years, since Matt Drudge was 14.

"I think he has an active imagination," Weintraub said of Drudge. "I think he's probably Googled and seen that there may be some overtones to this in other people."

Let's start with the coughing fit. "It's strange if you can be interviewed for 11 hours and not have to clear your voice or rearrange the phlegm in the back of your throat," Weintraub said. Every time you speak, Weintraub said, you're pushing air past your vocal cords and out into the air, carrying with it moisture.

Here's one annoyance. The substance of the hearing, despite what everyone has been reporting, even outlets which should know better, was not 11 hours. It was slighly more than 8-1/2 hours, thanks to three breaks of roughly 45 minutes, one hour and ten minutes, and 25 minutes, respectively, plus the time allotted to the routine portion of House members' opening and closing remarks.

The slow speech? "If she was on medication," Weintraub said, "that would be the speed and the pace of the whole dialogue." When she was fatigued, she might show signs of muscle weakness in her voice, he added, but that her slow speech early on -- especially in her opening statement -- was likely a function of her having prepared comments that she delivered like a speech.

Then there's hypothyroidism. The thyroid, located in the neck, produces hormone to regulate metabolism. Hyperthyroidism produces too much of that hormone, and makes the body "hyperactive," in Weintraub's expression. Hypothyroidism is the opposite, which "might manifest itself as fatigue," Weintraub said. But Clinton's testimony itself suggests that it's unlikely.

"One would expect if they were hypothyroid there would be an inability to function under duress for an extended period of time because the level of octane in the bloodstream is low," Weintraub said. "The fact that she was able to withstand that intensity for 11 hours is probably a test to show that she has normal thyroid function."

Again, the actual elapsed time of the hearing was not 11 hours, and no amount of repetition will ever change that.

More to the point, Bump managed to get a doctor who has never examined Mrs. Clinton rendering and arguably unethical judgment that she has "normal" thyroid function.

Too bad for Bump and Weintraub that it's a matter of media record, published in the Associated Press, that Mrs. Clinton's "current medical conditions include hypothyroidism and seasonal pollen allergies," according to an internist who practices near Clinton's suburban New York home (and who clearly has seen Mrs. Clinton).

Too bod for Bump and Weintraub that having the hypothyroidism "condition" means that she doesn't have "normal" thyroid function.

Drudge linked to that AP report in his brief Friday afternoon rebuttal, headlined as follows at his home page: "WASH POST COVERS UP HILLARY HYPO."

He was being too kind. Bump's post was a "cleverly" concocted enterprise designed to get someone he knows, perhaps unwittingly, to lie. Weintraub should feel burned, because he has been.

(Update: On Twitter, Drudge points out that Clinton's doctor has said she does, in fact, suffer from hypothyroidism. To Weintraub's point, it didn't seem to affect her Thursday.)

Even then, Bump didn't identity that the report came from the AP.

Sorry, Phil. The only conceivably correct response in the circumstances was: "I was wrong. I am sorry." And you blew it.