NewsBusters Podcast: Kayleigh McEnany on How Republicans Take on the Media 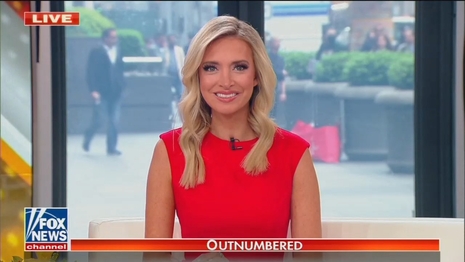 For the latest NewsBusters Podcast, we talked to Kayleigh McEnany -- former White House press secretary, current co-host of the Fox News show Outnumbered, and author of the book For Such a Time as This: My Faith Journey through the White House and Beyond.

The book has fun tidbits like this: At their first meeting, ABC reporter Jonathan Karl brought Kayleigh a copy of his book Front Row at the Trump Show. And they say Trump was a shameless self-promoter!

We discuss how Republican press secretaries face a hostile working environment, while Democrat press secretaries are looking at a room full of Democrats. Kayleigh said “When they talk to the press, it is a conversation with allies, with peers, with friends” and the White House Correspondents Dinner is pretty much the same, just with food added.

We talked about how Republicans could try to fight the relentless use of anonymous sources. Kayleigh said:

Every anonymous source has a motive. This is what the public needs to understand. They have a reason that they are leaking. And what I realized coming to DC, is that anonymous leaking is currency. That is your currency with a reporter, and I saw this time and time again, and you would always know or suspect ‘this person is a leaker, this person is a leaker.’ And then there would be a glowing profile of an individual, or something good that would come out in a paper, and you would just know that they are leaking to people.

When The Atlantic unleashed their story claiming President Trump had allegedly called the war dead "suckers" and "losers,"  the White House didn't get much warning. "They had a few anonymous sources, and I gathered more than two dozen sources with their names on the record saying this never happened, but the two dozen named sources meant nothing over the sources that wouldn’t give their name." She asked "Is this the way journalism should work?"