New York Times Oozes Over Pelosi, 'Liberated and Loving It,' A 'Washington Monument'

How much does The New York Times look like a partisan Democrat rag? Look no further than the yoooge 3,700-word Nancy Pelosi puff piece on the front of the Sunday Opinion section (and two entire pages inside) by Maureen Dowd. You could see the massive color photo on the outside, and a massive color photo on the inside, with Pelosi posed primly outside the "Speaker Nancy Pelosi Caucus Room."

The most preposterous sentence in the whole thing is Dowd claiming "She never won over pundits, as Tip O’Neill did, despite accomplishments to match his." Pundits especially loved her under Trump. The Time columnist enjoyed lunch with Pelosi at the hoity-toity Four Seasons Hotel, and Dowd touted her religiosity: 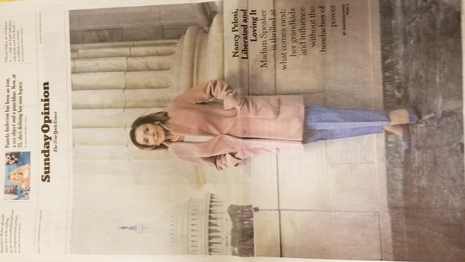 Fans dropped by our booth to thank Pelosi, and women in the restaurant gave me thumbs-ups, simply because I was sitting with her.

“I wonder, Maureen, girl to girl, I keep thinking I should feel a little more, I don’t know,” she hesitated, looking for the right word. Over the course of our conversation, she said the word was “regretful,” and she thought about it in church, and during morning and night prayers, but she just wasn’t feeling it. “It’s just the time, and that’s it. Upward and onward. I’m thrilled with the transition. I think it was beautiful.”

....The woman is, as her friend and fellow California lawmaker Anna Eshoo said, “satin and steel.” I tried to keep a straight face at Pelosi’s satiny solicitude. She did, after all, call the Jell-O-spined McCarthy “a moron” in 2021 after he criticized the Capitol physician’s mask mandate.

I dryly asked Pelosi, a devout Catholic, if she was praying for McCarthy, the way she once prayed for her nemesis Donald Trump.

“Yeah, I was, because I was praying for the House,” she said.

The most lavish tongue-bath came from her fellow California congresswoman:

Eshoo said Pelosi does not need to cling because her tenure was “jaw-dropping with a real sense of awe about the place and who came before us.” Her reputation, Eshoo said, “will stand the way the Washington Monument stands. They can’t chisel away at that.”

Not that there weren’t those who tried. For Republican candidates, Fox News and the right, she was a “Satan” to rally against, the epitome of Democratic evil.

That's the closest Dowd got to an opposing viewpoint. Most of it was lining up the tributes, like John Boehner's: 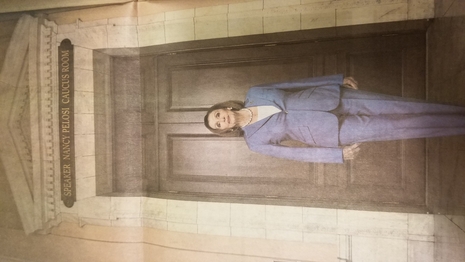 Even Pelosi’s old sparring partners have bowed before her mastery of politics. She was regarded by many on the Hill as an Armani dilettante when she arrived in Congress in 1987, an affluent San Francisco housewife with a frozen smile, a well-connected daughter of a former Baltimore congressman and mayor. But she is finishing up her career as “one tough son of a bitch,” as the former speaker John Boehner told me. He calls the first Madam Speaker the best speaker of the modern era; he even cried at her portrait unveiling at the Capitol last month.

In Washington terms, you would have to ask what favors Pelosi has granted to Boehner in his current lobbying capacities. Dowd recounted another recent lunch with female journalists, where one can imagine she had them all at Hello. Dowd concluded with a flourish: