A PBS NewsHour anchor claimed Republicans "made hay" out of the outrageous story that a ten-year-old child in Ohio sought an abortion in Indiana after being impregnated in a rape. But Democrats and liberal jerks like CNN's Dana Bash exploited it first, before it was fully confirmed. Republicans questioned its authenticity....until it was confirmed by prosecutors. 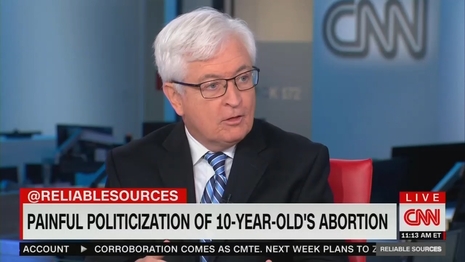 On CNN, Reliable Sources host Brian Stelter said he checked closed captioning, and in the last four days before his show, MSNBC talked about abortion three times as much as Fox, suggesting they were walking away from the child-rape story after a Fox host called it "fake."

CNN shamelessly suggested on screen that someone else engaged in a "painful politicization" of the child-rape story, when CNN's Bash was among the first to politicize it!

Finally, it's a weird time but the right time to defend Washington Post fact-checker Glenn Kessler for daring to underline that this story was only backed by a single source. In The Washington Post of Woodward and Bernstein days, they needed two sources to publish anything. But liberal hacks like Tommy Christopher at Mediaite thought Kessler needed to be kicked around for attempting to verify this story. Liberals think you shouldn't check the facts of liberals. That's giving the conservatives too much respectability!