CNN State of the Union host Dana Bash closed the show on Sunday by being Dana Gush, providing what looked like an advertisement for former Rep. Gabby Giffords and the gun-control lobby named for her. She interviewed Giffords and the group's leader Robin Lloyd and asked them absolutely nothing that a Second Amendment stalwart would ask.

BASH: And you're here in a sea of flowers representing people who did not survive.

GIFFORDS: I'm sad. Move ahead. Do not look back. I want to make the world a better place.

BASH: ... dedicated to stopping gun violence, the kind that almost took her life during a constituent event in 2011. Her mission is simple.

ROBIN LLOYD, MANAGING DIRECTOR, GIFFORDS: I think we have made a lot of progress.

LLOYD: And that's what Gabby has really spent a lot of her time doing the past nine or 10 years, of really trying to draw attention to the issue, use her voice where she can to enact change. And we have seen a lot of that happen.

Notice there's not a question in there? At one point, you can see Bash and Giffords holding hands.

Here was the oddest part, the one that ignored the actual history of Jared Lee Loughner, the disturbed man who shot Giffords and killed six others:

BASH (on camera): I interviewed you in 2013, just two years after gun violence almost took your life.

BASH (on tape): If you were to name the one -- number one thing that Congress could do to prevent the kind of violence that you were the victim of, what would it be?

GIFFORDS (after a pause): Background checks.

Loughner passed a background check. Other mass shooters have passed background checks, including the shooters in Buffalo and Uvalde. CNN didn't note her husband Mark Kelly is now a Democratic U.S. Senator.

Here's some other puffball questions: 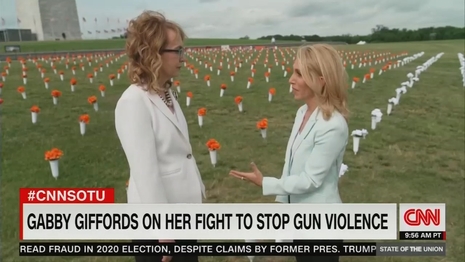 BASH: Are you still a gun owner?

BASH: You still think people should have guns, just do it safely?

BASH: You're living every day to the fullest?

BASH: For you, being an advocate against gun violence, that's living every day to the fullest?

It's understandable that Bash wouldn't throw hardballs at Giffords, but her handler Robin Lloyd was sitting right there.

Instead of asking questions, Bash let Lloyd talk about all the symbolism of gun violence placed behind them on the Washington Mall: "we have the 40,000 white roses behind us to represent the 40,000 Americans that died from gun violence last year, and now the new 5,000 orange roses to represent the increase in just one year of how many gun deaths we have had in this country." Then Giffords said "Too much guns. No more. No more. No more."

PS: Bash also allowed liberal propaganda at the top of her show on Sunday.

This badly disguised advertising was brought to you in part by Amazon Prime.