On Friday's Morning Joe, Jonathan Lemire touted a new poll by The Wall Street Journal and the National Opinion Research Center at the University of Chicago showed "support for abortion access has climbed drastically" when people asked if they support abortion for any reason. The pollsters found 57 percent support abortion on demand, up 15 points from a similar question in 2012.

On the bottom of the screen were the words "SUPPORT FOR LEGAL ABORTION AT HIGHEST POINT EVER," as Lemire suggested Republicans were drastically out of touch with the public. But this result is out line with many other polls, which find most people support at least some limits on the deadly procedure.

LEMIRE: Inflation seems top of mind for many voters heading into November, but Republicans seem dramatically out of step on a couple of key issues, including gun rights and abortion. New polling shows the recently leaked supreme court draft opinion on Roe V. Wade has solidified American support for legal abortion access. The latest poll from The Wall Street Journal and NORC at the university of Chicago shows support has remained steady over the past 20 years in cases where the woman's health is seriously endangered or if there's a strong chance of serious birth defects. But in other categories, support for abortion access has climbed drastically, compared to polls taken before that draft opinion was leaked. 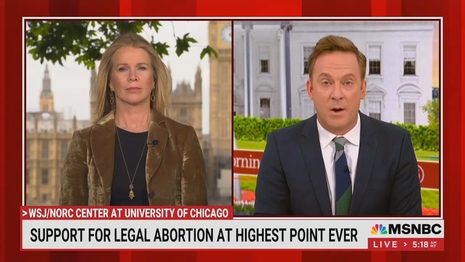 Lemire summarized "There's a loud minority in the Republican Party on those two issues," guns and abortions. "But they seem dramatically out of step from where the rest of the country is."

Or is this poll out of step with other polls? The latest PBS/NPR/Marist poll found only 24% of Americans think an abortion should be available at any point during pregnancy, and 9% believe abortion should never be permitted under any circumstance. In contrast, nearly seven in ten (68%) support some type of restrictions on abortion. This poll found even 52% of Democrats think limits should be put on abortion.

On the May 19 PBS NewsHour, reporter Lisa Desjardins put it this way: "In general, about a quarter of Americans believe it should be allowed always, in every part of pregnancy, leave it up to the woman, the family involved. About another third or so say somewhere between three or six months is where there should be a limit, a ban. Another third says they are for specific exceptions only." PBS still touted support for Roe (which is often misunderstood as putting limits on abortion): "Most Americans support Roe v. Wade but many want some abortion restrictions, poll shows."

A poll last year by AP and this same National Opinion Research Center found 80% of Americans said that abortion should usually be illegal in the third trimester and 65% said it should be during the second trimester.

MSNBC pushing polls that please abortion advocates was brought to you in part by Liberty Mutual.