At the top of the NPR home page on Saturday morning was a fact-check piece of sorts by NPR senior political editor Domenico Montanaro headlined "GOP playbook on abortion is to push Democrats on restrictions and contort their words."

Montanaro tried to argue that attempts by Fox News to reveal the Democrats are for an unlimited "woman's right to choose" were somehow misleading -- because their answers were mealy-mouthed!

NPR surprisingly used a video tweet by our Curtis Houck:

Ohio Democratic senatorial candidate Tim Ryan tells Fox's @BretBaier that there shouldn't be a limit on how late in a pregnancy that a woman could kill her baby #OHSen pic.twitter.com/RDEcPXFcQJ

BRET BAIER: As senator, would you have any limits on abortion?

RYAN: [Blathers about Roe being "conservative," the "extreme" is banning abortion after rape and incest]

BAIER: My question was about any limits to abortion at any point, you know, late term, anything?

BAIER: So no, is the answer.

RYAN: ...you and I– well, you and I sitting here can't account for all of the different scenarios that a woman, dealing with all the complexities of a pregnancy are going through. How can you and I figure that out? 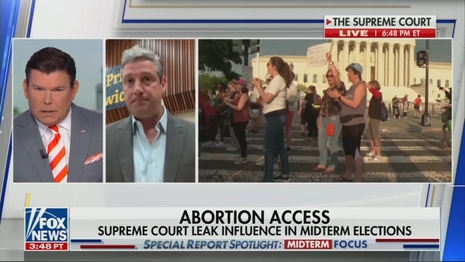 Montanaro tried to argue Ryan "wasn't comfortable — with two men on television talking about the subject — laying out what those [exceptions] might be."

Ryan was dodging the idea he opposed all limits, but "you've got to leave it up to the woman" sounds a lot like "abortion on demand."

But Montanaro claimed conservative media "distorted" the comments, as in these headlines from Clay & Buck and the Epoch Times:

Then Montanaro turned to Fox's Peter Doocy pressing Jen Psaki and getting the usual "pscolding" from Psaki:

DOOCY: The President's position on choice has evolved over time, so just checking for his official position. Does he support any limits on abortion right now?

PSAKI: Peter, the President has spoken — has talked about his position many times. He supports the right of a woman to make choices about her own body with her doctor.

DOOCY: But I know that one of the Democrats that he endorsed and — who won their primary this week, Tim Ryan, said yesterday that he does not support any limits on abortion. Is that where the President's thinking is now?

PSAKI: The President has stated his view many times.

DOOCY: So does the President support abortion up until the moment of birth?

PSAKI: The President has spoken about this many times, Peter. And I would refer you to his own comments about abortion and a woman's right to choose and make decisions about her body with her doctor, which is what any of those women would do.

Once again, it's "a woman's right to choose" -- at any point when she chooses -- and the NPR politico claims it was misleading for the Republican National Committee to summarize Psaki's answer as "No" to "does he support any limits"? He fussed "Clearly, that's not what was said."

We believe unequivocally, like the majority of Americans, that every woman should be able to access high-quality reproductive health care services, including safe and legal abortion... Democrats oppose and will fight to overturn federal and state laws that create barriers to reproductive health and rights.

The man who's "contorting" words here is the NPR guy. As a journalist, he doesn't like Fox underlining the Democrats back abortion on demand.