The New York Times has been alarmed by the existence of the Fox News Channel since it debuted in 1996. It developed a special fear and loathing of Bill O’Reilly when he hosted the top show in cable news, and now the paper is at it again, attacking Tucker Carlson. 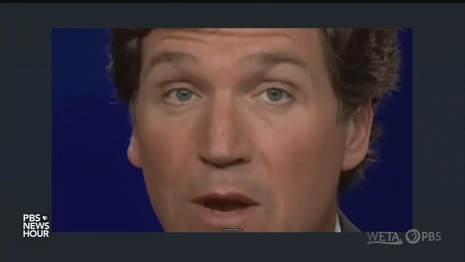 On Sunday and Monday, the Times published almost 20,000 words of “investigative reporting” on the Tucker show, announcing they'd watched 1,150 episodes and chronicled all the guests and the messages and the monologues. This should be defined as “opposition research.”

The overwrought thesis of Times reporter Nicholas Confessore – who is an MSNBC political analyst, no conflict there! – is Carlson dominates in the ratings because he’s “weaponizing fears and grievances” on “what may be the most racist show in the history of cable news.”

There are obvious reasons why this massive term paper sounds laughable to half of America. There’s Confessore going on the Joy Reid show on May 2 to complain about “weaponizing fears and grievances,” like Joy Reid could never, ever be accused of such a thing.

The Times reporter also appeared on Nicolle Wallace’s Deadline White House show. Nicolle announced “I’m shocked at how committed to polarizing the country at every heated moment he is.” MSNBC never polarizes the country?

Confessore proclaimed “on Tucker's show, everything is terrible. They’re out to get you because they hate you. They want to destroy you. Those are his words...It’s you/they, you/they every night. The repetition is part of the technique.”

Does anyone with a TV think MSNBC doesn’t use this formula? Let’s consider a few un-favorites from 2021. On Nicolle’s show, professor Jason Johnson denounced Republicans: “They don’t care who they have to sacrifice — whether that’s people in central Texas having to die over COVID or police officers in the Capitol — they don’t care who dies. They don’t care if it’s kids in Sandy Hook.”

On Reid’s show, professor Michael Eric Dyson claimed “These are the kind of people who would pass a law to keep Jesus from getting a cup of water while he’s dying on the cross.” Reid replied “Sad but true.”

But MSNBC is appalled by divisive talk shows. The New York Times is against “stoking fear” on cable news.

The charts in this “investigative” report were unintentionally hilarious. Tucker’s show is an “echo chamber,” as the number of opposing guests has declined dramatically in the last two years. How many “guests who disagreed with Joy Reid” does she welcome? Nicolle Wallace? Rachel Maddow? Even their “Republican” guests nod along in the echo chamber.

It’s also funny that the Times is shocked that Tucker’s “monologues have grown longer,” now typically lasting more than 10 minutes, with one June 2020 show featuring a 26-minute monologue. Have these people ever watched Maddow’s show?

The Times loves MSNBC. Back in 2018, they published a puff piece titled “How Joy Reid of MSNBC Became a Heroine of the Resistance.” In 2019, the Times published a valentine headlined “This Is the Moment Rachel Maddow Has Been Waiting For.” They touted people hosting a “Maddow-themed birthday party.”

So you may laugh heartily when Nicolle Wallace said Confessore’s massive takedown attempt is “an objective analysis of every show” Tucker’s done.