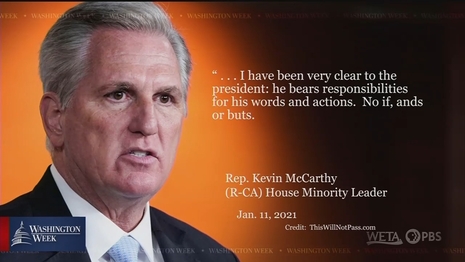 Welcome to Groundhog Day, where the media want every day to be January 6. Their hot scoop at the end of last week was House GOP leader Kevin McCarthy speaking angrily of Donald Trump's role in encouraging the riot on Capitol Hill, and how he planned to ask the president to resign. McCarthy's office put out a flat denial...and then they produced audio tapes that showed that was false.

By contrast, three years ago, the paper was feeding bon-bon questions to Democrat leader Nancy Pelosi in a Washington Post Magazine cover story on "Pelosi's Moment."

Enjoy the podcast below, or wherever you listen to podcasts. On our next show on Wednesday, Curtis Houck and I will be interviewing former White House press secretary Kayleigh McEnany about the media's double standards in the briefing room.