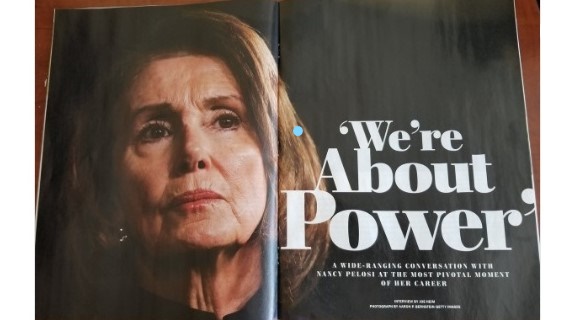 Joe Heim has performed a few softball interviews for liberals over the years at The Washington Post Magazine. Sunday's cakewalk for Speaker Nancy Pelosi was a thing to behold. At least the title was accurate: 'We're About Power."

A few soft opening questions can get the subject to open up. But almost everything was easy. It began with questions like this:

After eight years as minority leader, what does it mean for you to be back in this office?

Is this the most divisive political climate in your 32 years in Congress?

Is this the most critical 20 months of your entire career?

How would you describe your relationship with the president?

Do you feel that he has done anything that has been good for America?

On that one, Pelosi said "He's been a great organizer for Democrats, a great fundraiser for Democrats and a great mobilizer at the grass-roots level for Democrats. [Laughs.] And I think that's good for America."

The most sickening softball was on the female freshman Democrats she posed with for a different magazine:

So you're on the cover of Rolling Stone with Rep. Jahana Hayes, Rep. Alexandria Ocasio-Cortez and Rep. Ilhan Omar. Do you see in this new generation of women lawmakers, not just them, but this generation, do you see yourself in them, or do you not see much of yourself in them at all?

...I say this to them: I was you. I used to carry the [protest] signs pushing strollers.... And as an advocate, relentless, persistent, dissatisfied always. But when you cross over the threshold and come to Congress, you can bring those enthusiasms, those priorities, your knowledge, your vision, your plan. But you have to want to get results. You have to get results.

Heim also asked this groaner: "It's Ash Wednesday, and you're a practicing Catholic. How does your faith guide you in this office?" Pelosi boasted:

"I was born into a family that was devoutly Catholic, fiercely patriotic, proud of our Italian American heritage and staunchly Democrat. And we saw that connection between church and Democrats as the Gospel of Matthew. When I was hungry, when I was thirsty, when I was naked, when I was homeless, when I was in prison. And that was how we were raised, that we had a responsibility to other people. And that was our motivation. So that's why sometimes it's hard for me to understand -- I have to admit this, that we were raised to say there's a spark of divinity in every person. That we're all God's children. And yet I see people of faith go down paths that so contradict what they say. For example, on the issue of immigration, so many people of faith, I guess they just don't think that there's a spark of divinity or that we're all God's children. How disrespectful they are." 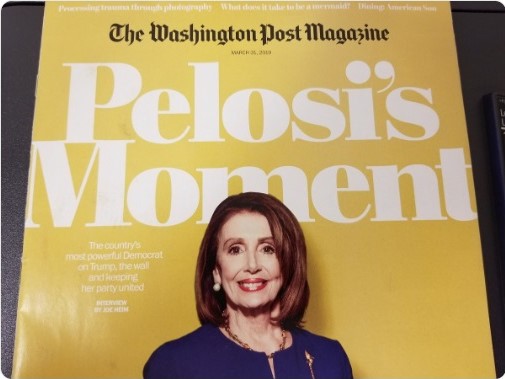 Heim didn't ask "devoutly Catholic" Pelosi something challenging like her opinion on how the church handled abusive (liberal) former Cardinal McCarrick. Nothing to make Nancy sweat.

There were some questions about controversy within the Democrat caucus, about impeachment, and democracy dying:  "A lot of Americans are really anxious about where the country is right now, and some of them feel the nation's institutions are in a perilous state. Do you share that concern?"

You said earlier you don't feel it's worth it to pursue impeachment. Do you believe he's fit to be president? Are we talking ethically? Intellectually? Politically? What are we talking here?

All of the above. No. No. I Don't think he is. I mean, ethically unfit. Intellectually unfit. Curiosity-wise unfit. No, I don't think he's fit to be president of the United States.

This is where you point and laugh when the top editor at the Post says they're job is to hold powerful people accountable. Instead, they just want to hold her, and rock her gently.