Column: Allergic to the 'So-Called Freedom Convoy' in Canada

Something caught my ear in the car, listening to a radio simulcast of the February 21 PBS NewsHour. Anchor Judy Woodruff drily reported that “Canadian police have arrested more than 190 protesters and issued 389 charges in connection with the so-called Freedom Convoy.”

The “so-called Freedom Convoy.” It’s a journalistic term that can be employed as distancing themselves from something that’s not true. After 9/11, we heard about the “so-called War on Terror.” Democrats hated that term. Dan Rather used to get out the ten-foot pole and report on “the Republican political lobbying group that calls itself, quote, the ‘Christian Coalition.’” This could be described as “so-called journalism.”

So I decided to put this term “so-called Freedom Convoy” into the Nexis news database to see how often it cropped up on television. The answer was quite a lot. It began as soon as the protests began on January 29. 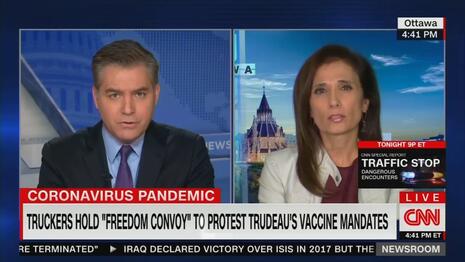 CNN’s Jim Acosta was barking: “Canadian officials say they were sickened to see protesters dancing on that country's Tomb of the Unknown Soldier. This all began as the so-called Freedom Convoy of truckers who drove across the country for several days before arriving in Ottawa yesterday.”

If Jim Acosta thinks it’s a disreputable protest, then it’s probably about “freedom.” This is the same operative who fought with White House press secretary Kayleigh McEnany in June of 2020, suggesting Trump rallies were COVID super-spreaders. When she suggested the media were incoherent, that they didn’t feel Black Lives Matter protests were unhealthy, he lamely shot back: “But these are protesters protesting against injustice, against racism and police brutality. This is a rally, a political rally.”

Liberal protests are for justice, so they weren’t super-spreaders. It’s “science.”

It turns out that CNN hated the Canadian protests so much that I found the term “so-called Freedom Convoy” used in 62 different hours of CNN coverage. There were 12 of them on February 12 alone, in half the hours of that day.

Let’s stipulate that CNN offers pretty much its entire day of transcripts for the database, and plenty of these were in the overnight hours, when the news is more international.

Every other liberal network used this term, too, but much less. MSNBC only used it four times in the Nexis sample (but they put fewer hours into the system). ABC used it on six programs, CBS on five, NBC on four, and PBS only two.

On MSNBC’s Deadline White House, substitute host Alicia Menendez warned “the so-called Freedom Convoy, crippling the U.S. and Canadian economy raising security alarms about copycat protests. So why is the U.S. right wing cheering them on?”

Now try to imagine the sometimes violent rioting and looting in the summer of 2020, which the networks described with positive terms, like “racial reckoning.” Would anyone ever refer to “so-called Black Lives Matter protests”?

I searched CNN in the summer of 2020 for “so-called Black Lives Matter,” and there was one record. It was live coverage of the 2020 Republican convention on Wednesday night, August 26. It wasn’t an interview, just an open mic. Jack Brewer of Black Voices for Trump was saying the media “ignore the so-called Black Lives Matter organization that openly, on their website, called for the destruction of the nuclear family.”

On this protest story, CNN sounded a bit like White Voices for Trudeau.