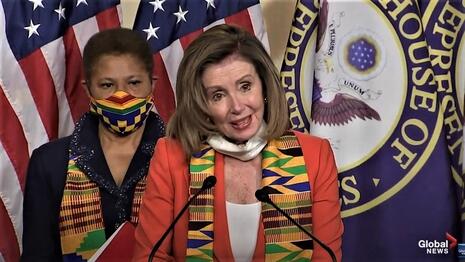 Two months ago, New York Times reporter Maggie Astor warned that those dastardly Republicans were much more likely to send around "misinformation" in their political emails than the Democrats. After subscribing to emails from 390 Members of Congress, their little study concluded "Republicans included misinformation far more often: in about 15 percent of their messages, compared with about 2 percent for Democrats."

On Monday, I received the latest fundraising pitch from Nancy Pelosi's Pact to the Future PAC, headlined "MSNBC (SHOCKING announcement)." According to Nancy's team, the Republicans are aiming to end our democracy in the midterms, and we'll never see it again?

This is the most important email I have ever sent you, Tim.

-- I watched Republicans launch 400+ voter suppression bills nationwide to keep Democrats from ever winning another election.

-- Now, MSNBC just warned that if we lose our democracy in this election, we are unlikely to get it back during our lifetimes.

I cannot overstate the severity of this situation:

If we want any chance of saving our democracy, saving our Majorities, and STOPPING Republicans from barging back into power for the rest of our lives, I’m going to need every single Democrat to step up and do their part in this historic election.

Hear me loud and clear, Tim:

We CANNOT allow Republicans to silence our voters to sabotage this election.

So which MSNBC star has "just warned" that if we lose our democracy in 2022, we'll never get it back? A quick Google of this phrase turns up MSNBC historian Michael Beschloss on Jonathan Capehart's show on January 2, more than a month ago. So the term "just warned" isn't exactly accurate (maybe this pitch is a rerun). This is the same episode where Capehart nearly cried over our imperiled democracy.

Nancy Pelosi's PAC is raising money by hitting the Michael Beschloss Panic Button from MSNBC a month ago: “If we lose our democracy this year, we are unlikely to get it back during our lifetimes." pic.twitter.com/vcE2W6zlvq

Unsurprisingly, Joy Reid re-ran that Beschloss hyperbole on her show on January 6.

"Fact checkers" like Maggie Astor don't see any "misinformation" in casting the Republicans as tyrants overthrowing democracy. They make it safe for Pelosi to say "I cannot overstate the severity of this situation," because she fears no "independent fact-checker" in the liberal media.

There's not a trace of irony in Pelosi closing this partisan message urging Democrats to "show Republicans we will NEVER let them hold the reins in Congress again."

PS: This email is also fraudulent in suggesting my "membership" on Team Nancy has "expired," as if I ever belonged to that. It's much like the Trump emails I get that say "I learned that your 2022 FOUNDING MEMBERSHIP is INACTIVE." 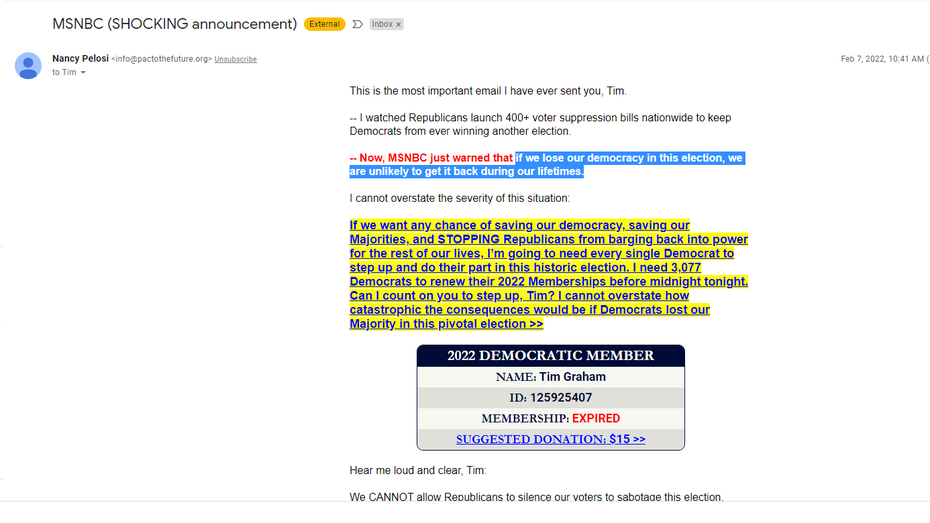