'I'm Trying To Hold It Together': MSNBC Host Gets Verklempt Over Threat to Democracy 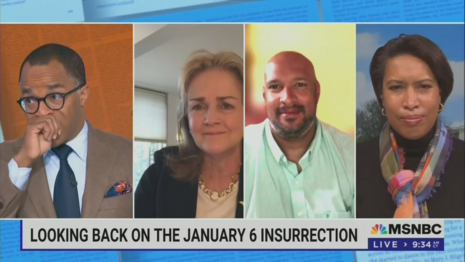 That's not Jonathan Capehart having a cold/flu/COVID moment in the screencap. It's the MSNBC host, who's also a Washington Post editorial board member, getting verklempt on his show this morning as he agonized over the alleged threat to American democracy posed by Donald Trump and his supporters.

During a segment on the coming anniversary of the January 6th Capitol riot, Capehart got choked up, saying. "I'm trying to hold it together right now." His guests were Democrat Congresswoman Madeleine Dean, Capitol Hill police officer Harry Dunn, and DC Mayor Muriel Bowser. After the congresswoman waxed alarmist about the alleged threat to our democracy, an emotional Capehart ended the segment saying:

MADELEINE DEAN: I am fearful that if we don't get to the bottom of it, if we don't get to the truth, we are at risk for having this happen again. If we don't lift up the truth and put down the lies, our democracy is at stake. And that is not an overstatement. I would not have thought that 15 years ago. But now I recognize the precious, fragile nature of this experiment in democracy. And if we don't do our part to uphold it, to point out the truth, to call out the lies, we could see this happen again. Sadly I am worried for my children and my grandchildren.

JONATHAN CAPEHART: Um, [pause, voice choked with emotion] I'm trying to hold it together right now, because this conversation --

HARRY DUNN: [Trying to comfort Capehart] That's all, that's all, I think that's all of us, all of America is trying to hold it together now, so.

CAPEHART: I mean, Officer Dunn, your answer to my question just broke me, because it just speaks to the professionalism, that you can still put on that uniform and protect people who take your life for granted. I cannot thank you enough for your service.

CAPEHART: Mayor Bowser, we have known each other a long time. And your leadership during that time, and continued, is remarkable and spectacular.

And Congresswoman Dean, you have been a voice of clarity through all of this. I hope that the fear that you express, and that I share, ends up being unwarranted. What makes me so upset is, I don't think it is.

PS: Capehart also wore the fright wig on Friday's PBS NewsHour, proclaiming that Congress needs to shred the filibuster to pass Democrat "voting rights" bills. Otherwise, "any of those consequences that could come from doing away with the filibuster will pale in comparison. That's how — that's how dire I think the situation is. And call me alarmist, but I'd rather be alarmist than complacent."

MSNBC host Jonathan Capehart getting choked up was sponsored in part by Tide, Hyundai, and Noom.