'Paging Dan Quayle'! Kamala Complains Her News Treatment Is the Worst of All Veeps 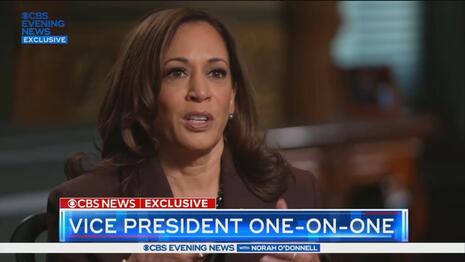 Ms. Harris has privately told her allies that the news coverage of her would be different if she were any of her 48 predecessors, whom she has described as all white and male. (Charles Curtis, who served as vice president under Hoover, spoke proudly of his Native American ancestry.) She also has confided in them about the difficulties she is facing with the intractable issues in her portfolio, such as voting rights and the root causes of migration.

Journalists can always find a feminist to cry anti-woman bias. In this story, that includes Hillary Clinton:

“There is a double standard; it’s sadly alive and well,” Mrs. Clinton said in an interview. “A lot of what is being used to judge her, just like it was to judge me, or the women who ran in 2020, or everybody else, is really colored by that.”

At least the Times balanced out the sexist-bias hot takes with a fellow Democrat's take on how she's arrogant on the border issue:

Representative Henry Cuellar, a moderate from Texas and one of the more prominent voices on border issues in the Democratic Party, said his experiences with Ms. Harris’s team had been disappointing. When Mr. Cuellar heard Ms. Harris was traveling to the border in June, he had his staff call her office to offer help and advice for her visit. He never received a call back.

“I say this very respectfully to her: I moved on,” Mr. Cuellar said. “She was tasked with that job, it doesn’t look like she’s very interested in this, so we are going to move on to other folks that work on this issue.”

In the future, Mr. Cuellar said he would go straight to the West Wing with his concerns on migration rather than the vice president’s office.

Of the White House, Mr. Cuellar said, “at least they talk to you.”