Column: 'No-Win' Kamala Still Has Fans in the Press 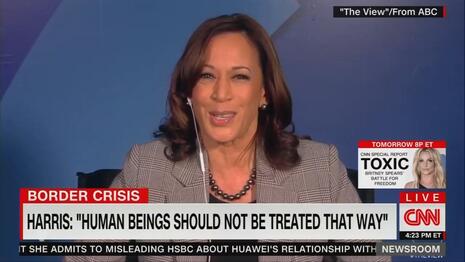 They say when life gives you lemons, you make lemonade. When it comes to Vice President Kamala Harris, she can count on energetic admirers in the press who take on the task of making lemonade out of her lemons.

Handed a pile of no-win issues, Harris builds a network

Gains credit with liberals focused on migration, abortion, and the vote

One would think that being handed “volatile social issues” like illegal immigration, abortion and voting rights might be very damaging for Harris. But no! Wootson touted that “behind the scenes, Harris has been quietly seizing the opportunity to build a liberal national network of dedicated activists that is convinced she embraces its causes.”

Wootson found delighted leftists who appreciate the allyship of Kamala. "Advocates invited to the White House, or to Harris’s ceremonial office in the adjacent Eisenhower Executive Office Building, often express appreciation that their opinions and standing are being amplified by a political star.”

Is this reporting? Or merely advertising? Cuddly Cleve has a way with sweet talk.

The story began with Harris meeting with abortionist Amy Hagstrom Miller, founder of “Whole Women’s Health” in Austin,Texas. Miller said she appreciated how Harris would “talk straight to the extreme politicians in this country,” and she meant Texas Gov. Greg Abbott.

That’s fascinating. The House of Representatives just passed a bill called the “Women’s Health Protection Act” with 218 of 219 Democrats that is so extreme on untrammeled abortion that it would require states to allow abortions of an unborn baby viable outside the womb if one physician can proclaim that an abortion would protect the woman’s health. An army of Ralph Northams could make post-birth abortions happen across America.

But sure, tag the pro-life Republicans as the “extreme politicians in this country.”

Liberal extremism is no vice in the pursuit of the presidency. Wootson added “If Harris has a path to the presidency, it is likely to run through an energized liberal base — not, as it did for Biden, through blocs of centrist Democrats and moderate Republicans.” Political scientist Matthew Wilson argued that Harris doesn’t need to be broadly popular to win the presidency, but can triumph as the “champion of a base cause.”

The Post story noted Harris was “dogged” by Republicans on the issue of “irregular migration.” She was hounded as the “border czar” who wouldn’t go to the border. But when she (sort of) went there in June, to El Paso, it was a triumph with her base.

Fernando Garcia of the left-wing Border Network for Human Rights, a group bearing hashtags like “Hugs, Not Walls,”  told Wootson “I made remarks in regard to not forgetting our history. This border, the U.S.-Mexico border, is the new Ellis Island. And then she went over and had a press conference at the hangar, she said the same thing.” 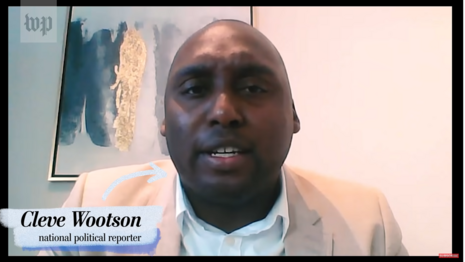 Wootson concluded the story by telling readers that an audience with Harris gives activists the proverbial “seat at the table,” and then they will feel they are heard and this will make them more open to “bring about a Harris administration,” whenever Biden isn’t going to be president any more.

Kamala Harris is not exactly holding a pile of press conferences, so almost no one can name her press secretary. But keep an eye out for Cleve Wootson. He’s making a good case for himself.