Sometimes the most outrageous bias today emerges in promotional tweets. The New York Times had a long takedown on Sunday's front page about how the Israelis successfully assassinated Mohsen Fakhrizadeh, Iran's top scientist developing nuclear weapons to attack Israel, by mounting a robot with a machine gun on a pickup truck. But they made the Ayatollah's top bomb-maker into a very civilized sort:

He loved the simple pleasures of life: poetry, romantic walks on the beach and building WMDs to kill millions of Jews.

The @nytimes on the Iranian scientist tasked with building the bomb to wipe Israel off the map. You can't make it up... https://t.co/s9d7S6ZM7c

Schwammenthal of the American Jewish Committee imagined the Times doing this for the actual Nazis:

OK, people, let's do this. I begin with the easiest one: "Despite his prominent position, Germany's leader wanted to live a normal life. He loved painting peaceful landscapes, taking his wife and German shephards [sic] to the Bavarian Alps and eating vegetarian food."

The much longer article by Ronen Bergman and Farnaz Fassihi wasn't quite as sickening. It began: 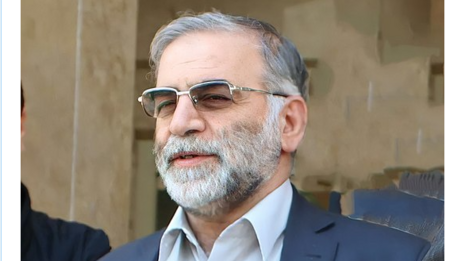 Iran’s top nuclear scientist woke up an hour before dawn, as he did most days, to study Islamic philosophy before his day began.

That afternoon, he and his wife would leave their vacation home on the Caspian Sea and drive to their country house in Absard, a bucolic town east of Tehran, where they planned to spend the weekend….

Despite his prominent position in Iran’s military establishment, Mr. Fakhrizadeh wanted to live a normal life. He craved small domestic pleasures: reading Persian poetry, taking his family to the seashore, going for drives in the countryside.

They also noted Fakhrizadeh may have been lax about security protocols because he liked the idea of being a martyr for Allah. It's quite clear that he was a passionate soldier in Iran's Revolutionary Guard, designated by the U.S. government as a terrorist organization:

Mohsen Fakhrizadeh grew up in a conservative family in the holy city of Qom, the theological heart of Shia Islam. He was 18 when the Islamic revolution toppled Iran’s monarchy, a historical reckoning that fired his imagination.

He set out to achieve two dreams: to become a nuclear scientist and to take part in the military wing of the new government. As a symbol of his devotion to the revolution, he wore a silver ring with a large, oval red agate, the same type worn by Iran’s supreme leader, Ayatollah Ali Khamenei, and by General [Qasem] Suleimani.

He joined the Revolutionary Guards and climbed the ranks to general.

This is another example of how The New York Times is often much calmer and more neutral in covering Iranian terrorists than they are in covering American conservatives, like, for example, Larry Elder.