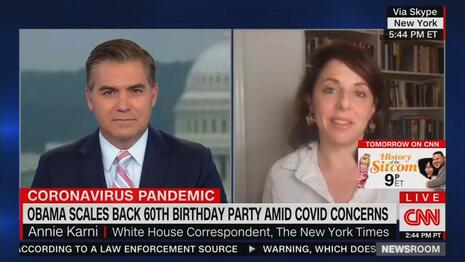 The New York Times is raging at Fox News over an interview their reporter Annie Karni gave to CNN's Jim Acosta on Saturday night. Karni summarized the Obama view at the end of the segment that Team Obama (or Democrats in general) felt Obama's hundreds of birthday well-wishers were a "sophisticated, vaccinated crowd." In other words, only Trump fans are "super spreaders" when they gather in large numbers.

Colby Hall at Mediaite promoted the complaint of missing context. On America's Newsroom, Fox anchor Bill Hemmer ran a short clip and then read a Glenn Greenwald tweet: “New York Times reporter justifying the maskless birthday bash because he only invited a sophisticated vaccinated crowd is about as emblematic of liberal discourse as it gets.”

NYT spox on Fox dishonestly attacking @anniekarni: “This is yet another clear example of a bad-faith attack on a journalist. Our reporter's comments were taken out of context. While Fox didn't start the harassment campaign against our reporter, they willfully amplified it.”

The lamest part of this is routinely insisting that conservative media amplify "harassment campaigns." Do they spend any time on Twitter looking at how the New York Times amplifies leftist harassment? They won't accept any guilt by association, but they throw it willy-nilly.

Let's stipulate that Karni is summarizing the Obama viewpoint....without expressing any objection to it. If Karni was summarizing the Trump viewpoint without objection, we can guess liberals would feel she sounded like a Trumper. In the Biden era (as in the Obama era), liberal journalists spend a lot of time on television merely explaining (and not really analyzing) the Democrat point of view. They sound like a squad of Psakis.

News networks take 30-second comments and whittle them down to nine-second nuggets on an hourly basis, so this is not unique. The New York Times amplified tiny snippets of Trump. Take how they tried to turn an unrecorded "s--thole countries" comment into an international incident.

Here's how Jim Acosta typically let the Obama spin flow easily on CNN. If they think Karni's quote isn't the obvious takeaway, then they're not really acting like journalists.

Jim Acosta, 5:42 pm: See Jim be objective about Obama's birthday bash. Ask bland questions like "What safety precautions are they taking?" What do the locals say? NYT's Annie Karni throws Obama talking points: "This is going to be safe. This is a sophisticated, vaccinated crowd." pic.twitter.com/OMao8suth3

Karni wasn't really the funny part of this hour. The funny part is Jim Acosta, acting completely bland and objective on Obama's very casual approach to COVID and large events, while denouncing Ron DeSantis as a lethal threat, within minutes of each other:

If Karni and the Times didn't want to get conservative hot-button coverage, she could skip the invitation to the Jim Acosta Show.