Ken Burns Rants That Mark Zuckerberg's an 'Enemy of the State,' Wants Him 'In Jail' 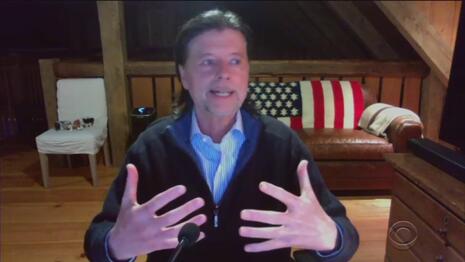 Fox News media reporter Brian Flood reports PBS superstar filmmaker Ken Burns is swaggering around again and dropping bombs on Facebook boss Mark Zuckerberg, suggested he’s an “enemy of the state” who should be in jail. Didn’t liberals hate this kind of “enemy of the people” talk, or is that just about the news media, not the social media?

Ken Burns made a gushy valentine of a film for the 2008 convention celebrating Senator Chappaquiddick, Ted Kennedy, so he might want to rein it about who should have been in jail. A woman drowned in his car, but Burns described Kennedy as "the little engine that could that keeps going every single day, adding something to our agenda, adding something to this country."

It happened on the “Sway” podcast from The New York Times, as he does interviews about his documentary airing next month on Muhammad Ali. Swisher asked him, “who do you think would be the version of Muhammad Ali in 100 years?” Burns replied "Stacey Abrams. She’s the person who has the closest chops to being somebody that we could carve into Mount Rushmore...She’s the real deal." Then he added "I hope Zuckerberg is in jail by then.”

Burns continued his Zuckerberg rant: "This is an enemy of the state, and I mean the United States of America. He doesn’t give a sh-t about us, the United States. He knows he can transcend it. He can get away to any place. And so it’s just about filthy lucre, that’s it."

Burns then turned his attention to Facebook COO Sheryl Sandberg.

"Because these people — and Sheryl is a complicit — the Nuremberg of this, is if it ever happens, which it won’t, will be pretty interesting," Burns said. "The way that we’ve been able to temporize and say, ‘Oh, it’s okay, we’ll just go a little bit further,’ right?"

Host Kara Swisher answered, "Yeah," and moved on to the next topic. How does Ken Burns suggest Jewish billionaires like Zuckerberg and Sandberg should get a “Nuremberg” trial, like the Nazis did? But Swisher just moved on to discussing deepfakes.

PS: Abigail Streetman reported on a different segment of the podcast, on Burns being hammered from the Left on being a white male from New Hampshire covering black topics like jazz and Mohammed Ali.