Author Slams Stelter: 'You're Full of Sanctimony,' You're Why 'People Can't Stand the Media' 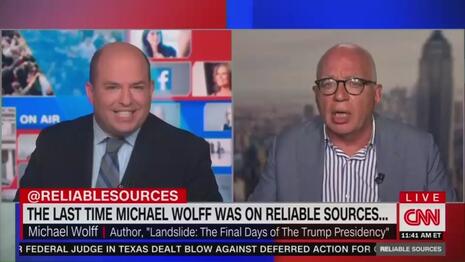 Four years ago, liberal author Michael Wolff came on Brian Stelter's Reliable Sources show and told him off. On Sunday, Stelter brought it back up: "You called me ridiculous. And you bashed the media. And then, the next day, Trump called you and you guys chatted for half an hour and you were all friendly."

Stelter implied Wolff gained access to the Trump White House by bashing CNN. So Wolff unloaded on him again:

Taking down @BrianStelter. @MichaelWolffNYC: “While you’re a nice guy, you’re full of sanctimony. You become one of the parts of the problem of the media. You come on here and you have a monopoly on truth....You are one of the reasons people can’t stand the media.” pic.twitter.com/pyrLpqgTmB

STELTER: You're cracking me up.

WOLFF: It's your fault.

All of this got Brian Stelter trending on Twitter, which he had to enjoy. This is shocking for the Stelter show, where the host asks softballs to the guests, and the guests play ball and don't challenge the host. Then it got weird, with Stelter suddenly admitting the media lives in a bubble, but fake-laughing at weird times.

STELTER: So, what should I do differently, Michael?

WOLFF: You know, don't talk so much, listen more. You know, people have genuine problems with the media. The media doesn't get the story right. The media exists in its own bubble.

WOLFF: You know, you -- you know, you got to stop -- I mean,  that last segment that I just had to listen to. Of all the people saying the same old stuff. [Perry Bacon saying the media had to oppose Trump fervently, and Charlotte Alter saying "the right-wing media apparatus is almost specifically designed to present an alternate reality."]

Also, you're incredibly repetitive. It's week after week. I mean, you're the flip side of Donald Trump, you know, fake news. And you say virtuous news. You know, there's a problem.

STELTER: No, we just figure out what is real. Yes, I'm listening.

STELTER: Well, then why'd you bother coming on CNN a few times this week?

STELTER: Michael, I love talking to you. I'm grateful you came on. And I guess let's do it again in four years. Thanks so much.

Wolff's critique of Reliable Sources is quite true. Stelter's show feels like a perpetual rerun of "Trump hates the media, the media needs to hate Trump, we are the forces of truth, conservatives live outside reality." Blah. Blah. Blah.