Don't hold your breath awaiting Michael Wolff's next appearance on CNN. Then again, perhaps CNN keeps inviting Wolff because they've learned he's good for ratings. Here's one viewer who is definitely tuning in next time I know he'll be on.

Shortly after Donald Trump's stunning victory in November, Wolff took fellow journalists to task for their collective fake outrage after Trump ditched them to enjoy dinner in New York City with his family, minus the media circus.

Since then, relentlessly negative coverage of Trump has only reinforced a widespread perception that many in media are motivated by the "new grail" of destroying Trump, Wolff suggested on CNN's Reliable Sources today. And Wolff, who writes columns for Newsweek and The Hollywood Reporter, included unusually blunt criticism of host Brian Stelter --

STELTER: Talking about this war with the media, that's what Trump calls it, you seem to think the media is also at war with Trump, is that fair? Because that's what you see. Can I read from ...?

WOLFF: Absolutely, I mean, I don't think that there would be anybody who would credibly disagree with this ...

STELTER: Many journalists say absolutely not, this is not a war against Trump.

WOLFF (incredulous): You know, the media (chuckles), it's just like, preposterous, and also the interesting thing is, then you can follow them on Twitter where they are having a very personal war with Donald Trump. But ...

STELTER: Or a war against lying and falsehoods.

WOLFF: ... very clearly at the center of this is this new grail that we have -- how are we going to take this guy down?

STELTER: Let me read from your Newsweek column (headlined "Why the Media Keeps Losing to Donald Trump"), let's put part of it on screen here. You said, "The media strategy is to show Trump as an inept and craven sociopath. The Trump strategy is to show that media people are hopeless prigs out of touch with the nation." And then you mentioned me. You said, the media correspondent for CNN "turns to the camera every Sunday morning and delivers a pious sermon about Trump's perfidiousness." I hope I pronounced that right. Tell me about that particular issue. Do you feel that my style is wrong or my substance is wrong trying to fact-check the president?

WOLFF: I think it's, and I mean this with truly no disrespect, but I think you can border on being sort of quite a ridiculous figure. It's not a good look to repeatedly and self-righteously defend your own self-interest. The media should not be the story. Every week, in this religious sense, you make it the story. We are not the story!

STELTER: You don't think there's room for one hour a week on CNN for this?

WOLFF: Listen, I love your show, I just wish you wouldn't turn to the camera and lecture America about the virtues of the media and everyone trying to attack it. The media will be fine. 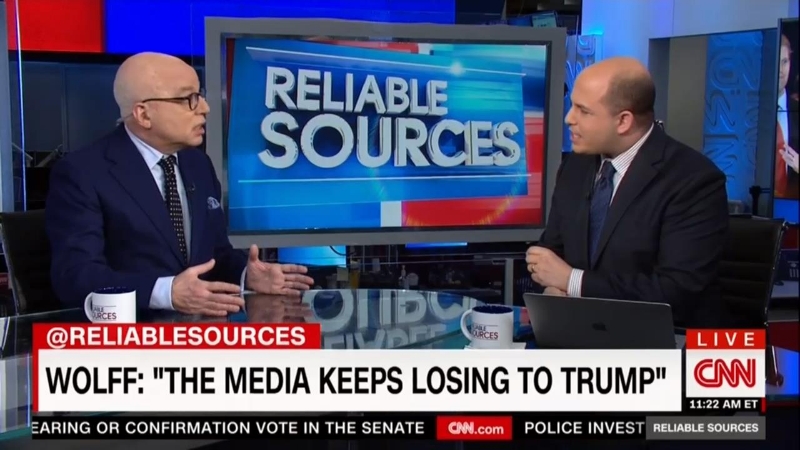 STELTER: The media doesn't need defending in this moment?

WOLFF: The media does not need defending by the media, certainly (Stelter laughs), you know, and so far the media is, I mean, the New York Times' front page looks like it's 1938 in Germany every day ...

STELTER: No it does not. Give me a break!

WOLFF: The New Yorker is, as I say, has left all of its standards behind and now become, you know, an opinion vehicle, constantly.

WOLFF: Look, I think all presidencies, all new presidencies are unusual. I think this is unusual and I think it's actually a great story which is why I am like all of us spending every day on it. But there's a very interesting distinction here to make and many people are not making this. We spend time on this story because it's so interesting.

WOLFF: Everybody else, however, is saying we spend time on this story because it's so appalling. So, where is the, where's the reality there? The truth is, we really like this. We really want to be on it. We are really, um, it's a kind of golden media age right now.

STELTER: That we can agree on, for sure. Michael, good to see you. Thank you for being here.

Stelter agrees, emphatically at that, with Wolff's premise that we are living in a "golden media age right now" -- all of a minute after Stelter had plaintively asked, "The media doesn't need defending in this moment?"

Kudos to the Reliable Sources host, though, for enduring that withering barrage with his dignity largely intact.