Panic at the New York Times: Leftists Are Losing Black and Brown Voters!

The results of the New York mayor's primary are causing a bit of panic inside The New York Times. Is it possible that the radical police-defunding leftists like Alexandria Ocasio-Cortez are not popular even among Democrats? National political correspondent Lisa Lerer penned a "Political Memo" on Friday under the headline "Progressives’ Urgent Question: How to Win Over Voters of Color."

New York City is terrible at counting votes, so the winner is still uncertain a week after the election, but ex-cop Eric Adams is leading: 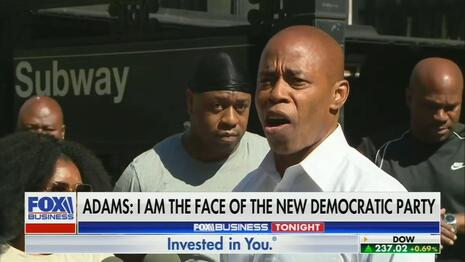 In a contest that centered on crime and public safety, Eric Adams, who emerged as the leading Democrat, focused much of his message on denouncing progressive slogans and policies that he said threatened the lives of “Black and brown babies” and were being pushed by “a lot of young, white, affluent people.” A retired police captain and Brooklyn’s borough president, he rejected calls to defund the Police Department and pledged to expand its reach in the city.

Black and brown voters in Brooklyn and the Bronx flocked to his candidacy, awarding Mr. Adams with sizable leading margins in neighborhoods from Eastchester to East New York.

The Times is alarmed to find an emerging trend, "a disconnect between progressive activists and the rank-and-file Black and Latino voters who they say have the most to gain from their agenda. As liberal activists orient their policies to combat white supremacy and call for racial justice, progressives are finding that many voters of color seem to think about the issues quite a bit differently." Consult the experts:

“Black people talk about politics in more practical and everyday terms,” said Hakeem Jefferson, an assistant professor of political science at Stanford University who studies the political views of Black people. “What makes more sense for people who are often distrustful of broad political claims is something that’s more in the middle.”

He added: “The median Black voter is not A.O.C. and is actually closer to Eric Adams.”

In her memo, Lerer seemed to agree with Adams that “if the Democratic Party does not recognize what we have done here in New York, [it’s] going to have a problem in the midterm elections and. . .in the presidential elections.” Get a load: "the traction some more conservative Democratic candidates like Mr. Adams have gained in Black and Latino communities threatens to undercut a central tenet of the party’s political thinking for decades: demographics as destiny."

Naturally, this is also a central tenet of the liberal media's political thinking for decades! They have perennially suggested that the decreasing white share of the American population spelled doom for conservatives. This is why there were jokes on Monday that defunding the police is so unpopular that the Democrats are now claiming the Republicans are doing it.