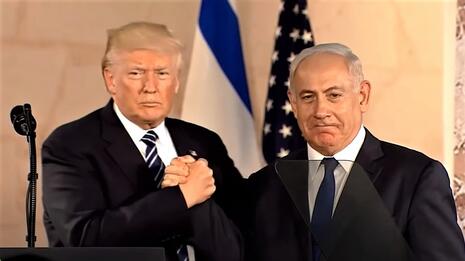 The New York Times front page on Thursday included an article by Ruth Graham and Liam Stack headlined "Anti-Semitism Surges in Wake of Gaza." They pronounced it scary that anti-Semitic violence is no longer just a "right-wing phenomenon" that was "emboldened" by President Trump.

Until the latest surge, anti-Semitic violence in recent years was largely considered a right-wing phenomenon, driven by a white supremacist movement emboldened by rhetoric from former President Donald J. Trump, who often trafficked in stereotypes.

What stereotypes are those? Trump was a staunch supporter of Israel as president. In 2019, Jewish Democrats were outraged when he suggested Jews don't love Israel enough. He also joked that wealthy Jews were not going to vote for "Pocahontas" (Elizabeth Warren).

The Times turned to Jonathan Greenblatt, a former Obama aide who now heads up the left-leaning Anti-Defamation League, who reported 222 incidents of anti-Semitic "harassment, vandalism, and violence" during the latest Israel-Hamas conflict:

Many of the most recent incidents, by contrast, have come from perpetrators expressing support for the Palestinian cause and criticism of Israel’s right-wing government.

“This is why Jews feel so terrified in this moment,” Mr. Greenblatt said, observing that there are currents of anti-Semitism flowing from both the left and the right. “For four years it seemed to be stimulated from the political right, with devastating consequences.” But at the scenes of the most recent attacks, he noted, “no one is wearing MAGA hats.”

President Biden has denounced the recent assaults as “despicable” and said “they must stop.” “It’s up to all of us to give hate no safe harbor,” he wrote in a statement posted on Twitter.

There isn't any mention of whether prominent Democrats are anti-Semites, starting with Ilhan "It's all about the Benjamins" Omar. But Graham and Stack threw in freshman Republican Marjorie Taylor Greene:

Jews and others were particularly stung by comments by Representative Marjorie Taylor Greene of Georgia, who has spent the past week repeatedly comparing mask and vaccine mandates to the treatment of Jews by Nazi Germany, and by the Republican leadership’s slow response to her remarks.

What this article truly lacks is how the Black Lives Matter movement has been attacked as anti-Semitic. But PolitiFact went out of its way last summer to get the liberals who run ADL to help bail out BLM on the charge:

Anti-Defamation League spokesman Todd Gutnik acknowledged in a statement that some individuals and organizations within the movement are spreading anti-Semitic rhetoric and "that raises serious concerns." But the league praised Black Lives Matter overall as the largest civil rights movement in at least 50 years.

"It is important to separate fact from fiction around claims that the huge, decentralized, nationwide Black Lives Matter as a whole is anti-Semitic or anti-Israel, or that it is part of the Boycott, Divestment and Sanctions campaign against Israel. It is none of these," the league statement said.