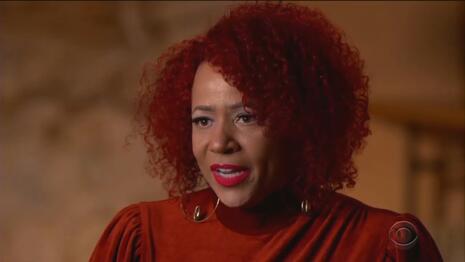 The glorification of history-mangling New York Times Magazine writer Nikole Hannah-Jones continues, despite her fractured 1619 Project. The University of North Carolina’s Hussman School of Journalism joyfully announced she will join the faculty as the “Knight Chair in Race and Investigative Journalism.” She's not leaving the Times, just adding this to the resume.

Knight professorships are endowed by the John S. and James L. Knight Foundation, the founders of Knight-Ridder Newspapers. There are “Knight chairs” at 21 universities across America. NPR listeners are familiar with underwriting announcements for the Knight Foundation. They’re part of the philanthropic segment of the liberal “legacy media.”

In the press release, Hannah-Jones proclaimed “I’m grateful for the opportunity to give back by helping students pursue their dreams and learn how to practice the type of journalism that is truly reflective of our multiracial nation.”

When asked about her teaching philosophy, Hannah-Jones said “I see classrooms as democratic institutions, where all students should be encouraged to participate, but where the instructor must understand that not all students feel equally empowered to do so,” she said. “I think it is critical that professors encourage students in their varied talents and experiences and give them equal weight within the classroom.”

But would a conservative student feel “encouraged to participate”? Or is this just about minority students feeling intimidated? Hannah-Jones was very happy to add her voice to the chorus demanding someone at the paper should be punished for daring to publish an op-ed against rioting by Sen. Tom Cotton, and told Brian Stelter the "rogue" GOP doesn't deserve equal weight in news coverage. She also helped force out Times reporter Donald McNeil for the offense of repeating the N-word in a private conversation about racial issues on a student trip to Peru.

But she's lauded as One of the Finest:

“This is the story of a leader returning to a place that transformed her life and career trajectory,” said Susan King, dean of UNC Hussman. “Giving back is part of Nikole’s DNA, and now one of the most respected investigative journalists in America will be working with our students on projects that will move their careers forward and ignite critically important conversations.”

“Nikole Hannah-Jones is one of the finest journalists of her generation, the rare mix of major investigative reporter and big-voiced writer. But she is much more than that,” said Dean Baquet, executive editor of The New York Times. “She is a born teacher and mentor. She demands that the industry hold itself to the highest standard. I cannot imagine anyone better to bridge the worlds of journalism, history and education.”

Seriously? In February 2020, the Times bought a $2 million ad during the Oscars selling their "1619 Project" with their slogan "The truth can change how we see the world." But a few weeks later, on March 11, the Times felt pressed to publish an “update,” a “clarification” on this grand, brand-building project. The "1619 Project" was based on the idea that slavery was “one primary reason the colonists fought the American Revolution.” It seems their point was not true. To imply that all of the American colonists were passionate advocates of slavery was a jarring smear.