The libertine left and their publicists in the “objective media” have a funny way of writing on their lobbying campaigns against troubling traditions like the “gender binary.” It goes like this:

1. Push the revolution from the fringes by testing the supposedly outdated cultural boundaries  – say, putting “trans women” in girls’ sports.

2. Define the conservative reaction as a “culture war” – as if you didn’t start this fight. 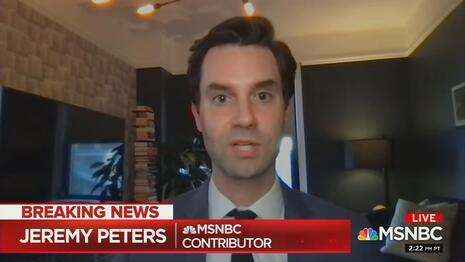 A case in point was a March 30 front-page article by New York Times headlined “Transgender Girls in Sports Are New G.O.P. Culture War.” Times reporter Jeremy W. Peters writes like a gay activist, because he is one. In 2008, Out magazine touted Peters, then a "rising star" based in Albany for the Times, as one of “Our Boys on the Bus” in the national media elite.

Peters used the word “conservative” 10 times, and variants of “the right” three more times. Conservatives were the ones who “restrict rights for transgender people,” as they stand on “one of their last footholds in the fight against expanding L.G.B.T.Q. rights.” They push laws that “single out transgender people for exclusion and feed ugly stereotypes.” Conservative culture "often reduces the nuanced issue of gender identity to a punchline about political correctness.”

The leftist ACLU (touted twice) and the Public Religion Research Institute were cited with no labels. A “left-leaning” group appears once – in an amazing way.

Peters reported this transgender-athlete kerfuffle “is much more widely covered in conservative media — and often presented with a heavy dose of sarcasm.” And who did they hire to study the conservative media?

“According to a review of social media content conducted for The New York Times by Media Matters, a left-leaning watchdog, seven of the 10 most popular stories about the proposed laws targeting transgender people so far this year were from the Daily Wire, a website founded by Mr. [Ben] Shapiro. Two others were from Fox News. Combined, the articles were read, shared and commented on six million times, Media Matters said.”

Suddenly, the Times is outsourcing its research on conservatives to a hard-left organization – one of the most toxic character assassins of the cancel culture -- and boasting about it. The Times is swimming in revenue, but somehow it needs help discovering that “targeting transgendered people” is a hot conservative topic.

On Twitter, Geoffrey Ingersoll of the Daily Caller hit the Peters article just right. It’s “insane to frame it like conservatives are just cynically using women to advance a malicious policy agenda, as opposed to, you know, trying to preserve and protect an otherwise marginalized group in sports.”

As much as the Left wants to pretend that outrage over this progressive "inclusion" is untethered to reality, Peters noted a lawsuit filed in federal court in Connecticut by three female runners who lost races to trans women. There is an actual debate here. It's just that the Times is buying research from radicals who want to cancel one side.