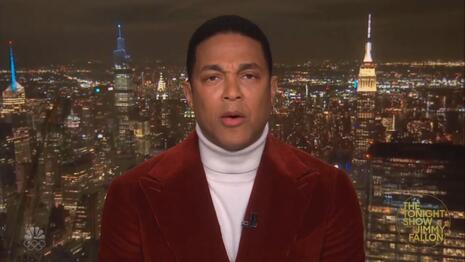 CNN anchor Don Lemon's publicity tour for his book on racism continued on National Public Radio on Sunday morning. Weekend Edition Sunday host Lulu Garcia-Navarro wasn't so much asking questions as she was reading passages from the book and helping him sell his theories.

For example, after announcing his message to blacks is to forgive if not forget on race, Garcia-Navarro said "you also have a message to your white brothers and sisters, as you just say, which is, stop saying you aren't racist. You know, stop trying to defend yourself against something that you benefit from. Society is racist. You have to work hard to change it."

See, not a question, just a verbal cue. He echoed himself:

LEMON: You do. People get so upset by the idea of the possibility that someone may think that they are racist or biased or bigoted in any way. What's the most important thing? Is it the racism, the bigotry or the bias that's most important, or is it the perception or the feeling that someone may think of you that way? Is it about your fragility, your ego, or is it about the actual thing that is?

And I think if people can really think about that question in an honest way, then they will understand the frustration, and there will be some self-correction because oftentimes, people get indignant about - how dare you say that I am racist? How dare you do that? Why is that so - why does that hurt you or threaten you so much than the actual act of racism?

Because you somehow don't need to prove us guilty of "an actual act of racism"? You can just blame a "system" and say we benefit from it unfairly.

What's really funny is that Lemon had just claimed his book was about "unity rather than division," so just admit you're a racist. Stop being divisive by objecting to my smear. Of course, that wasn't the only comical statement. He also claimed he wasn't a political person!

LEMON: I could have written, Lulu, a number of books during the Trump administration because every time the president would tweet about me, or say something offhanded about me, or some backhanded way, someone would reach out and say, why don't you write a book? I didn't want to do that because I'm not a political person, and I didn't want to write a political book. And this book is about being human. It's about unity rather than division. And that's a book that I wanted to write.

NPR is just like CNN -- broadcasting the liberal viewpoint 24/7 -- except we pay for this version.

To tell NPR how you feel about this softball session with Don Lemon smearing all white people with an ugly broad brush, contact Public Editor Kelly McBride here.