Pompeo knows life wouldn’t be as exciting – because none of these reporters want to make life difficult for Joe Biden. As one conservative tweeted, "They're basically coming out and telling us they'll go on vacation again if Biden wins."

But Pompeo claimed Trump won’t be endangering reporters any more: 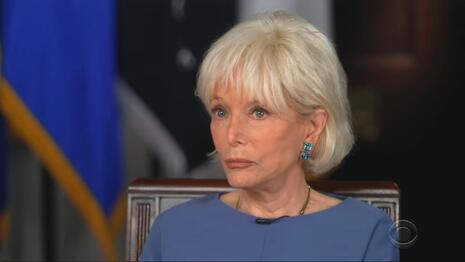 This past Tuesday, two days after CBS racked up a soaring 17 million viewers with its Sunday-night broadcast of the Stahl interview, TMZ reported that “a death threat” had been “made to the home of one of her immediate family members on the West Coast. We’re told the network has guards monitoring the homes of Lesley and her family members, and escorting them if they go out in public.” (CBS declined to comment.)

The Stahl episode was a shining example of how the president’s dogged and dangerous anti-press rhetoric has cast the media as one of the villains of the Trump drama. Trump laid out his strategy to Stahl shortly after winning the 2016 election—“I do it to discredit you all and demean you all,” he reportedly said—and he hasn’t relented these past four years.

For journalists, death threats now just come with the territory. Ditto doxxing, or being attacked at a campaign event, or risking one’s personal safety and general well-being. Never mind the whiffs of anti–First Amendment sentiment hanging in the air, or the bad-faith attacks to discredit honest and truthful reporting, or the frighteningly pervasive rejection of reality, propagated by sketchy social media accounts and propagandistic cable-news hosts.

Pompeo cannot imagine how that last line can be turned around on the liberals -- because he presumes all journalists are liberals. Now think of the Hunter Biden scandals, and the "bad-faith attacks to discredit honest and truthful reporting, or the frighteningly pervasive rejection of reality, propagated by sketchy social media [ahem, barons] and propagandistic cable-news hosts."

If a liberal calls in death threats to the New York Post, does Joe Pompeo care? Or do the "propagandists" deserve to be intimidated?

Pompeo turned for wisdom to his buddy at the magazine Joe Hagan, who said on a podcast "The complete concentration of attention around Trump’s news cycle—it’s the media equivalent of Kim Jong Un banners on every wall, on every building in North Korea.” If Joe Biden wins the election, there will inevitably be a crash of tweets and doomscrolling and web traffic and subscriptions and cable-news ratings, but after that, Hagan continued, sounding more hopeful, there will be a return to some semblance of normalcy, where 'we as journalists, we as whatever it is you do, are gonna have to, like, go back to your life, and what a relief that will be.'”

When Democrats are in power, reporters can take it easy, work 9 to 5, and insist that the dullness of Democrats running the country is a blessing, not a curse. And "there would no longer be someone behind the presidential seal calling reporters disgraces and fakes" -- unless you were a conservative reporter asking questions Biden doesn't want asked.