Trevor Noah's tenure as host of The Daily Show on Comedy Central is nearing five years, so they're reaching out for the expected positive publicity from the liberal media. Michael Ordona at the Los Angeles Times proclaimed that it's great the comedy isn't so central any more on Comedy Central. 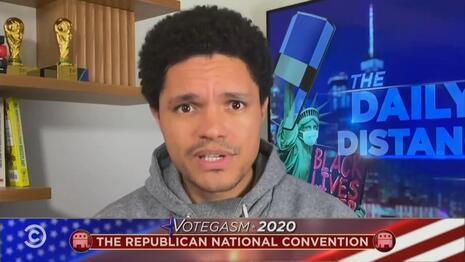 The Daily Show With Trevor Noah has gone from being jokes about the news to, more and more, the news with some jokes. If comedy is tragedy plus time, perhaps this is a natural evolution when we’re too close to the second part of that equation to produce a lot of laughs.

But from the location of what’s being called The Daily Social Distancing Show With Trevor Noah (his New York apartment), the host says, “If anything, it’s an unnatural evolution. Sometimes you are forced to become more of yourself because of something that happens to you or the world around you."

Noah claimed the jokes are still important, but "I no longer have to choose between ‘Joke’ and ‘What I want to say.’ ”

Somehow the paper didn't notice Noah has provided an unfunny leftist platform to Joe Biden, Hillary Clinton, Susan Rice, Andrew Cuomo, a whole parade of Democrats. They helped him by only noting his interview with Dr. Anthony Fauci.

Ordona touted that the show's ratings are up since Noah started doing the show at home, and stopped, well, trying to be funny. He also tried to claim that America right now somehow compares to.... South Africa under apartheid???

“I think in many ways I’m meeting an appetite by satisfying my own,” Noah says. “I’m going to try to voice my opinion and step out a little more than usual. I owe some of that thinking to a friend and mentor by the name of Dave Chappelle. He said, ‘Anyone can be funny; not everyone is interesting. Don’t discount your point of view, the world you’ve lived in, the country that has shaped you, the journey that you’ve lived through in how you see the world.’ ”

Born during apartheid (when Noah’s very existence as a mixed-race child was illegal), the Johannesburg, South Africa, native has witnessed a nation in upheaval before. He recognizes it now.

“Living in this period in America, as much as I hate to say it, a lot of the things that I’m seeing are similar to what we experienced in South Africa. Mass unemployment, a government that doesn’t seem to have the best interests of the people at heart. People who are getting angrier and angrier.” 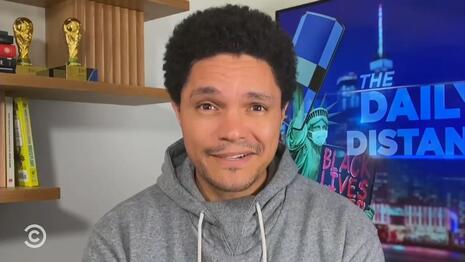 Isn't Trevor leaving out...the racial segregation? How on Earth do you compare 2020 America to that? He can slice some blatant baloney like this, and then the Times lets him claim " we’re also trying to create a show that’s as honest as it can be.”

PS: Last month, CBS Sunday Morning hailed Noah as he lectured there's no wrong way to protest when "Police in America are looting black bodies." Jim Axelrod called that "Not chasing laughs, chasing light." (This isn't that surprising, since Comedy Central is a property of ViacomCBS.)

The touting of "honest and real" Trevor Noah also happened at IndieWire.