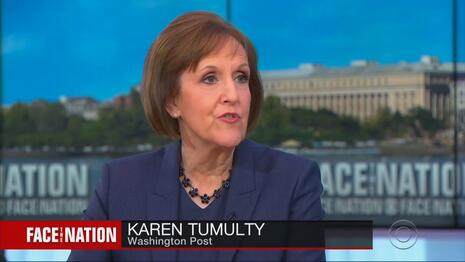 The pull quote gushed that “political veterans say the harmony she has fostered with the Democratic National Committee and the party’s liberal allies is smoother than anything seen in decades.”

But it’s the disclosure in paragraph three that drew attention from conservatives:

O’Malley Dillon, 43, has been transforming what had been an underfinanced, undisciplined and dysfunctional Democratic primary operation into a general-election machine capable of carrying Biden through to the November election. (Disclosure: My adult son works for the Biden campaign.)

This presents a rather obvious conflict of interest when writing about the Biden campaign. We all want our adult children to have promising careers, but this certainly colors every gushy thing Tumulty writes about the Biden campaign. Tumulty is married to Los Angeles Times correspondent Paul Richter, and they have two sons, Nicholas and Jack. Google suggests Nicholas was born in 1992, so he's an "adult son," but I don't yet know if he's the right Richter.

After some biography, Tumulty turned to the big picture, which was very Democratic:

The sudden crash of what had been a robust economy has demolished what had been the chief argument for four more years of Trump. Six in 10 Americans disapprove of the president’s erratic — at times, unhinged — handling of the pandemic. Amid multiple crises, voters have developed a deeper realization that the president’s narcissism and lack of empathy are not personality quirks; they are how he governs.

And of course, trapping the gaffe-prone, hard-to-manage Biden in his Delaware basement has an upside as well. What voters have seen over the past months is an uncharacteristically crisp and disciplined candidate. Biden has generally stayed on script as he rolled out a series of meaty policy proposals to address the problems at hand, including his plan to restore the economy and his strategy to deal with climate change.

The near-flawless debut of his running mate, Sen. Kamala D. Harris (D-Calif.), is a measure of how well the Biden operation is clicking.

The best argument against pressing Tumulty to avoid covering the presidential campaign is that she still sounds like every other liberal columnist at that Democrat bubble called The Washington Post after many years as a supposedly straight news reporter. Her last piece laid the groundwork for her shilling for the Biden/Harris campaign: “The qualities that hampered Harris’s campaign could be the ones that make her an ideal running mate.”