No one knows why The Washington Post deployed their fashion writer Robin Givhan to cover the Big Tech hearing for Thursday's Style section. She worked in two mentions of her Amazon overlord. "And even a tech wizard like Jeff Bezos sometimes forgets to unmute himself." How cute. And then: "Amazon's Bezos sat in front of a wall of honey-colored shelves with a distinctly mid-century modern feel."

The online headline was "Tech titans gave their House testimony virtually. But it was the congressmen who departed from reality."

As you could expect, Givhan thought reality had a liberal bias. She listed some leftist Democrats and their sensible concerns, including about predatory Amazon. "Rep. Pramila Jayapal (D-Wash.) hammered Bezos about whether Amazon swipes data from the small companies that sell their wares on the site, and Rep. Mary Gay Scanlon (D-Pa.) peppered him with questions about the great diaper wars in which Amazon crushed ­Diapers.com."

Then she turned to ripping on the conservatives:

Rep. Matt Gaetz (R-Fla.), who once wore a gas mask on the House floor to mock the novel coronavirus and then later had to quarantine after being exposed to it, accused Google of being supportive of the Chinese military.

From newspapers that see trashing conservatives as one of the fringe benefits of their employment package, it's easy to dismiss the "poor, poor conservatives" and their complaints that the social media is beginning to curate them into a corner like the "news" media. But Givhan really loathes Rep. Jim Jordan (R-Ohio), the target of a previous Robin rant about his jacketless-ness. 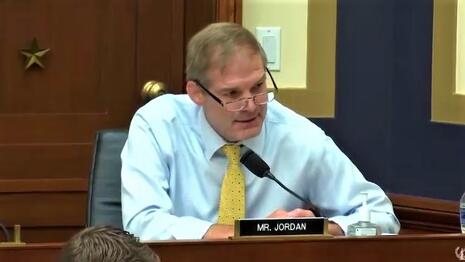 Is the jacketless Jordan a member of every single committee of the House of Representatives? He always seems to be up there on the dais yelling into the microphone, with his reading glasses perched on his nose.

Wednesday afternoon, he was yelling about whether Google’s Pichai would promise that the search engine would not do anything to support Joe Biden’s presidential campaign. Pichai looked perplexed. Jordan wanted him to affirm that Google wouldn’t help former vice president Biden. Pichai tried to explain that the search engine is nonpartisan. Jordan badgered. Finally, Pichai said Google wouldn’t support either candidate. Jordan didn’t seem particularly satisfied, but his time was up, and the baton was handed to Scanlon, who announced that she’d be getting back to questions about antitrust issues and leave the conspiracy theories behind.

And then Jordan had a fit because conservatives have feelings, too. So he started yelling again. And he was told to put on his mask. And, well, oh, boy, it was as childish as it all sounds, and one couldn’t help but wonder whether some of our representatives are drinking the hand sanitizer instead of using it for good hygiene.

After all that, she noted "The hearing was billed [by the Democrat majority] as an investigation into online competition. And much of the evidence laid out before Bezos, who owns The Washington Post, speaks to ruthless business practices." She didn't include ruthlessly attacking your enemies as sanitizer-guzzling goons.