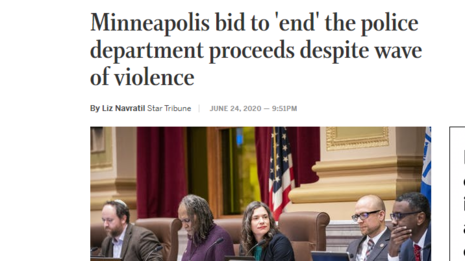 Radicalism in America’s largest cities seems impervious to reason. Consider this headline in the Minneapolis Star Tribune: “Despite a wave of violence, Minneapolis 'defund police' effort continues: An influential bloc of City Council members is pressing ahead with plans to dismantle the department as a monthlong eruption of gunfire sent tremors through neighborhoods.”

[The original headline was changed, as you can see to your right.]

Reporter Liz Navratil explained that a majority of the Minneapolis City Council and like-minded community activists have used terms like “defund,” “dismantle,” and “abolish” in different ways. There’s some semantic tap-dancing. But they’re serious. They’re working to rewrite the city charter and dismantle a “minimum size requirement” for the police department. They talk about a “police-free future.”

A protester named Maisah Outlaw insisted “This isn’t the first time an institution that is rooted in racism has been abolished. It’s not impossible.” She claimed “We don’t need to scare people and beat people into submission.” Who's going to be scared and beaten after the police go away?

The radicals behind this movement don’t just tweet about abolishing the police. They also talk about abolishing prisons. If violence is the problem, how is emptying the prisons the solution? What next? Abolish the courts? These activists seem to think only police officers commit the kind of violence worth protesting. Prosecuting violent crimes like burglary, rape, and murder is apparently racist. To speak of black-on-black crime is treated like a distraction employed by racists.

One has to wonder if this is really the kind of stance that people will support at re-election time. But it seems the pendulum only swings further to the Left. In many American big cities, they keep re-electing Democrats to run their cities, for decades on end. Many mayors and police chiefs are minorities. If “systemic racism” is rampant in America, how does that explain the systemic progressivism that keeps failing? 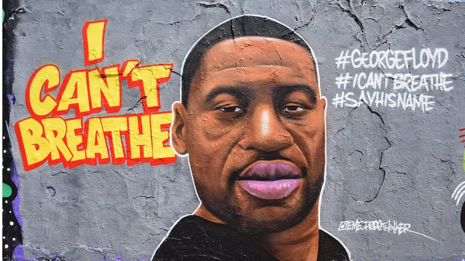 In the meantime, people who commit crimes are acting. With at least 113 people injured or killed in shootings since George Floyd’s death on May 25, some locals are “asking urgent new questions” about the potential effects of defunding the police. Do these elected officials fail to imagine what could happen if you “dismantle” the police force? The consequences of their utopian naivete?

Steven Belton, president and CEO of the Urban League Twin Cities, told the Star Tribune he believes all this Defund the Police advocacy “has emboldened criminals and sparked a new wave of violence.”

But city council member Steven Fletcher claimed they often don’t need armed officers when “It’s so much more common that we’re showing up [and] the person has already left who has committed the crime.” So should police officers show up at crime scenes unarmed, assuming the crook fled the scene? That seems to be the suggestion…if the cops still have jobs in the coming years.

The radical experiment is coming. Cities will send social workers instead of police to deal with domestic violence complaints and drug overdoses. Will unarmed social workers never be harmed in these volatile situations? Will they wish they had an armed cop backing them up?

Can liberal big-city newspapers be trusted to report on the aftermath of an overreaction? Or will they be too torn by inner newsroom turmoil over racial politics to paint an accurate picture for their community? It's not like they can afford to get this wrong as their business model erodes.