Thursday’s front page of The New York Times was topped with a story headlined EX-JUDGE ATTACKS FLYNN REVERSAL AS ‘GROSS ABUSE’. To the left of this screechy anti-Trump headline was this:

Biden Is No Stranger to Grief, or to Consolation
Presidential Candidate Stakes a Bid on His Capacity to Heal

Barf. This is one of those election-year front pagers that read like advertisements. Like this beauty in 2012: “Obama Seizes Chance to Score As an Everyman.” 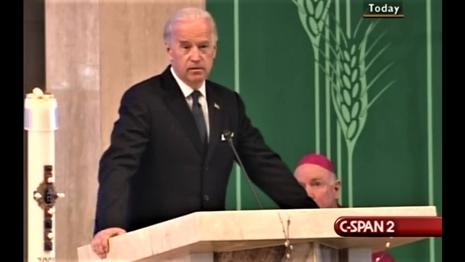 An overstuffed binder sat in Joe Biden’s Senate office, holding the raw materials of his grief.

It was a master collection, aides recalled, with remarks, notes and drafts of eulogies Mr. Biden had given through 2008 — for childhood friends, prominent senators, his own father. The table of contents was long enough to use every letter of the alphabet. It included a section of favored passages, often deployed in his remembrances, labeled “Quotable Quotes: Death.”

“Death is part of this life,” one such axiom read, “and not of the next.”

And it has been, in many ways, the defining part of Mr. Biden’s.

The compilation, never before detailed publicly, is the sort of trove that few but Mr. Biden could amass, or even think to — a meticulous testament to the mixture of mourning and resilience that has shaped virtually every aspect of his personal and political history.

This is somehow Pulitzer Prize-level “Investigative Reporting,” digging into Biden’s healing powers, after he lost a wife and daughter at the dawn of his political career in 1972, and then lost his son Beau to brain cancer five years ago:

But the scope of the personal losses Mr. Biden has endured, and his fluency in discussing death — a subject many elected leaders hope to avoid — go beyond what is commonly understood.

A Times review of nearly 60 eulogies Mr. Biden has delivered, as well as interviews with more than two dozen friends, former staff members and relatives of those he has eulogized, offer an intimate window into how he sought to comfort those joining him in mourning, and how he would seek to lead a nation grappling with death and devastation.

Inside the paper is a two-page spread with examples of Biden’s handwritten notes and subheads including “Comforting the Living,” “Validating the Dead,” and “Hallmarks of a Biden Eulogy.” 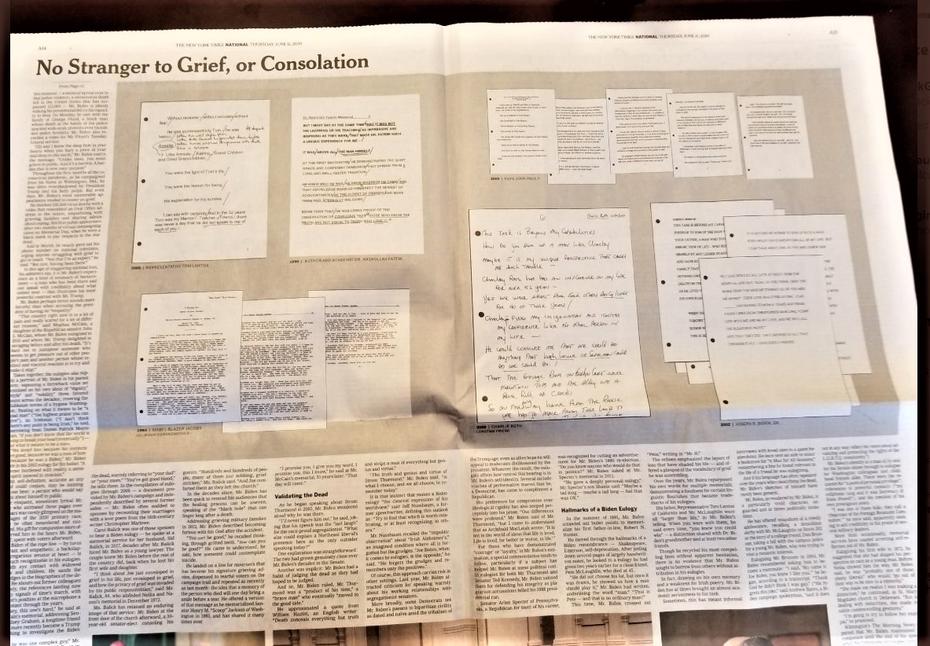 In this age of staggering national loss, his admirers say, it is Mr. Biden’s experience as a kind of emissary of bereavement — a man who has been there and can speak with credibility about what comes next — that illustrates his most powerful contrast with Mr. Trump.

Mr. Biden perhaps never sounds more forceful than when accusing the president of having no “empathy.”

“This country right now is in a lot of pain and really scared for a lot of different reasons,” said Meghan McCain, a daughter of the Republican senator John S. McCain, whom Mr. Biden eulogized in 2018 and whom Mr. Trump delighted in savaging before and after his death. “It’s hard not to juxtapose someone who seems to get pleasure out of other people’s pain and another person whose instinct and visceral reaction is to try and make it stop.”

When The New York Times channels the views of Biden's "admirers," it's basically talking about themselves.