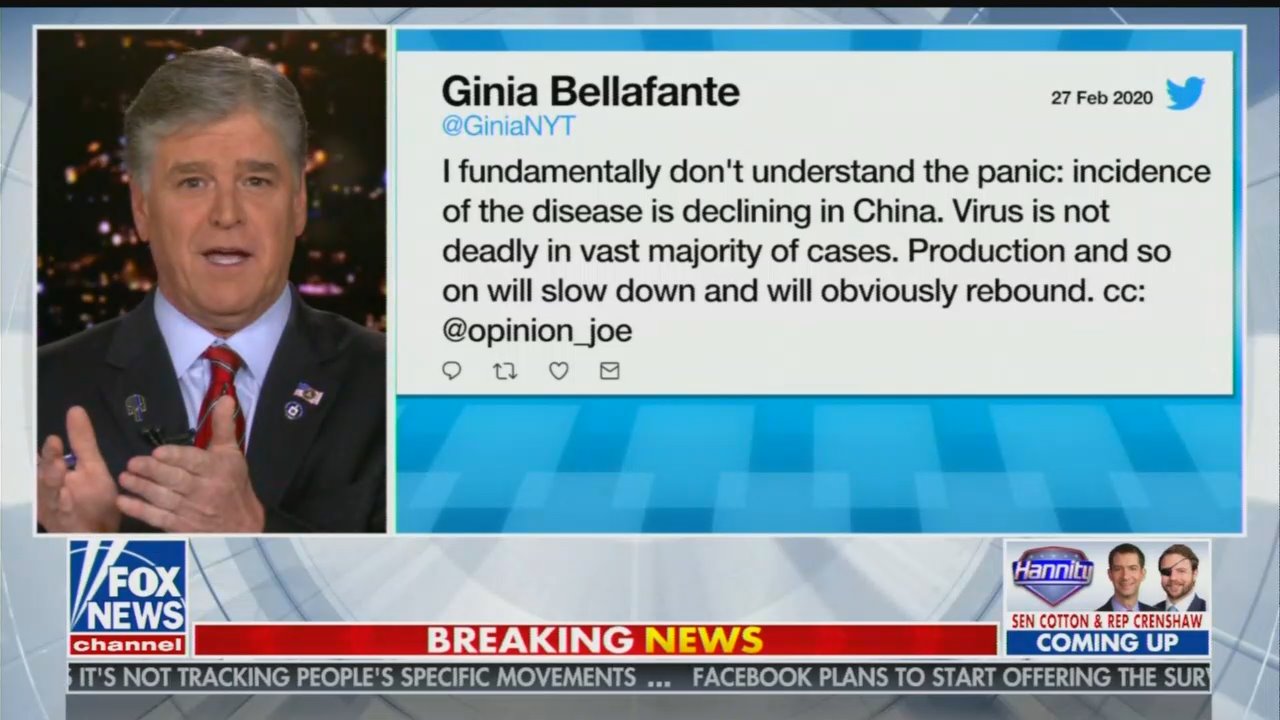 On Monday night, Fox News host Sean Hannity went after a New York Times hit piece by Ginia Bellafante suggesting he and other Fox News hosts caused the death of a 74-year old Brooklyn bartender from the coronavirus, since they downplayed the dangers.

The best part of Hannity's segment came when he pulled out a tweet from February 27 (what liberal reporters call "the lost month" for action) in which Bellafante proclaimed "I fundamentally don't understand the panic. Incidence of the disease is declining in China. Virus is not deadly in vast majority of cases."

The virus isn't deadly in the vast majority of cases. But it can be deadly, and its spread is sneaky and vicious. Bellafante played up the family grieving their loved one's cable-news habits:

“He watched Fox, and believed it was under control,’’ [his daughter] Kristen told me.

Early in March Sean Hannity went on air proclaiming that he didn’t like the way that the American people were getting scared “unnecessarily.’’ He saw it all, he said, “as like, let’s bludgeon Trump with this new hoax.”

Hannity said "This is the kind of rampant hypocrisy, negligent behavior that is so widespread."

We study the effects of news coverage of the novel coronavirus by the two most widely-viewed cable news shows in the United States – Hannity and Tucker Carlson Tonight, both on Fox News – on viewers' behavior and downstream health outcomes. Carlson warned viewers about the threat posed by the coronavirus from early February, while Hannity originally dismissed the risks associated with the virus before gradually adjusting his position starting late February....

We then turn to the effects on the pandemic itself, examining health outcomes across counties. First, we document that greater viewership of Hannity relative to Tucker Carlson Tonight is strongly associated with a greater number of COVID-19 cases and deaths in the early stages of the pandemic. The relationship is stable across an expansive set of robustness tests....

These estimates also show that greater exposure to Hannity relative to Tucker Carlson Tonight is associated with a greater number of county-level cases and deaths.

It was Hannity who was really rolling out an "expansive set of robustness tests."