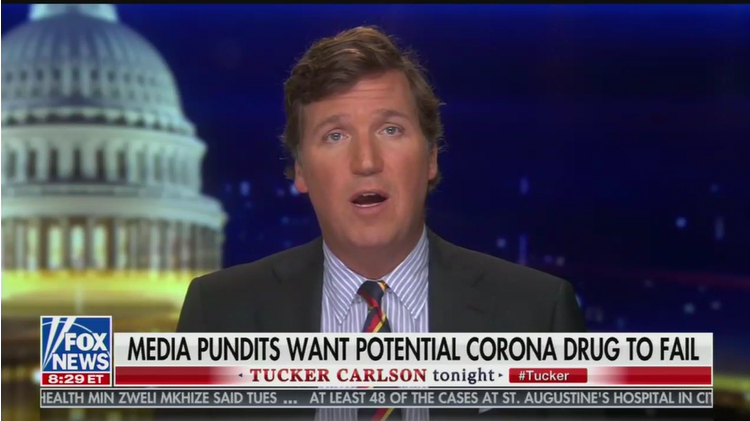 This might spur mental pictures of Sean Hannity and Laura Ingraham flying a plane dropping herbicides on the coca fields. But it’s not an illegal or addictive drug.

Online, the headline was “For Fox News hosts, the hydroxychloroquine controversy is fuel for the culture war.”

Fox News has promoted this drug as a hopeful sign, which some coronavirus sufferers have touted as an amazing cure, and mocked the liberal media that have hounded Team Trump for daring to say positive things about it on television.

Farhi hyped this as “another front in a long-running culture war against an array of supposed enemies, who are again standing in the way of what they hold to be righteous and true.”

He’s writing this in a newspaper running a long war on President Trump under the dramatic front-page motto “Democracy Dies in Darkness.” Trump is “standing in the way of what they hold to be righteous and true.”

Weirdly, Farhi claimed the liberal media have been “cautious and hedged,” raising the question what is he watching?

But even in his own story, Farhi noted Jesse Watters was highlighting how Rachel Maddow said Trump was “telling people a fairytale like that is cruel and harmful and needlessly diverting and wildly irresponsible from anyone in any leadership role.”

She also said "President Trump today, again, just flat-out wrong in public about this malaria drug that has gotten stuck in his mind, quite some distance from the facts." That ain’t “cautious and hedged.” It carries as much “ferocity” as Farhi is tagging Fox for unloading.

Early on, Farhi quoted a Tucker Carlson commentary from Tuesday: “Watching people in the media talk down a potentially life-saving medicine because a politician they don't like has endorsed it is probably the most shameful thing I -- as someone who has done this for 20 years -- I've ever seen, is making a lot of us ashamed to work in the same profession as those people.”

But he didn’t note Carlson had a played a medley of CNN stars downplaying the drug, including Dana Bash insisting Trump “He is pushing things that are absolutely not proven. It's not just a role, it is veering into the dangerous!”

Farhi completely avoided the “miracle cure” story that Carlson and Laura Ingraham put on this week – interviews with Michigan state Rep. Karen Whitsett, a Democrat from Detroit, who came down the coronavirus, and credits her doctor prescribing hydroxychloroquine – and President Trump touting the anti-malarial drug on TV – for saving her life.

The Washington Post is still skipping that story altogether -- alongside the rest of the liberal media establishment. This is Fox's point. These outlets appear to be suppressing any positive anecdote about this drug so they can trash President Trump for pushing "false hope," as Brian Stelter claimed on CNN. He wasn't cautious and hedged, either.