SPIKED: Only Fox Talks to Democrat Saying She Was Saved by Trump and His 'Miracle Drug' 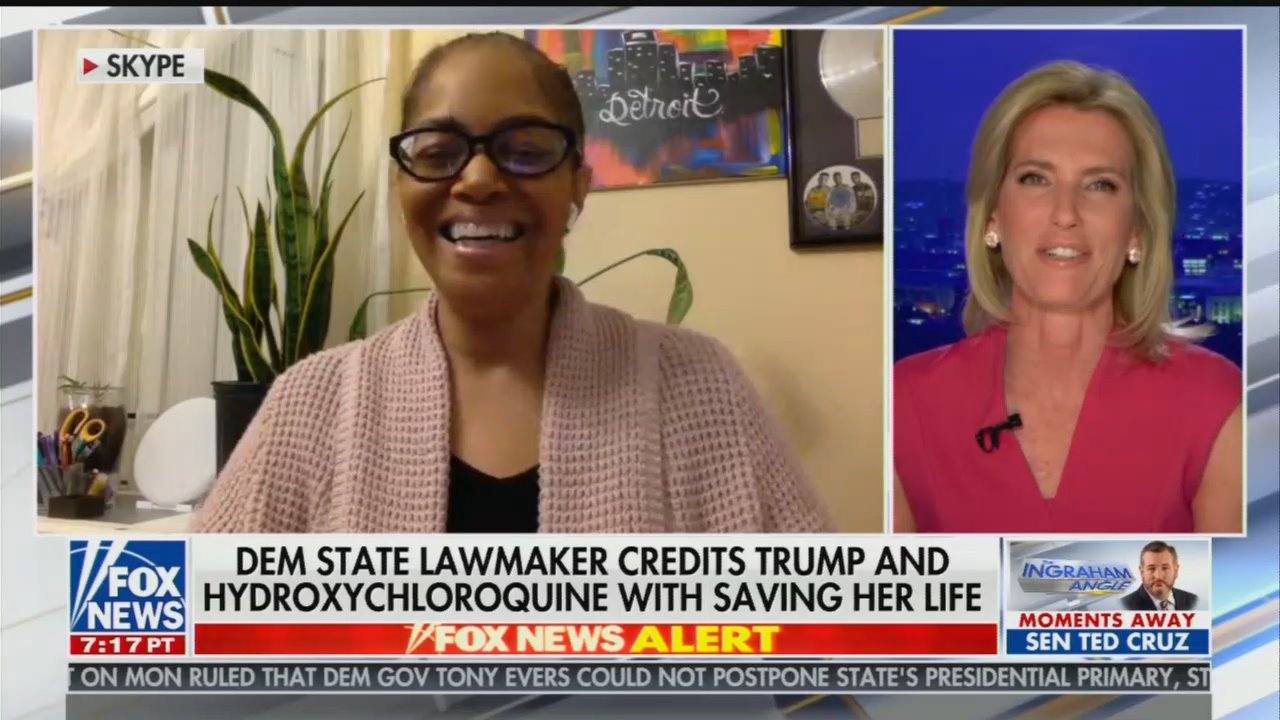 As many liberal journalists suggest Fox News Channel should be sued for discouraging people from taking the coronavirus seriously and endangering lives, Fox News is offering hopeful stories that almost every liberal outlet refuses to touch.

Take Michigan state Rep. Karen Whitsett, a Democrat from Detroit, who came down the coronavirus, and credits her doctor prescribing hydroxychloroquine – and President Trump touting the anti-malarial drug on TV – for saving her life. Whitsett told her story on The Ingraham Angle on Monday night.

Even after that appearance, there has been nothing on ABC, CBS, CNN, MSNBC, NBC, NPR, and PBS. Associated Press, The New York Times, and The Washington Post were also AWOL.

The local Detroit Free Press reported her story on Tuesday, but somehow the Gannett paper couldn't get that story into their national newspaper USA Today. Laura Ingraham asked when she received the medicine:

WHITSETT: I did not receive it until the day I actually got tested for Covid-19 and that was March 31. And I just plummeted that day. I mean, I went from 0 to 100 in that time and it went from the headaches to being extremely severe to fluids building up in my lungs to sweats breaking out, the cough. My breathing being labored. It all happened in a matter of hours and I really didn't have any time between my husband and myself Jason to make a decision on whether, do I go to the hospital which I honestly did not want to do and it has nothing to do with the care that I thought I would receive their or the first responders or the nurses that are there.

It had nothing to do with them, it's the fact that the hospitals were full near my area and that I honestly believe that once I got into something like that, I may not actually come out and that was my biggest fear and I knew that this medication will possibly save me.

"Yes, and it was on that day, so you can imagine how terrified I was that you know, I had to really beg and plead and go through a whole lot to try to get the medication, Whitsett said. "And my husband was able to pick that prescription up that night and I was better within a couple hours."

Whitsett and her doctor appeared on Tucker Carlson Tonight on Tuesday night. After this second recounting, Carlson thanked Whitsett for her courage to appear on Fox, and then added:

CARLSON: Well, it feels weird to say this and it's hard to believe, but the recovery you just heard about, the recovery of Representative Whitsett may be sad news for a lot in the media.

They have been fanatically wedded to the idea that hydroxychloroquine is useless, even dangerous. Why do they think this? Because the President hoped otherwise. We're not exaggerating.

He then showed a montage of CNN talking heads denouncing the "miracle drug" that President Trump has touted as in most cases a much preferable option that needing to be intubated and put on a ventilator. Carlson concluded:

CARLSON: Watching people in the media talk down a potentially life-saving medicine because a politician they don't like has endorsed it is probably the most shameful thing I -- as someone who has done this for 20 years -- I've ever seen, is making a lot of us ashamed to work in the same profession as those people.

So reckless and wrong in the middle of a pandemic. 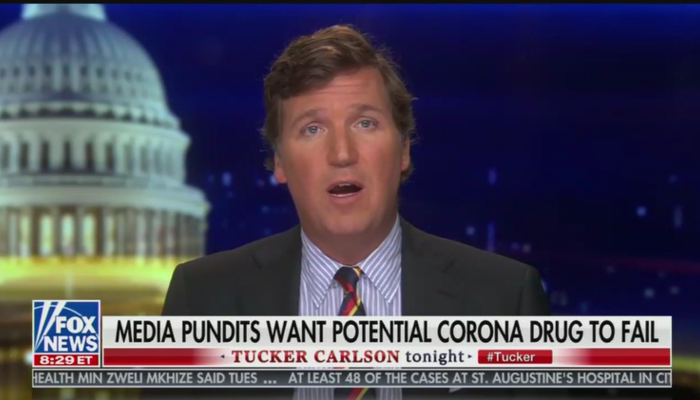 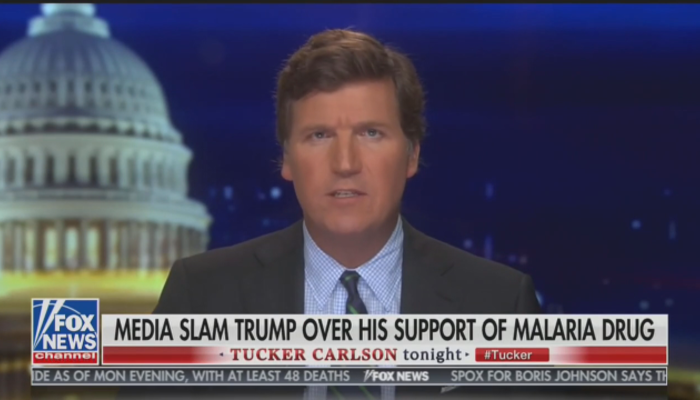 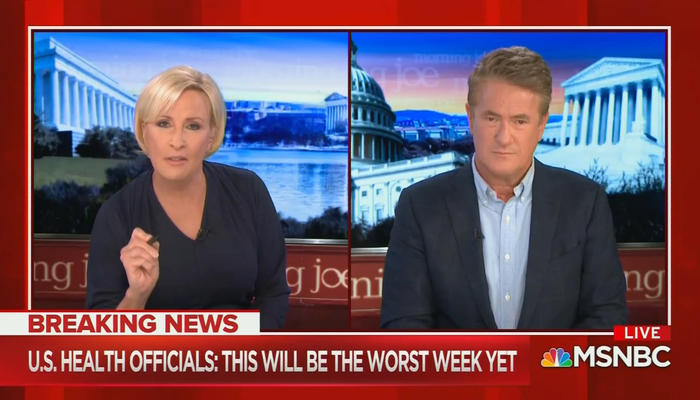 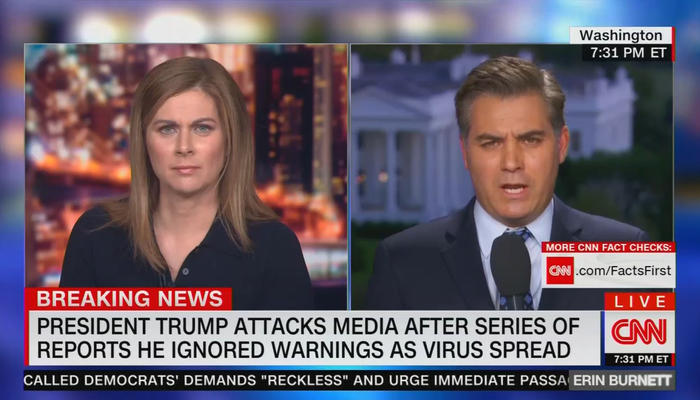 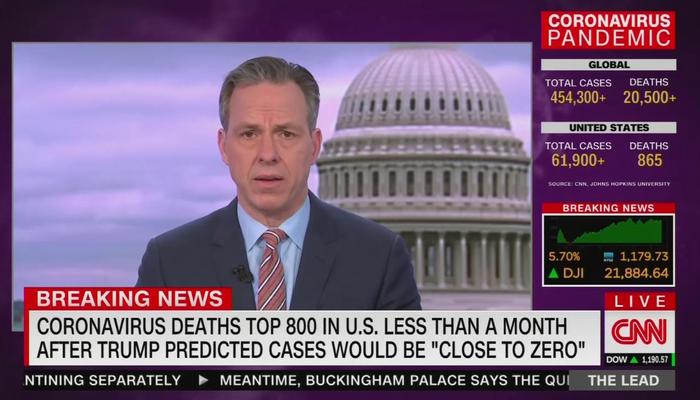 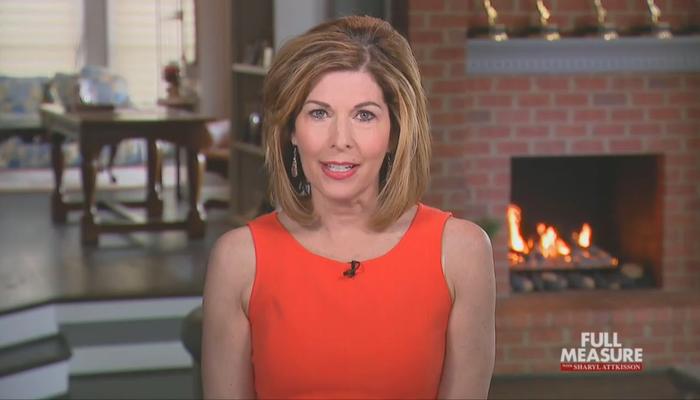 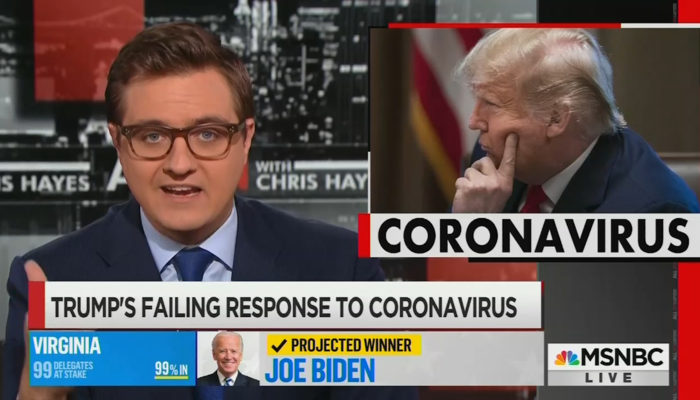 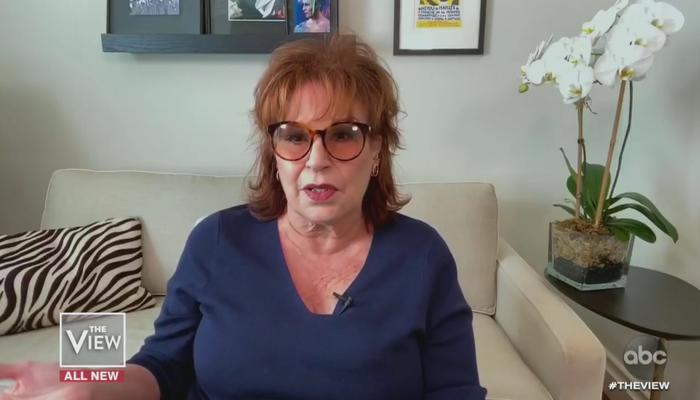