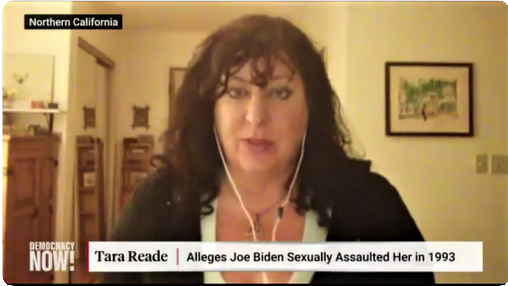 On March 25, Tara Reade, a former employee of Senator Joe Biden, made a disturbing accusation about her old boss. She claimed in a podcast with Katie Halper of Rolling Stone that Biden sexually assaulted her in a secluded area of the Capitol in 1993, pushing her against a wall, kissing her and penetrating her with his fingers.

Like many accusers, Reade cannot prove this happened. The Biden campaign quickly denied it. “Women have a right to tell their story, and reporters have an obligation to rigorously vet those claims,” deputy campaign manager Kate Bedingfield said in a statement. “We encourage them to do so, because these accusations are false.”

But are those obligated reporters rigorously vetting these claims? Are there reporters pounding the pavement and droning incessantly on their cellphones over this? There’s no sign of that.

The networks haven’t said a single word about them….even as Biden did an hour-long town hall on CNN, as well as interviews on NBC and MSNBC, then on CNN and MSNBC again. So in the week after the allegations emerged, there were 55 questions to Biden, and not one on this accusation. But NBC’s Chuck Todd asked Biden if President Trump has “blood on his hands” in the coronavirus response.

There should be a presumption of innocence, and the mere launch of these charges can sully an image unfairly. This accusation emerging from a sketchy source like Rolling Stone underlines that. Journalists appear to be very sensitive…when the target is a Democrat. How can they fail to see the double standard?

This was not the standard for Supreme Court nominee Brett Kavanaugh in 2018. The broadcast networks offered more than 300 minutes on several accusers who told wild stories of teenaged sexual assaults that could not be proved in any way. Accusers like Christine Blasey Ford couldn’t manage to offer a time or a place for her alleged assault – less than Reade did. But she instantly became a profile in courage, "cemented" as a "historic figure."

During the Kavanaugh hearings, his accusers were warmly embraced (metaphorically) by one Joe Biden: “For a woman to come forward in the glaring lights of focus, nationally, you’ve got to start off with the presumption that at least the essence of what she’s talking about is real.”

There’s nothing on the Biden story on NPR – the proud purveyor of the unproven Anita Hill accusations against Clarence Thomas – and nothing from The New York Times. They somehow found space two years ago for a front-page story claiming Kavanaugh threw ice cubes in a bar scuffle at Yale.

There’s no evidence of investigative journalism from The Washington Post, which first published Blasey Ford’s incredibly vague accusations. At the time, as they aggressively prosecuted the nominee, Post executive editor Martin Baron protested “the conspiracy theories are pure nonsense” that the Post was cooperating with a Democratic plot to derail Kavanaugh. As the late Wes Pruden used to say, there wasn’t a conspiracy, just a consensus.

The Post was also first to jump on the Access Hollywood tape recording in 2016, in which Donald Trump assaulted no one, but bragged about how he could assault women, because he was a TV star. They took about four whole hours in one afternoon before they published. It seemed like the entire political elite – Republican and Democrat – were demanding Trump drop out immediately.

Where are all these people now, with Biden in the dock? Absent. Apathetic. Callously indifferent. Out to lunch, never to return? #MeToo dies in darkness.